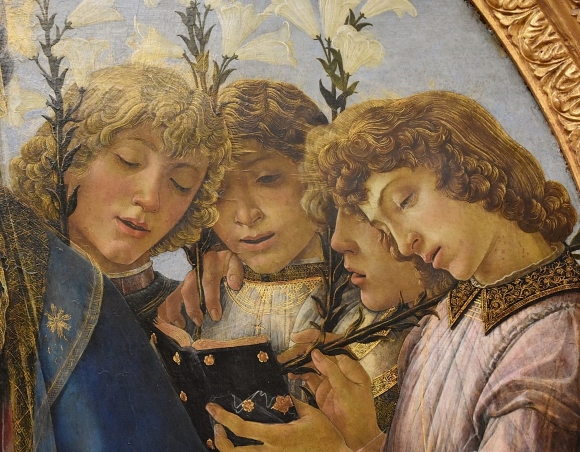 A Theology of Singing

By Br Pablo Rodríguez Jordá | In the second of our series of Gospel meditations, Br Pablo reflects about the role that music and beauty play in our understanding of heavenly realities.

Two weeks ago, I was finishing an essay on the Synoptic Problem: the question of how the gospels of Matthew, Mark and Luke relate to one another and to other ancient sources. At some point I was, admittedly, a bit saturated – as you might be, after a whole day reading about ‘Q’ (a collection of the sayings of Jesus that some scholars think circulated in the ancient world, and which the gospel writers used), Markan Priority (the thesis that Mark’s gospel was the first to be composed), or the Griesbach Hypothesis (which holds that Matthew was written before Luke, and Mark depended on both of them). So, as I have discovered happens often to me when I am saturated writing an essay, I began to read extensively about the Synoptic Problem, and to look up all sorts of information that had nothing to do with the essay question but gave me some reassurance that I was doing something productive.

One of the many not very useful things that I looked up was pictures of the authors I had to read. I thought it would be amusing, if you have to spend a lot of time with the Griesbach hypothesis, to find out what Griesbach’s face looked like – and, as you can imagine, it looks rather stern. One of the people I looked up was a name that kept coming up in most of the readings: B.H. Streeter. Streeter was an Oxford scholar whose claim to fame is to have popularised the Two Source Theory in Britain in its most widely accepted form (the idea that the synoptic gospels essentially derive from the gospel of Mark and the document ‘Q’, with some additional sources). Streeter’s face looks somewhat stern as well, with a certain air of melancholy, but what immediately struck me was that he was wearing Anglican clerical robes; he was, it turned out, a member of the Archbishop’s Commission on Doctrine of the Church of England.

I say I was surprised because he was not an outsider coming from the secular academy, but someone very much on the inside, and it is difficult to underestimate the impact that the Two Source Theory had, not only on Synoptic Scholarship, but on the world of Christian belief at large. It exerted a certain ‘disenchantment’, if you wish, of the way we look at the Gospels, regarding them just as any other written document, subject to the contingencies of textual transmission. More interestingly, Streeter presented the evidence for his views as ‘irrefutable’ and ‘definitive’, and there is no need to say that a hundred years later the synoptic problem is still a source of ‘delight’ for those of us who have to write essays about it, and that the arguments that Streeter used have been challenged, and indeed refuted in some cases.

Now I don’t say this to sit in judgment over Streeter or his theories, but simply because this little moment of reflection was a helpful reminder for me – especially as I begin my studies in theology –, a reminder that in theology, and to some extent also in philosophy, we often approach ‘holy things’ under the expectation that we are to examine them critically, take them apart and pass judgment on them, but often the reverse is true. Our scholarship can lead us astray; our cleverness is confounded. It is the Word of God that passes judgment on us; a word that ‘searches the heart and examines the mind’ (Jer. 17:10). ‘Is not my word like fire and like a hammer which breaks the rock in pieces?’, says the Lord (Jer. 23:29).

In today’s reading St Paul declares that ‘the Word of God is a sword’.  Indeed, all the readings have a rather warlike tone. They evoke the Word of God preparing for battle, going up to Jerusalem to confront doom. Jerusalem was also a city of learning, a literate society, full of scholars and experts in law, biblical studies, liturgy (and perhaps even dogmatic theology). And yet they did not receive him. ‘O Jerusalem, Jerusalem killing the prophets and stoning those who are sent to you! How often would I have gathered your children together as a hen gathers her children under her wings, and you would not. Behold your house is forsaken’ (Luke 13:34-35).

These words should challenge us, as people constantly exposed to the word of God, though at the same time I also think we can claim a special protection from this judgment, and that is connected to one activity we perform every day, an activity that takes almost as much of our time as studying, and that will certainly outlive our time as students, and that is singing.

One of the main presuppositions in Streeter’s theory was that Christianity is a bookish religion, a religion that deals primarily with written documents. Against that, today we have a theology of the spoken word of God, alive in the Church and in her proclamation, but one may also wonder what a theology of the sung word of God would be like.

Singing is essential part of Scripture, from the quasi-liturgical rhythm of the opening verses of Genesis, all the way down to the choirs of angels and of the saints in Revelation. Our Lord would have probably cantillated the Hebrew Scriptures in the synagogue, and his Passion resonates with the echoes of the Psalms. The difference that all this singing makes, then, is that it perhaps reveals in a unique way that the Word of God proceeds from love, is vibrant with love. It reminds us that we cannot understand something intended to elicit our love, unless it moves us, unless we first perceive it as beautiful.

Now I’m aware I’m coming dangerously close to comparing our singing to the heavenly choirs, but there is no question here of good or bad singing: ‘individual’ skill or talent is irrelevant. Just as the great commandment for all Christians is to love, the specific form of that commandment for us Dominicans, or at least one of its specific forms, is to join in the song of the Church. Fragmentation, individualism, the multiplication of scholarly opinions has come about only after reducing the Word of God to a written object. But the sung word is participative, it brings about union. It is certainly safer to hide behind the study of a written text, because singing exposes us, displays our imperfections, makes us vulnerable to the criticism of others, and is bound to go wrong at some point. But in this, singing is no different from the keeping of the great commandment.

And so perhaps our chant is one of the weapons God has given us to combat the ‘disenchantment’ of our contemporaries; to disclose, even in a faint echo, the ancient music, the song of the Trinity that has gone on from the beginning. Our best protection then is to join in, to cooperate with Christ in reminding an unbelieving world: “you will not see me until you sing, ‘Blessed is he who comes in the name of the Lord’” (Luke 13:35).

This reflection was originally preached at Compline before the student brothers