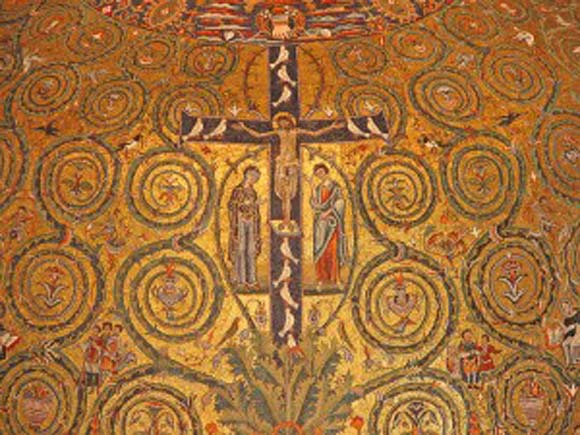 When Paul writes about the cross of Christ, he normally means something more than the tree of the cross, the way of the cross, or even the moment of crucifixion itself. It is the death of Christ and its implications for the human race that is the subject of Paul’s teaching or reflection. What does he make of it then?

First of all for Paul, the death of Christ on the cross is a life-giving act. The cross is the tree of life because we can all live a new life by participation in the death of Christ. This is what the sacrament of Baptism means: ‘the dipping in the death of Christ’ so that we may rise with Him again. It may seem a paradox that the cross should become such a symbol, but still, the cross never stands on its own separated from resurrection. We cannot chop up the acts and words of Jesus and treat them separately – each of them is only well considered when we look at it in the light shed by other.

Secondly, when we are made to share in the cross and death of Christ this does not make us any better people. Consider the following passage: ‘For as in Adam all die, so also in Christ shall all be made alive’ (1 Cor 15:22). The temptation is to see it as a judgement on what we were before Christ came, a judgement that would essentially mean that we are evil by nature, because we all share in one nature that is subjected to death. Such a reading is obviously misguided. Paul is not re-writing the beginning of the book of Genesis here. Rather is he explaining the importance of the death of Christ: His death has a universal reach, salvation is available to all through the cross, and this is just as sure as the fact that all who are share in Adam’s nature die. Christ’s death is an act of re-claiming for his own something that he has always had: ‘Christ died and lived again, that he might be Lord both of the dead and of the living. Why do you pass judgment on your brother? Or you, why do you despise your brother?’ (Romans 14:9-10).

There is no place then for elitism among the believers: Christians by virtue of being Christians are not made any better people than those who do not believe. All that God created was very good (Genesis, 1:31), and Paul is not denying it here.

For St Paul then the cross is not a sign of division and warfare, it is the source of love and unity for all. We draw our strength from the fact that we share in it in baptism, and following the cross we can flourish even in difficulties, having the courage to choose what is true and helping others on their way. We are to support them above all by preaching Christ to them.