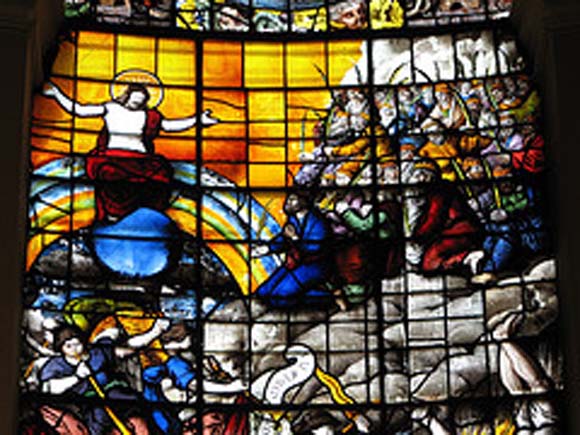 For the Lord himself shall come down from heaven with commandment and with the voice of an archangel and with the trumpet of God: and the dead who are in Christ shall rise first. Then we who are alive, who are left, shall be taken up together with them in the clouds to meet Christ, into the air: and so shall we be always with the Lord (1 Thessalonians 4:16-17)

On several occasions within his epistles, Paul dramatically and vividly describes the parousia, the coming of the Lord in judgement at the end of time. A common characteristic of all these passages is the apparent nearness of this parousia. And yet Paul does not assert that the coming of the Saviour is at hand. In each of the five epistles wherein he expresses the desire and the hope to witness in person the return of Christ, he at the same time considers the probability of the contrary hypothesis, proving that he had neither revelation nor certainty on the point. He knows only that the day of the lord will come unexpectedly, like a thief (1 Thess 5:2-3), and he counsels the neophytes to make themselves ready without neglecting the duties of their state of life (2 Thess 3:6-12).

A particular circumstance of St. Paul’s preaching is that the just who shall be living at Christ’s second advent will pass to glorious immortality without dying. Although the coming of Christ will be sudden, it will be heralded by three signs, general apostasy (2 Thess 2:3), the appearance of the Antichrist (2:3-12) and the conversion of the Jews (Rom 11:26).

In line with the synoptic authors, Paul views the judgement as closely connected with the parousia and the resurrection. They are the three acts of the same drama which constitute the Day of the Lord: “For we must all be manifested before the judgment seat of Christ, that every one may receive the proper things of the body, according as he has done, whether it be good or evil” (2 Cor 5:10. See also 1 Cor 1:8; Phil 1:6, 10; 2:16). Thus the judgement on that day will be upon all the living and the dead, and none shall escape, for that judgement will be universal. The judgement of each one will then be made on account of their works, as all people will be brought to account for their use of their freedom.

St. Paul’s eschatology is not as distinctive as it has sometimes been presented. Perhaps its most original characteristic is the continuity of the just between the present and the future, between grace and glory, between salvation begun and salvation consummated. A large number of terms, redemption, justification, salvation, kingdom, glory and especially life, are common to the two states, or rather to the two phases of the same existence linked by charity which “never falls away”. The eschatological message of Jesus urges us to keep alert always, because we do not know the time when the actual end will happen. If Paul adds to this, it is by exhorting us to be consistent with what we know to be true. Our identification with Jesus is as important as Jesus’ identification with us. Paul understands that we are already united with Jesus in His death and resurrection.