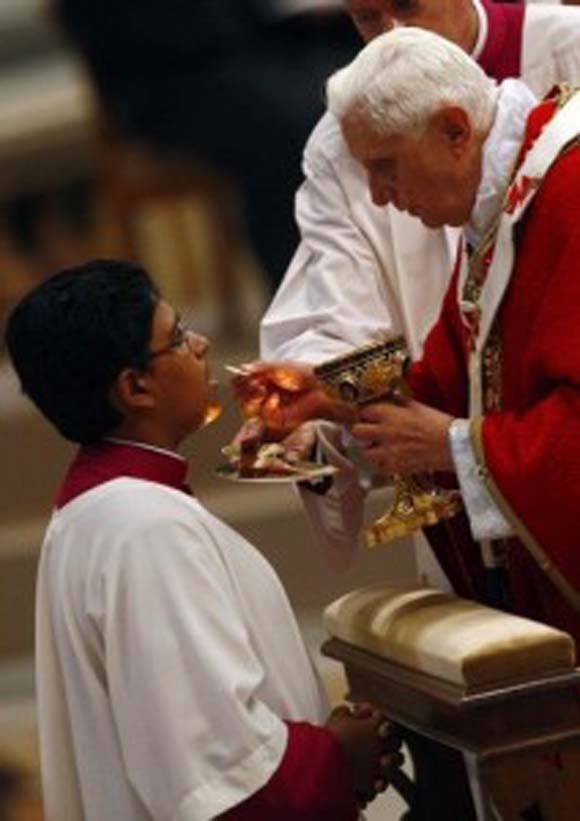 What does it mean for us to receive Holy Communion? The Greek word St Paul uses in 1 Corinthians 10:16 is koinonia, and so that verse may be translated thus: “The cup of blessing which we bless, is it not a communion in the blood of Christ? The bread which we break, is it not a communion in the body of Christ? Because there is one bread, we who are many are one body, for we all partake of the one bread.” Paul used this word frequently to signify the relationship that we have with one another because of our common salvation in Christ. Through his saving body and blood, we are united and held in fellowship, koinonia, by the Holy Spirit.

This sacred fellowship of all the baptised who are united in the Spirit is called the Church. We become the Mystical Body of Christ because, having been baptised into Christ, we receive his Body and Blood in the Eucharist. Holy Communion is thus a sign of the holy koinonia we share; it is a mark of our unity and love for one another, precisely because we have been called together as God’s people and continue to be transformed by the Eucharist into the Body of Christ, the Church.

St Paul strongly berates those who gather for the Eucharist but remain divided from their fellow Christians (see 1 Cor 11:18-34). Indeed, he says that the one who “eats and drinks without discerning the body eats and drinks judgment upon himself”. On one level we can say that this refers to those who do not realise that the Eucharist is the real Body and Blood of Christ, but we can also see that St Paul refers primarily to those who receive Holy Communion but do not discern that our Eucharistic koinonia is a sign of the real unity and communion that exist among us in the Church, the Mystical Body of Christ. Therefore, the Church also teaches that grave sin wounds our communion with God and one another. Thus, communion has to be restored through the sacrament of Reconciliation (penance, or confession) before one can receive the Eucharist with integrity.

Moreover, as Pope Benedict has said: “The Eucharist is the sacrament of communion between brothers and sisters who allow themselves to be reconciled in Christ, who made of Jews and pagans one people, tearing down the wall of hostility which divided them (see Eph 2:14). Only this constant impulse towards reconciliation enables us to partake worthily of the Body and Blood of Christ” (Sacramentum Caritatis 89).

Furthermore, since Holy Communion is an expression of the unity of the entire Church, we should not make the Eucharist into a celebration of private groups and cliques thus dividing the Church into various parties. Rather, as the Pope, when he was Joseph Ratzinger, reminded us, Holy Communion calls us out of ourselves into the Body of Christ, “beyond all boundaries and divisions [so that the Mass] becomes a point from which a universal love is bound to shine forth”, drawing others into the unity of the Church and communion with God.

Finally because of the essential communion that exists among Christians, St Paul also speaks of koinonia as a sharing of finances, of helping to further the preaching mission, and of sharing in the sufferings of Christ and of the members of the Church. Thus, ideas of Christian charitable aid, prayers for one another, and solidarity with poor and persecuted Christians around the world, are all expressions of our sacred communion in Christ that is rooted in the sacrament of Holy Communion.