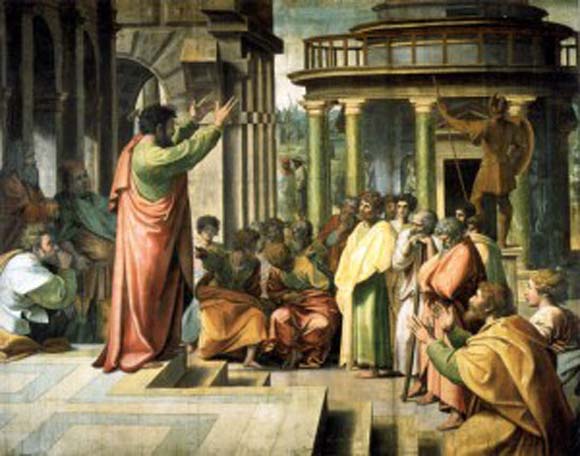 Is there not a deep irony in the fact that God chose a Pharisee to be the apostle to the Gentiles? Paul was a Pharisee and a son of Pharisees (Acts 23:6). Pharisaism was a lay movement, centred on study of the Torah, the Law of Moses, which believed that to study the Law was itself obedience to the Law. He trained in Jerusalem at the feet of Gamaliel, one of the great teachers of the time (Acts 22:3; 26:4). The Pharisees were a strict sect (Acts 22:3; 26:5), zealous in their service of God and of His word in the scriptures. We are indebted to Paul himself for this striking description: I was, he says, ‘as to the law a Pharisee, as to zeal a persecutor of the Church, as to righteousness under the law faultless’ (Philippians 3:5-6).

Within Judaism, the Pharisees contrasted with the priestly Sadducees, not only in their position within the hierarchy of Judaism but also as regards their beliefs. Paul plays on this in his trial in Jerusalem, noticing that his accusers are made up of both Pharisees and Sadducees, and saying that the reason he is on trial is because of his faith in the resurrection of the dead. The Pharisees shared this belief and the hope it offers, the Sadducees did not. So the two groups end up fighting with each other (Acts 23:6-10).

Paul was not only a clever but also a learned man. Pharisaism was an urban rather than a rural movement and so tended to be more sophisticated and cultured than other movements within Judaism. Paul knows the Bible through and through and is familiar with Jewish traditions about it and ways of interpreting it. He also knows a lot about Greek philosophy and is keen to engage with the philosophers in Athens (Acts 17). When Festus, one of the Roman officials trying him at Caesarea, cries out in exasperation, ‘Paul you are mad; your great learning is turning you mad’ (Acts 26:24), Paul replies calmly that he is not mad but speaking ‘the sober truth’. He does not deny, though, that he is a person of great learning! His testimony at Athens, Jerusalem and Caesarea show him to have been equally at home with Hebrew and with Greek.

On a number of occasions Paul explains how he has been faithful to his original zeal and dedication even if both fellow Jews and fellow Christians find it difficult to see how this was so. ‘According to the Way’, he says, ‘I worship the God of our fathers, believing everything laid down by the law or written in the prophets, having a hope in God which these themselves accept, that there will be a resurrection of both the just and the unjust’ (Acts 24:14-15). Later he repeats this: ‘I stand here on trial for hope in the promise made by God to our fathers, to which our twelve tribes hope to attain … and for this hope I am accused. Why is it thought incredible by any of you that God raises the dead?’ (Acts 26:6-8). He presents himself as a radical Pharisee, ‘saying nothing but what the prophets and Moses said would come to pass, that the Christ must suffer, and that, by being the first to rise from the dead, he would proclaim light both to the people and to the Gentiles’ (Acts 26:22-23).

Abraham’s faith in a God who raises the dead becomes central to Paul’s thinking once he has encountered the risen Lord on the road to Damascus (Romans 4:17). Paul’s ‘faultless righteousness’ on the basis of his study of the Law is shown up to be worth nothing compared with the knowledge of Christ, the first to be raised from the dead. Having once been zealous for the Law he is now zealous for Christ. This Christian Pharisee now regards everything else as so much skubala (a term that means ‘dung’ or ‘excrement’) compared with gaining Christ Jesus and being found in him (Philippians 3:7-11).