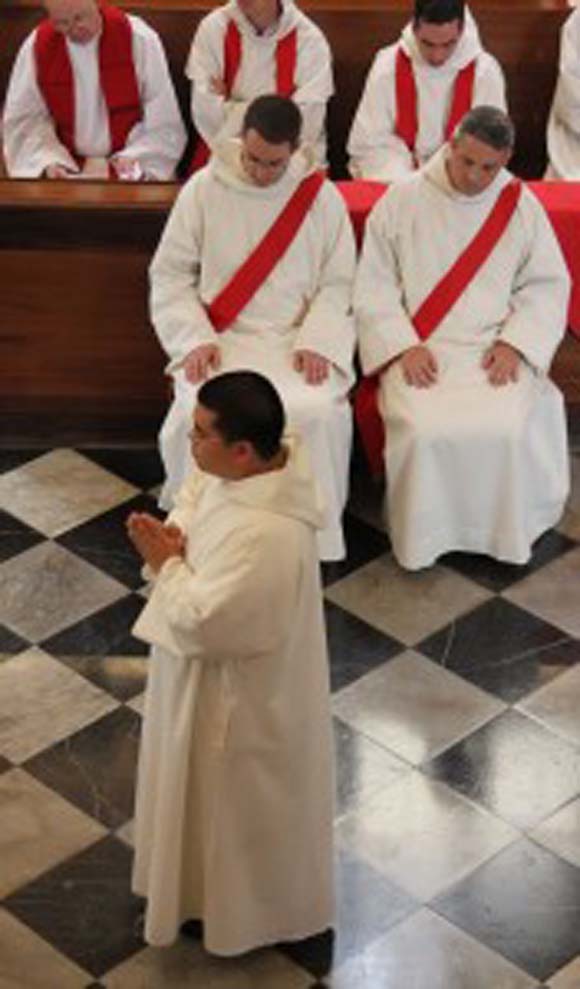 A – Z of the Mass: Vestments

By Lawrence Lew O.P.
25
Clothing is important. It covers our nakedness, keeps us warm and protects us from the elements. But clothing also indicates the role of a person, his or her dignity and status in a community; clothing has a practical as well as a symbolic function. Both these aspects are found in the Christian tradition. St Augustine said that clothing alleviates the shame and nakedness of fallen humanity and St Paul likens baptism and the conferral of baptismal grace and our Christian dignity to being clothed in Christ (see Galatians 3:27). St John in the Apocalypse speaks of those who have conquered sin and death as clothed in white robes (see Apoc 3:5, 7:9).

The white robe has a particular resonance for Christians. It is given to the newly-baptised in the baptismal rite, and from this ancient usage is derived the monastic habit, as well as the liturgical garment called the alb. The name of this garment, whose form resembles the ancient undergarment called the tunica, points to the very fact that it is a white garment. For alba means white in Latin. This simple white garment is a reminder of our baptismal dignity, of the purity of those who are washed in the blood of the Lamb, as well as a sign of our willingness to follow Christ, and to die with him, even in martyrdom.
As a sign of our common baptism, then, it is “the vestment common to ministers of every rank” (GIRM §298). There was a time when the newly-baptised adults of the early Church would wear this garment to church every day during the Easter octave. For this reason, the Sunday after Easter Sunday was called Dominica in albis, since it was only on that day that the newly-baptised removed their white garments, presumably for practical reasons. This practice, and its Biblical origins, shows that liturgical vesture had a symbolic purpose very early on.
Over the alb, the liturgical ministers of the early Church initially wore their best formal clothing. This was secular clothing which had insignia that mirrored the rank or office of secular and civic offices in the Roman state. It is not entirely clear how the insignia and garments of Roman officials and judges came to be adopted by the clergy. Some suggest that from the 4th century, after the peace of Constantine, clergy were given ranks equivalent to Roman officials and judges. In any case, it is after the 4th century that garments specially reserved for the liturgy are mentioned, as opposed to simply the best formal clothing one had. What may have contributed to this distinction was a shift in fashion: the Germanic breeches had come to be adopted by secular society, and the clergy retained the older form of Roman secular garments. In time these developed in shape and form, and came to have specific Christian significance attached to them to separate them from secular garments. Hence, St Jerome said that “the Divine religion has one dress in the service of sacred things, another in ordinary intercourse and life”.
It is sometimes said that the Church’s adoption of vesture was influenced by pagan practices. However, it is noteworthy that the emperor Julian the Apostate (d.363) complained that the Christians dressed up in special clothes to worship God. Moreover, we have seen that symbolic clothing is mentioned in the New Testament, and of course, it is mentioned at length in the Old Testament with regard to the priests and ministers of the Jewish Temple. 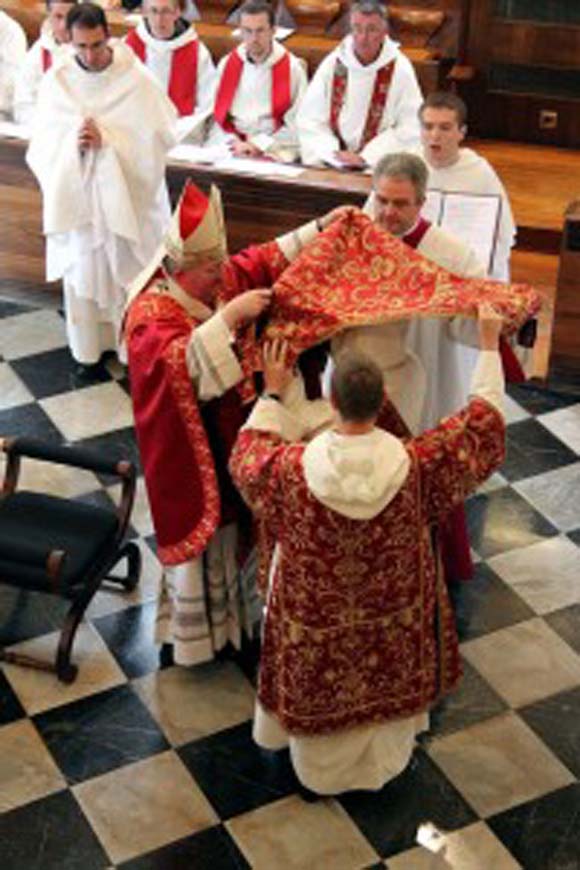 Vestments are part of the liturgy’s communication through symbols. The colour of the vestments which were codified in the 12th century, and made obligatory in 1570, form part of this communication. As the General Instruction of the Roman Missal §307 says: “Variety in the color of the vestments is meant to give effective, outward expression to the specific character of the mysteries of the faith being celebrated and, in the course of the year, to a sense of progress in the Christian life”. As such, the colour of the vestments is not chosen on the whim of the celebrant, but according to the Church’s liturgical calendar. For example, red is worn for feasts of martyrs and apostles as a symbol of their blood shed for Christ.
The colour and beauty of vestments also dignify the celebration of the liturgy, and they underline to the solemnity of the occasion. General Instruction §306 is noteworthy in this regard: “The beauty of a vestment should derive from its material and design rather than from lavish ornamentation. Representations on vestments should consist only of symbols, images, or pictures portraying the sacred. Anything out of keeping with the sacred is to be avoided”. As such, a vestment that is nobly simple (as Vatican II puts it) should have a fine shape and form, be well-tailored, and be made from a precious and beautiful fabric. An interesting consideration of the development of the chasuble (the Mass vestment worn by a priest), and what constitutes a good ‘traditional’ chasuble can be found in this article.
Liturgical vesture also serves to show the diversity of ministries in the liturgy. As General Instruction §297 says: “In the Church, the Body of Christ, not all members have the same function. This diversity of ministries is shown outwardly in worship by the diversity of vestments. These should therefore symbolize the function proper to each ministry”.
Above all, as we have already seen, vestments are a sign of being clothed in Christ, and are a sign of eschatological glory. So, vanity or mere convenience are both attitudes that are antithetical to their symbolic value. As the then Cardinal Ratzinger said: “What is merely private, merely individual, about [the priest] should disappear and make way for Christ … Vestments are a reminder of … this transformation in Christ. [They] are a challenge to the priest to surrender himself to the dynamism of breaking out of the capsule of self and being fashioned anew by Christ and for Christ. They remind those who participate in the Mass of the new way that began with Baptism and continues with the Eucharist, the way that leads to the future world already delineated in our daily lives by the sacraments”.