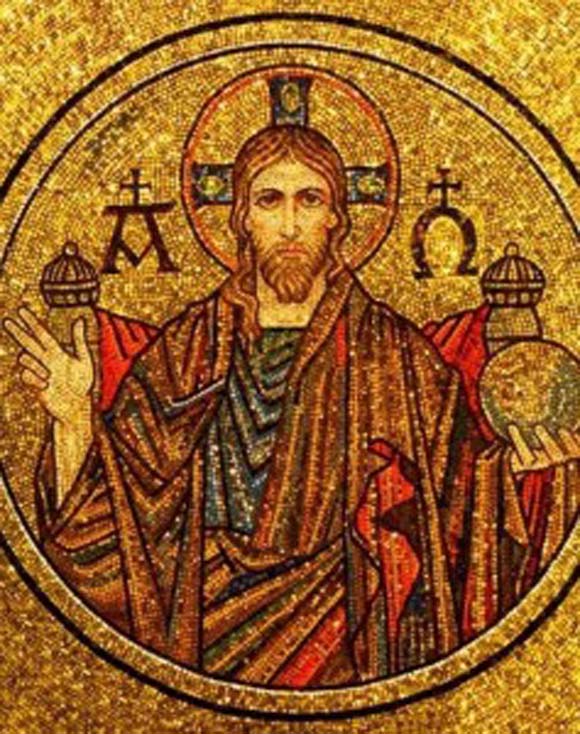 In the Book of Revelation, the last letter of the Greek alphabet, Omega, is symbolic of the end of the universe, understood as the consummation of history and the second, definitive coming of Christ. So, as we come to the end of the (admittedly, Latin) alphabet, it can remind us to consider the ways in which the Mass relates to the end of time, the eschaton.
St Thomas Aquinas teaches us that the sacraments, as signs, have a triple function, pointing to the past, the present, and the future. Pointing back to the mysteries of Christ’s human life, and especially to his Passion, they make present the sanctifying grace, that sharing in the life of God, which Jesus won for us through those mysteries and gives to us now in the sacraments. Past and present are very closely linked, because it is through his Passion – his sharing in human realities even unto death – that Jesus won for us a share of his divine reality, something we receive through outward, physical signs appropriate to our human nature (a unity of soul and body). Present and future, though, are also very tightly bound, for the grace we receive in the sacraments is but a foretaste of that fullness of sharing in God’s life to which we are all called after this earthly life. Indeed it is the pledge of that fulness and the means Jesus freely gives to us that we might obtain it.
Since in the sacraments we are already given a share in the life of God, which is what is promised to us at the consummation of all things when God will be all in all (1 Cor 15:28), it is not untrue to say that the Eschaton, as well as the Cross, becomes present for us at Mass. The Body and Blood of Christ, which demonstrate his humanity and his suffering, and which we receive at Mass, are now glorified in heaven: indeed, the Christian tradition sees the whole celebration of the Divine Liturgy as a participation in the heavenly liturgy. In the Eucharist we ‘taste on earth the gifts of the world to come’. And each of the acclamations after the Consecration includes a reference to past, present and future, for example, ‘Christ has died, Christ is risen, Christ will come again’.
So at Mass time in a sense stops. We are participating in the eternal worship of God, the inner life of the Trinity in which the Son eternally offers himself in love to the Father, bringing together and going beyond every moment in the existence of the universe. Aware, as best we are able, of this quite literally awesome gift of God, as we take part in the Mass, ‘let us,’ in the words of the Byzantine liturgy, ‘who mystically represent the cherubim … lay aside all cares of life, that we may receive the King of all, escorted invisibly by ranks of angels. Alleluia!’