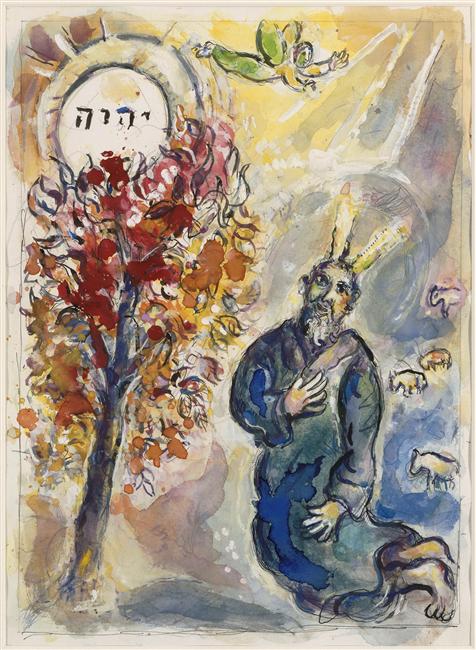 Moses and the Burning Bush by Marc Chagall

“O Adonai and Ruler of the House of Israel, you appeared to Moses in the fire of the burning bush and on Mount Sinai gave him your law.  Come, and with outstretched arm redeem us.”

Yesterday’s antiphon hailed Jesus as “Wisdom”, the eternal Word of God, the “logos” John described in the opening of his Gospel. Today, we rightly acknowledge and hail Jesus as our “Lord” (in Hebrew Adonai). With this second antiphon we progress from creation to the recollection of God manifesting himself by name to Moses and giving his law to Israel as their way of life, the precursor to His fullest manifestation as Our Lord and Saviour Jesus Christ.

The Lord is the fulfilment of all that was promised to Israel and to Moses, and yet in many ways like nothing they could have imagined. A humble Messiah, who “emptied himself, taking the form of a slave, being born in human likeness. And being found in human form, he humbled himself and became obedient to the point of death— even death on a cross”. (Philippians 2:7-9)

This is the Lord who shows us that the Law is so much more than a series of legal strictures, but rather finds its fulfilment in Him (Matthew 5:17). The Law paradoxically becomes stricter and yet so much more beautiful and attractive because it is the gateway to a personal relationship with God. No longer do we just seek to appease God, but with his coming in human form, we can know him and we can strive to become most fully ourselves, by becoming more like Him.

If we ponder this just for a moment we realise how momentous the Incarnation is. God became like us, so that we might become more like Him.

Advent may have rushed by, with Christmas ready to take us by surprise, but it is never too late to heed the Baptist’s cry to repent and turn to the Lord  . . . and if we do; we will find Him there waiting for us with outstretched arm, calling us by our name and loving us much more than we could ever imagine.