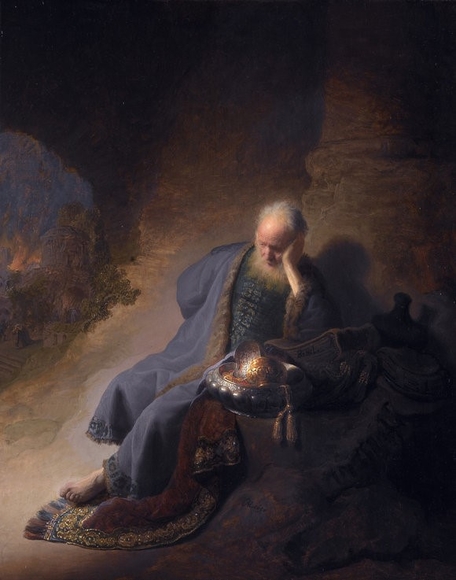 Advent Art: Jeremiah Lamenting the Destruction of Jerusalem, by Rembrandt

By Br John Bernard Church, O.P. | Rembrandt’s depiction of the prophet Jeremiah appears to be one of despair in the face of adversity. Br John Bernard considers whether this really is the case, and how the artist’s understanding of Jeremiah’s interior life might teach us something during Advent.

At the centre of Rembrandt’s moving portrait we have the wizened face of the prophet Jeremiah. His look is one of despair, mourning the destruction of the city behind him. Sitting alone, the lacklustre resignation of his posture seems ill-fitting for one dressed in such resplendent robes, and the array of silverware at his side evidently provides little comfort. Our immediate impression is of a man completely at a loss, whose material comforts and earthly grandeur seem out of place in the midst of such tragedy.

The blurry background of the burning Temple in Jerusalem is almost dreamlike, set against the sharp detail of the prophet’s haggard expression. Perhaps even he, who has spent his life prophesying this moment, can hardly believe it has happened. He said this time would come, that the Babylonians would destroy the Temple: “Take warning, O Jerusalem”. Yet he was met with rejection: “See, their ears are closed, they cannot listen” (Jer 6:8-10). This is a depiction of a prophet lamenting: he shows no satisfaction in his vindication, rather the grieving figure ponders what more he could have done.

“Hear, O earth; I am going to bring disaster on this people, the fruit of their schemes, because they have not given heed to my words” (Jer 6:19).

But I don’t think Rembrandt really does depict a prophet in despair. One mourning, lamenting, grieving certainly, but not despair. To despair is to give up, to lack any hope, and this prophet does not lack hope.

Jeremiah features rarely in the Advent liturgies, where pride of place among the prophets is given to Isaiah. His doleful lamentations are more fittingly read in Lent: describing himself as the “gentle lamb led to the slaughter” (Jer 11:19), his words point us forward to the Passion.

However, this week we are given Jeremiah’s sole messianic prophecy, a rare glimmer of light amidst his warnings of judgment and destruction: at some future, unspecified time, the Lord will raise up a righteous branch for David, “who shall reign as king and deal wisely, and shall execute justice and righteousness in the land” (Jer 23:5).

This is the hope that carries the prophet. He need not despair, for even as the Temple in Jerusalem burns, he knows a time of justice and peace is coming: the Temple that will be raised up on the third day.

In the eyes of Rembrandt, this interior hope of the prophet takes on a physical form. In the middle of the painting, dimly lit and easily missed next to the glimmer of jewels, is a volume of the Torah. A later editor has helpfully scrawled ‘Bibel’ on it in cased we missed the point. Jeremiah leans heavily on the book, bent beneath his weight: while the earthly wealth may grab our attention, the Lord’s covenant with His people contained in the Torah is what holds this painting together. It is the hope that sustains the prophet.

Advent for us too is about a hope that lives within us taking on a physical form. The form of a baby no less, as we wait patiently for our Incarnate Lord.

Jeremiah’s name in Hebrew means ‘The Lord will restore’: while the nearby destruction may give him the appearance of despair, his hope in the Lord remains steadfast. So too may we remain steadfast in hope for the coming of our Saviour, looking to Jeremiah just as the Letter of St James reminds us: “Brethren, take as an example of suffering and patience the prophets, who spoke in the name of the Lord” (James 5:10).

Other posts from the series: