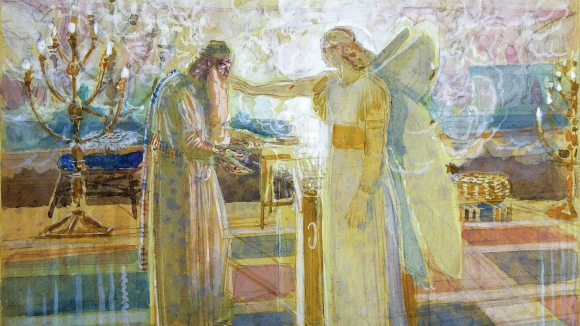 By Br Albert Elias Robertson, O.P. | Br Albert reflects on Gabriel’s appearance to Zechariah in the Temple and what it teaches us about Advent as a season for the purifying of our desires.

On the second floor of the State Russian Museum in St Petersburg, one of Alexander Andreyevich Ivanov’s great masterpieces hangs. You’ve probably seen it on the internet, as it’s one of the most famous representations of the Risen Lord’s appearance to St Mary Magdalene. From what I remember, like a lot of Russian paintings, it has fairly massive dimensions; as broad and tall as the door stop novels of  Tolstoy and Dostoyevsky are long. Ivanov was nicknamed, perhaps rather unkindly, the master of one work because having completed his Noli me tangere painting, it took him twenty years to complete his next picture, his magnum opus, The Appearance of Christ Before the People. This vast canvas measuring five by seven metres can be found in the Tretyakov Gallery in Moscow. But other than these two pictures, there’s not much else by him, an incomplete painting of the Cleansing of the Temple and a few more completed works. What we do have, however, is a vast number of sketches considered to be masterpieces in their own right, of which The Angel Gabriel Appearing to Zechariah is one.

Why have I chosen this image? Part of the reason is that it’s actually oddly difficult to find pictures of it. William Blake painted one version, now in the collections of the Met in New York, and Domenico Ghirlandaio painted the scene in the Cappella Tornabuoni in Santa Maria Novella, the Dominican priory in Florence. But it doesn’t really seem to have caught the imagination of artists in quite the same way as other Advent scenes. Another reason why I’ve chosen it is because so much of the time we can all be a bit like Zechariah.

Sometimes for me, and I think for many of us, one of the greatest sources of despondency is that perfection in the spiritual life, understanding of the faith, even friendship with God, does not come all at once. The gradual process of growing in these things can sometimes strike me as especially frustrating. Why can’t all of these things just come at once? Advent does something to pull us out of this feeling, for it’s a season which expresses desire and longing most perfectly as the words of the expectant prophets become, quite literally in the Divine Office, our song.

Zechariah stands, with Elizabeth and their son John the Baptist, on the cusp of the Old and New Testaments and so they can give a privileged articulation to this sense of longing. John the Baptist would gives a particular voice to this longing by his prophet cry in the wilderness. Elizabeth and Zechariah’s childlessness gives sense to that feeling of sterility and barrenness that waiting can often give. God, like a good doctor, comes when he is most needed, and somehow, to be fully regenerated through God becoming Man in the Virgin’s womb, the world has to become utterly old, come to the limit of its foolish hopes.

But if Zechariah and Elizabeth can express our hopes and longings, Zechariah’s response can also be like ours when God breaks through the fog of hope and expectation to give us the cure we need. Zechariah’s answer to Gabriel must strike us as a strange for anyone as well versed with Israel’s history as he would surely have been. After all, if we look through the pages of the Old Testament, while not an everyday occurrence, it’s not unheard of for God to intervene to give children to the childless. And while we are not confronted by the Angel Gabriel heralding miraculous tidings, we too can quite often be blind to the ways in which God answers our deepest longings and desires.

Over the past few weeks I’ve been reading bits of David Foster Wallace in the evenings. I’ve never quite managed to get to the end of one of his novels, mainly because they seem to dwarf even Russian proportions, but there’s a collection of his shorter prose which I dip in and out of. In his 2005 address to graduates at Kenyon College, a video of which regularly does the rounds on social media, Wallace starts with a story of two fish.

‘There are these two young fish swimming along and they happen to meet an older fish swimming the other way, who nods at them and says “Morning, boys. How’s the water?” And the two young fish swim on for a bit, and then eventually one of them looks over at the other and goes “What the hell is water?”[…]The point of the fish story is merely that the most obvious, important realities are often the ones that are hardest to see and talk about.’

Part of the reason why these realities are so hard to see and talk about is, Wallace, suggests, because we’re hardwired to see everything from our own point of view. We have become something like the Cartesian little robots trapped in our own minds, and perhaps that explains why Zechariah’s response to the angel left him dumb. His response couldn’t see things from anything but his own perspective; his response was rooted in doubt rather than the Blessed Mother’s faith and trust; his response left him unable to see the most obvious and important realities.

Advent then is a time for the purification of our desire, teaching us two things; firstly, that everything will not come at once, and that we must accept a longing and a desire for perfection which will be the work of a lifetime. Secondly, that that our desires cannot become essentially private, clouding our judgement, and turning us in on ourselves. How does Advent do this? It presents us with a longing and a desire that is greater than our own, the desire of a nation, a people, and ultimately of the whole creation for the coming of its Saviour, and so we can not only articulate our desires and longings more accurately when placed in the wider context, but we can also make a more appropriate response when God breaks through the fog of our desire, just as Gabriel came through the fog of incense which Zechariah had just offered. While our answer might not come with an angelic messenger in quite the way that Zechariah’s did, we can hopefully see the most obvious and important realities slightly more clearly than he did.

But back to Ivanov’s unkind nickname. Producing a masterpiece over a long period is no bad thing, because it’s what God does with each one of us over the course our lives. If we can put our longings and desires into a greater story of longing and desire, the story of our salvation, then we can see a little more clearly how God is turning the sketch of our life into a masterpiece.

Click here to see a larger version of the image.

MORE ON: ADVENT
Other posts in the series: