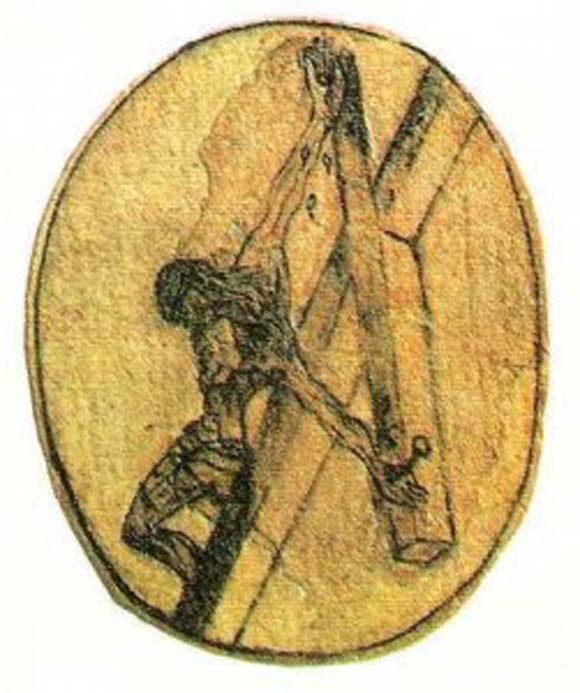 Godzdogz
Home  /  Godzdogz  /  Art of the Redemption 4: Christ of St John of the Cross by Salvador Dali

Art of the Redemption 4: Christ of St John of the Cross by Salvador Dali

Christ of Saint John of the Cross was painted by the Spanish Surrealist painter, Salvador Dali in 1951 at a time when he was emerging from the strong anti-religious atheism of his youth and was re-embracing the Catholic faith. In my view it contains a lot of religious depth, but space will confine me to offer just a few reflections on how it explores and articulates the redemption.
It is partly inspired by a drawing Dali was shown by the 16th century Spanish Carmelite mystic, St John of the Cross (see right), hence Dali’s title. He has taken from the Carmelite the daring idea of portraying Christ viewed from above but he has changed much else. Gone is the tortured form of the body, the big nail(s) and the sweat. I would suggest that what we now have is an expression of the theology of the Cross and of Christ as found in the fourth Gospel. In a way, and despite its title, what we have is the ‘Cross of Christ of (that is ‘in’) St John’. Let me explain. 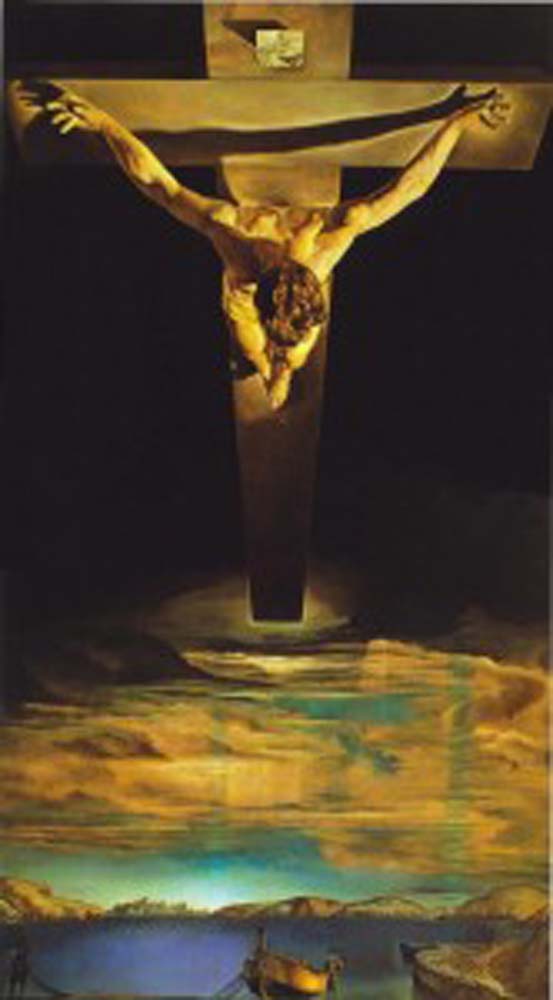 It has been said that the original 16th century version portrays a crucifix from the angle at which a dying person would view it as it is held up to them to venerate. Dali has us view Christ and the cross directly from above and looking down on the array of clouds below and earth below that. It is a heavenly perspective, indeed that of God the Father. Interestingly the Son, Christ, shares the same perspective as the Father: his view follows and continues that of the Father. The fourth gospel stresses that the Son proceeds from the Father and is one with him, seeing and doing whatever the Father directs him to do. In a way the Father also offers the Son to the world, to save it.

The fourth evangelist also stresses that Jesus is the master of his own destiny: he goes to his death because he chooses to. As St Catherine of Siena says he is held to the cross by love and not by nails. This majesty and freedom is brought out well by the lack of nails and the peaceful repose of the figure. John also stresses that the glory of Christ’s victory is already manifest in his actual death. As Jesus had said, ‘when I am raised up from the earth I will draw all people to myself (Jn 12:32). The glorious and serene Christ, situated above the clouds, speaks of a Christ already raised up, ascended to his Father.
While we can look down on the Christ, in a way our gaze is also drawn upwards to the cross. This is achieved because the painting in fact has 2 perspectives. As well as, at the top, looking down from above, at the bottom of the painting we look straight into it, sharing its level so to speak. The bottom scene is very particular. It reminds me of the account of John and James being called while they mend their nets (Mk 1:19-20). In fact, it is set in the contemporary setting of the Spanish fishing village of Port Lligat in which Dali lived. Jesus dies not just for us in a universal way but for every person in their concrete individuality, and not just people back then but here and now. Viewed from here we can look up and, penetrating the clouds with faith, see Christ, at once very clearly physically human but filled with divine glory, immense, embracing everything, and pointing to the Father from whom he has come.
The two perspectives found in the painting meet and produce an overall unity which destroys neither. Christ’s Paschal Mystery unites the divine and human and allows us to be caught up into the divine. The Father offers us his Son. But there is also a challenge. Do we, like John, want to get caught up in the redemptive work of Christ, a mystery known forever in God, but now made known for our salvation? And will we witness to it?

Categories:
Art, Art of the Redemption