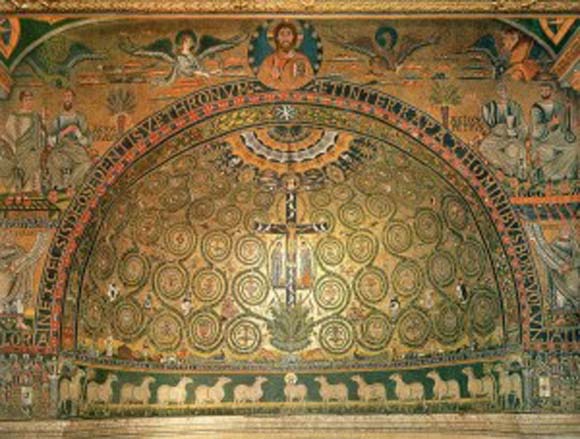 Godzdogz
Home  /  Godzdogz  /  Art of the Redemption 5: The Mosaic of San Clemente

Art of the Redemption 5: The Mosaic of San Clemente

One of the best-known representations of the Cross as the ‘Tree of Life’ is the 12th century mosiac in the Basilica of San Clemente, Rome. Where the Cross penetrates the earth a luxuriant tree bursts forth and sends its branches far and wide, covering the entire expanse of the apse. In doing so it reaches and enfolds all categories of people: teachers and preachers, chaplains and farmers, ladies and hunters, nobles and shepherds. All of human life is brought into contact with the life that flows from the Cross (John 12:32).
And not only human life, for the Cross’s work has a cosmic dimension and so it includes fish, birds and animals, fills the earth and the heavens, and reaches up to touch the ’empyrean’, the point where, in medieval cosmologies, material and immaterial worlds met. There the Father’s hand can be seen, carrying the laurel wreath with which the victor is to be crowned, Christ, our champion, who has been slain. Christ himself is a thin, desiccated, champion, his body squeezed dry, since ‘having loved to the end’ (John 13:1), there is nothing left for him to give.

The cross is decorated with white doves, taken to represent the Apostles who will soon fly to all corners of the world carrying the message of Christ’s victory (Psalm 19:4; Acts 1:8). 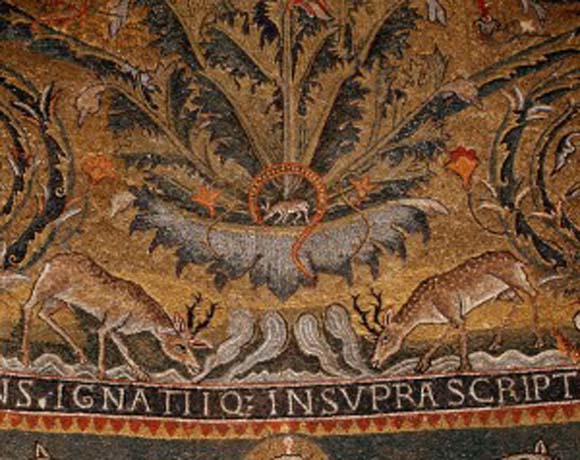 Many other details in the apse repay contemplation, to say nothing of what is on the facade of the apse. A beautiful product of Byzantine-inspired Roman art, the mosaic is a rich meditation on our conviction that the Cross of the Lord is become the Tree of Life for us (Revelation 2:7; 22:19).
Categories:
Art, Art of the Redemption, Easter 2011