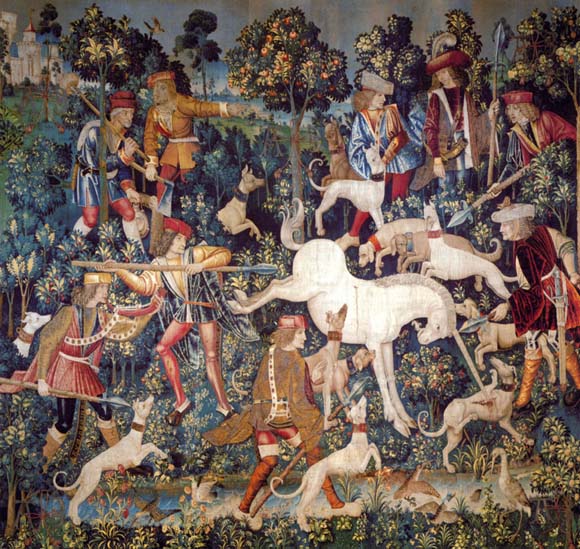 Today unicorns have a rather effeminate, placid reputation. One can see this in children’s story books but also in the Harry Potter series, My Little Pony and a recent episode of Glee. This image is rather far removed from the ancient and medieval account of the fictional one-horned horse. It was seen as the fiercest and swiftest of all land creatures and could not be caught by any hunter. The only way to catch one was to put a virgin girl in its path. The unicorn, seeing the maiden, comes to her and puts its head in her lap and falls asleep. This fierce imagery is also used in the bible. In the Book of Numbers, God is described as having the strength of a Unicorn and the ability to tame the beast. The horns of the Unicorn are often used as a symbol of despair and terror in the Psalms and the Book of Job.
It might come as a surprise that unicorns are mentioned in the Bible at all, and this is very understandable. Many English translations of the Old testament translate the Hebrew word רְאֵם (re’em) as Ox. The Greek Septuagint and Latin Vulgate translated the term as μονόκερως (monokeros) and unicornis respectively. The King James Bible also translates the word as the English “unicorn”(The Douai-Rheims opts for rhinoceros).
Nevertheless the unicorn was seen as a rich symbol of Christ by the medieval Church. One bestiary states that:
The unicorn signifies Christ, who was made incarnate in Mary’s womb, was captured by the Jews, and was put to death. The unicorn’s fierce wildness shows the inability of hell to hold Christ. The single horn represents the unity of God and Christ. The small size of the unicorn is a symbol of Christ’s humility in becoming human.
Just as the unicorn has lost much of its edge in pubic perception, so has the person of Jesus Christ. He was not just a nice man, who told nice stories and told everyone ‘just be nice’. He was the Son of God. He was a true radical and a true revolutionary. He came not just to change peoples’ attitudes and opinions but to change the very nature of the world. Through His death and resurrection Jesus not only restores our nature but elevates to something so much better.