Those parts of the Old Testament canon originally written in Hebrew have a number of words for birds but a significant one among them is ‘nesher’. This bird is described as having magnificent wings and soaring high, of nesting in high rocky outcrops, of having keen eyesight and descending swiftly on its food source. Well, it could be an eagle (see the blog from 20 July) but it could equally be a vulture. In particular it could very well be the Griffon Vulture, also called the Great Vulture, its modern scientific Latin name being Gyps fulvus. It was common in Palestine and indeed is still found all around the Mediterranean. This bird does not correspond to the stereotype we now tend to have of vultures as scruffy, quarrelsome and unintelligent. The Griffon Vulture is a very large bird, being little short of five feet in total length, and the wingspan measuring about eight feet. The adult bird is a yellowish brown colour, augmented by the black quill feathers and the ruff of white down that surrounds the neck. (All photos here are of the Griffon Vulture.)
There are several species of eagle found in Palestine so why argue the case for nesher meaning or including the vulture? Well, because the (Griffon) vulture fulfills all the qualities already ascribed to nesher. And there are further attributes of nesher that eagles do NOT meet that the Griffon vulture (and other vultures) do. Micah 1:16 describes nesher as having a bald head: eagles are feathered on the head but vultures, including the Griffon, are not. It has light down. Nesher is described as feeding on the dead, i.e. carrion (Prov 30:17; Job 39:27-30): again only vultures, and not eagles, do this. Nesher is described as being long-lived, prompting the suggestion that it renews its youth (Ps 103:5): eagles can be long lived but the Griffon exceeds them all – living in the wild typically for at least 40-50 years and in excess of 100 in captivity. The Griffon is known to be intelligent, to care for its young, assisting them in early flight, thus ‘bearing them on their wings’ (cf Ex 19:4; Rev 12:14). 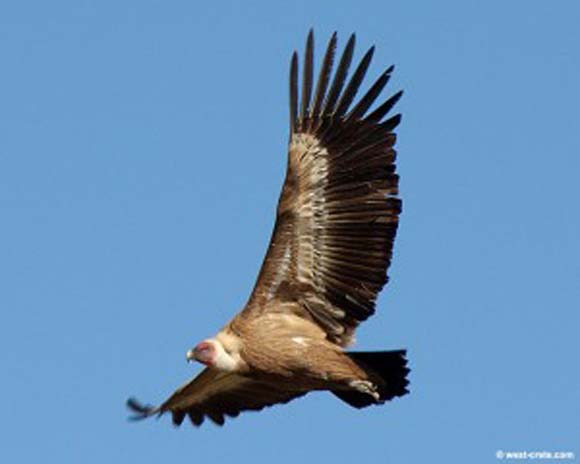 Although vultures are not highly esteemed nowadays (in the west) they had high prestige in the ancient world. It was a symbol of a deity among both the Egyptians and Assyrians, often linked to war. This is partly because they seemed to follow armies and to descend with lightning speed in battles. Indeed, the speed with which they found the dead and their capacity for being present when battles occurred gained them a reputation for foresight, and even a share in divine foresight and insight – and more widely divine knowledge. (All this means that the vulture could lie behind the bird in Ezek 1:10 and, though in a Greek text, in the Book of Revelation 4:7.)
It is all of this that Jesus seems to refer to and draw on when he cites the saying ‘Wherever the corpse is, there the vultures will gather (Matt 18:24). The context is the sudden but very public coming of God at the end of time and in judgment. Vultures, previously tiny specks high in the sky, swoop down suddenly and with devastating effect – and seemingly with divine knowledge. They gather in very obvious numbers. Eagles do not gather like this, but vultures do, and among the vultures, the Griffons then feed in a social manner, not disturbing each other. Jesus clearly had the vulture, not the eagle in mind. This is almost certainly true of the similar phrase in Lk 17:37: there is a gathering of birds though Luke uses ‘soma’ which can mean a living or dead body. The context suggests the same kind of meaning as above: the disciples can be sure that God will come, and with speed and power and thus they should be vigilant and indeed stay awake and spiritually alive. A vulture also fits better in the context of Rev 8:13 than an eagle, ‘seeing’ destruction and presumably also death. 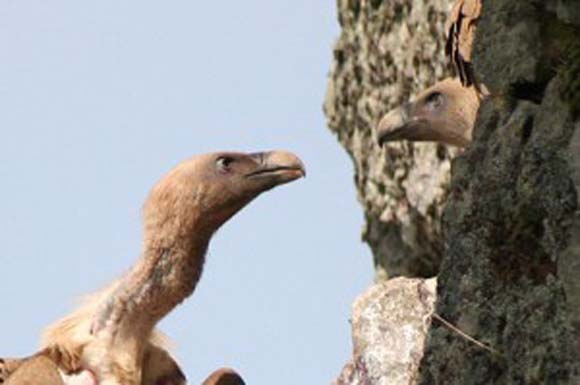 If nesher represent one species of bird (as we understand species) then the Griffon vulture is the only candidate. It is also the vulture that Jesus has in mind. Why then is the eagle and not the (griffon) vulture seen as the great religious bird and symbol of divinity in the Christian tradition? The problems begin with the Septuagint translation of the Hebrew texts into Greek from around 200 BC and later. They sometimes use aetos for nesher. Sometimes they use ‘gups’ but they also use this for other Hebrew bird words, and of seemingly smaller birds. They were attempting some sort of biological classification different to what was in the Hebrew words before them and I wonder how well they knew the Palestinian fauna. The ancient Greeks in general did not always distinguish vultures and eagles, but many translators since then have considered that aetos ought in general to be translated as eagle. (Some note that it means vulture if the reference is to a bird feeding on carrion – but ornithological expertise is often lacking.) Only aetos is used in the New Testament. In Roman and Latin culture the eagle, not the vulture, was considered the bird of prowess and a military symbol of power and this view has spread to modern cultures. In translations, eagle has thus dominated over vulture (often to its complete exclusion), sometimes creating exegetical problems. All seem to have lost sight of the magnificent Griffon Vulture. Perhaps the Hebrews intended to include eagles in some of their references to nesher. But the Griffon Vulture, which they clearly knew about, has to all intents and purposes been ‘lost in translation’. To make matters worse, it is now an endangered species in Israel.