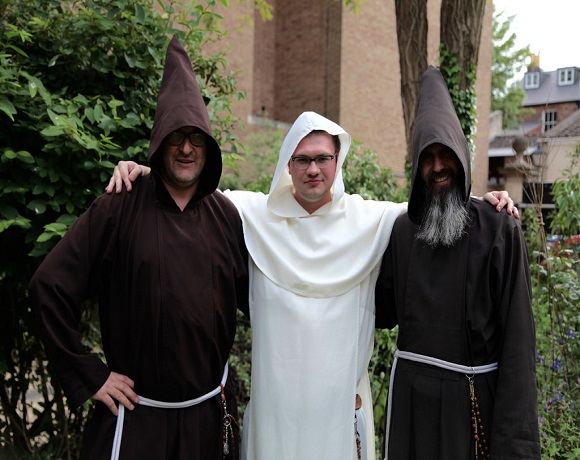 In our Consecrated Life series we have been looking at numerous aspects of this way of life through a Dominican lens. It is always helpful, however, to have another perspective and in his excellent book, Radical Discipleship – Consecrated Life and the Call to Holiness, Francis Cardinal Arinze distils the fruits of decades of experience as Bishop, Archbishop and Cardinal, in which time he has visited and encountered countless religious and their communities from a multitude of congregations and orders. Drawing upon this experience he seeks to give us something of what is fundamental to all modes of the life and thus to examine the very heart of what it means to live the consecrated life.
The Cardinal offers us a reflection on the consecrated life with the ‘hope and prayer that this life might be better understood, loved, lived and promoted’ and one of the great aids he offers in this task is a wide range of sources reflecting the mission and the living out of the consecrated life. These range from Pope Francis, telling us that those in the consecrated life are to ‘awaken the world’ by living a ‘prophetic life’ in a ‘most effective way to imitate the Lord’, to the Church Fathers with, for example, St Augustine telling us how ‘since you do not yet see God, you merit the vision of God by loving your neighbour.’
The early part of the book is devoted to examining the biblical roots of the consecrated life and its existence in the early Church. The consecrated life, we are told, is a profound response to Jesus’s call for us all to be perfect as our heavenly Father is perfect (cf Mt 5:48). While Vatican II made clear that all are called to holiness, ‘the holiness of the Church is fostered in a special way by the observance of the counsels proposed in the Gospel by our Lord to His disciples’ (Lumen Gentium, 42), and it is these counsels which give the consecrated life its most distinctive characteristic. 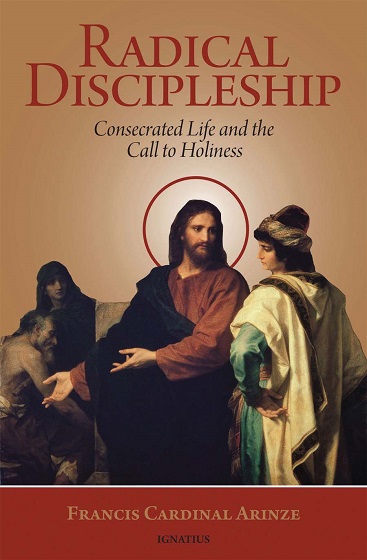 After some interesting statistical analysis of numbers of religious in the consecrated life and official Church pronouncements recognising the value of the prophetic witness of the life, Cardinal Arinze turns to a discussion of the evangelical counsels and their purpose. This was, for me, the most beautiful and stimulating section of the book, at once consoling, insightful, and challenging.
Religious refuse to give their lives to the world, not because the world is bad, but because there is a greater prize to be sought and the things of the world are at best ‘means’ not ‘ends’. The evangelical counsels of chastity, poverty and obedience help those in the consecrated life to root out the lusts for pleasure, possessions and power which can distort our desires and actions and thus the Counsels help us to be ‘freer in seeking God’.
In this, the longest section of the book, the Cardinal explains how the sacrifice of the goods of marriage, possessions and doing one’s own will are at the heart of following Jesus more radically and are thus at the very heart of the consecrated life.
First by chastity, which all the faithful are called to practise in the mode proper to their state in life, religious are called not to love less, but more. Quoting Pope Paul VI, he tells us that ‘[t]he joyful living of perfect chastity [is] a witness to the power of God’s love manifested in the weakness of the human condition’ and the vowed state is an image of the mystical union between Christ and his Bride, the Church.
Those vowed to chastity are not to consider themselves as barren, but rather as spiritual parents. We are told that ‘through committed love for other people, consecrated people encourage and nourish the divine life in others and help them grow in that life’ and the Cardinal holds out Mother Teresa as a paradigm of one who had an intense love of God which properly overflowed into love of neighbour, such that many came to consider her as a mother or even ‘the smile of God’.
Chastity also witnesses positively against certain currents of modern thought which tell us that self-control is impossible and at that we should just seek to manage the consequences through abortion and contraception; it shows that a life of continence is possible and helps to forms part of a culture which strengthens marriage and the family.
Through the vow of poverty, those in consecrated life imitate Jesus and ‘attest that God is the true wealth of the human heart’. In so doing ‘they challenge the idolatry of money’ and help provide a positive witness to the good of charity and solidarity with the poor.
Those living the vow of poverty help to counter a culture that often derives identity and meaning from material possessions and social standing, showing that sacrifice is to be more highly prized than accumulation and consumption. This vow is a challenge ‘to find [an] identity in a personal relationship with Jesus Christ and in spiritual realities that go beyond material possessions’.
Another aspect of the vow of poverty is how it gives credibility to the preaching of the Gospel. This goes right to the root of St Dominic’s motivations in founding our Order, for ‘when the Gospel is lived without compromise it casts light on the heart of individuals’ and gives extra weight to our words when we preach for the poor and the powerless in a way that is not always the case for wealthy rock stars and politicians, even ‘when the words they employ are correct’.
Finally, there is the vow of obedience ‘by which consecrated persons sacrifice their own wills in order to unite themselves with greater steadiness and security to the saving will of God’, seeking to follow Christ who gave his life as a ransom for many.
One of the neglected aspects of the vow of obedience that is well brought out by Cardinal Arinze is how, at its heart, the vow is ‘built on faith, love, and trust in Divine Providence’. We must trust in God in order to trust the instruction of our superiors, even when it goes against our own personal desires or opinions. At the same time superiors of communities must carry out their office in a spirit of humility and subservience to the will of God, with authority viewed as an act of service. Thus, again in a citation of Pope Paul VI, we are told that ‘[a]uthority and obedience are exercised in the service of the common good as two complementary aspects of the same participation in Christ’s offering’.
One of the great strengths of this section is that not only does it describe the beauty of the vows when lived well, but it contains many useful pointers for how one can better live them, along with cautions against the way we can be tempted to live their letter, but not their spirit, in a technocratic manner. If there is no sense of sacrifice, if there is no occasional ache as we seek to follow Christ, we need to re-examine our commitment to the vows.

There are other excellent sections in the book on the importance and value of community life in living out the consecrated life; on the prophetic dimension of the life and how it preaches both to the rest of the Church and to society at large; as well as a valuable consideration of the challenges of consecrated life and the responsibilities of the rest of the Church to those living in this state. However, one of the difficulties of reviewing this book is that the Cardinal does not waste any words in it and so a précis of his thoughts inevitably leaves out much of value.
There is, though, one other section which I wish to reflect upon further, in which he draws out an important element of consecrated life, often overlooked, namely, the importance of having religious brothers and sisters who are not priests. These help to witness to the reality of ‘the religious state’ as the ‘profession of the evangelical counsels being complete in itself’. The consecrated life has its own value independent of the sacred ministry. Perhaps more so than those religious brothers who are also priests, these brothers and sisters witness to the radical discipleship of consecrated life, showing that following Christ is its own reward irrespective of any status or rank.
In a society that often blandly mistakes being equal in dignity for sameness, these men and women eschew the honours that some may associate with certain ranks or professions. It is their relationship with Christ which is paramount, not how they are viewed by others. They may often be misunderstood, they may be challenged as to why they did not just marry and do what they do as their job. However, they understand how their lack of status can help bring them closer to the poor and to those who have no standing in society; they understand the value of consecrated life, in and of itself, and accordingly witness to all those who are on the path to priesthood or who are priests already. Religious brothers and sisters are a response and realisation of Christ’s appeal to us to become servants and slaves to all, in a radical imitation of Christ himself (cf Mk 10:43-45). 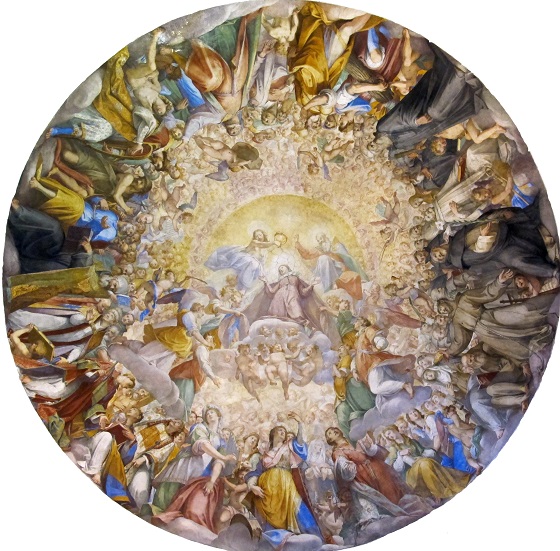 Whilst the book is only a little over a hundred pages, there is much richness within it, and it warrants a wide readership. For me as a fledgling religious, with just under three years’ experience of consecrated life, there was cause for regular reflection on my own motivations and commitments; it he has helped me better articulate (at least in my own head!) why one should live this way; and, more importantly, provoked and challenged me to live the life more fully.
It is also a book which would make an ideal present for a perplexed parent or friend struggling to understand the value of the consecrated life. For, as Cardinal Arinze points out, the consecrated life is not a rejection of the life of the layperson, who is called witness to Christ in the secular world, participating in it and its goods, but always imbued with the Spirit of Christ. Instead, it is a profound embracing of the very highest good at the expense of other goods, demonstrating that those goods which others might consider indispensable for a happy life are in fact subordinate to radical discipleship of Christ, and that the love of God is to be prioritised above all earthly considerations. What is more, such a life, shockingly to some, can be a life of profound joy, and such joy is perhaps the most profound witness of all.
MORE ON: BOOK & FILM REVIEWS, VOCATIONS, VOWS
Categories:
Books, Reviews