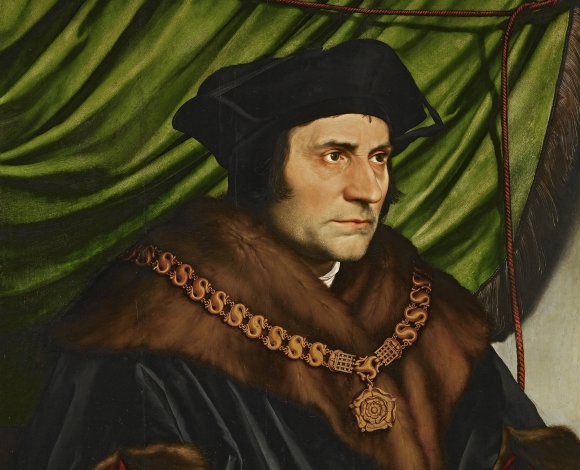 But for Wales, Richard?

By Br Thomas Thérèse Mannion OP | ‘The Gospel asks us to deny ourselves, to cast off selfish ambition and greed. What goal are you working towards? What treasure are you gathering, that which lasts for heaven or that which fades?’ Br Thomas reflects on today’s gospel.

Jesus said to his disciples: ‘The Son of Man is destined to suffer grievously, to be rejected by the elders and chief priests and scribes and to be put to death, and to be raised up on the third day.’ Then to all he said: ‘If anyone wants to be a follower of mine, let him renounce himself and take up his cross every day and follow me. For anyone who wants to save his life will lose it; but anyone who loses his life for my sake, that man will save it. What gain, then, is it for a man to have won the whole world and to have lost or ruined his very self?’

‘But for Wales, Richard?’

This scene from the famous film about St. Thomas More’s life, ‘A Man for All Seasons’ sees Richard Rich a former friend of Sir Thomas betray him for advancement.

‘That is a fine chain of office you are wearing Richard, may I see it?’
‘Master Rich has been made Attorney General for Wales’

‘Ahh but Richard it profits a man nothing to gain the whole world if he should loose his soul… but for Wales Richard?’

There are plenty of things less grand than Wales which we trade our soul for, mostly little compromises we make with evil convincing ourselves we are entitled to a particular good.

There is another scene earlier in the film where Richard is begging Sir Thomas for advancement at court. What is wrong with wanting to be a good statesman, just as St. Thomas More was?

’Be a Teacher Richard’, says St. Thomas. ‘But who will know my name?’

Richard refuses to crucify his ego. He is not satisfied with being a servant he wants to be important. He desires honour and power, rather than service and sanctity.

I want to contrast this portrayal of Richard Rich with a student I met on holiday.

This student said they had thought about changing their degree, they could be a surgeon. ‘I would have a great job, I would could provide more for a wife and children, I would be more desirable and attractive, I would be saving people’s lives’. None of these things are bad desires to have. It is not evil in and of itself to want to be successful, but what success are you aiming for? The letters after your name mean nothing if when you are judged by Christ you do not have the letters ‘St.’ at the front of your name. A happy, healthy family is not a bad desire to have, to provide for them is not a bad desire to have but is this so you can look good and feel accomplished, is it about loving others or just being loved? Is your service more about you or God and neighbour?

This student, who I find to be a very holy man, went on to explain how he thought to change his degree would be bad for his soul. The pride he would feel from being a saviour figure who people look up to, the desire for men to envy him and women to lust for him, he would be wealthy and honoured.

This student saw his motivations with remarkable honesty and clarity. When I asked what he chose, he said ‘I chose God, I chose to live. It would take me away from God, away from loving others, I would be serving myself at the same time as convincing myself I’m such a good person, after all how could saving the lives of others harm my soul?’. I think this man has an extraordinary holiness about him and its because he has taken today’s Gospel to heart.

The Gospel asks us to deny ourselves, to cast off selfish ambition and greed.

What goal are you working towards? What treasure are you gathering, that which lasts for heaven or that which fades? What false treasures do we strive for? Looking clever, being desirable, the pleasure we feel from passive aggressive sarcastic comments, the feeling of importance or power from judging others?

Jesus underwent great suffering, rejection by the elders and chief priests he was crucified and raised on the third day. So what? How is this applied to you concretely? Discipleship: living a Christ-like life, anticipating the needs of others rather than anticipating ones own desires. This is a non-negotiable aspect to being a Christian. Your life is not about you or what you want.

When Jesus says take up your cross and follow me, the emphasis is on the active, the cross may or may not be of our own making but the embracing of that cross is a choice we can make. It is hard but with love it can be embraced. To take up ones cross is to take up the instruments by which you crucify yourself through loving discipleship, through doing your duty, your responsibilities, through service, anything else is a distraction and a waste of your time.