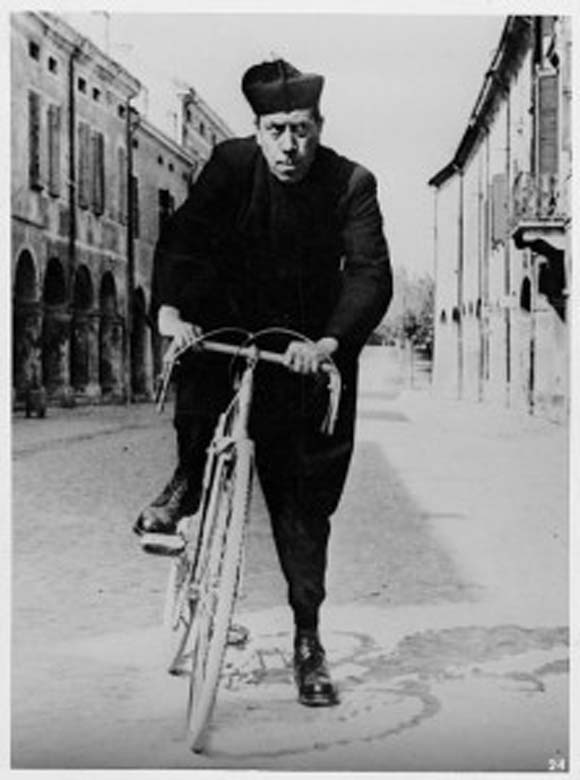 In 1946 the journalist and humorist Giovanni Guareschi published a short story in the satirical magazine Candido. This tale (the first of many) of a small post-war Italian village and its hotheaded parish priest, Don Camillo Tarocci, is a charming and very human snapshot of the struggles between the Communist Party and the Church within Italy and it is no surprise that the works have resulted in numerous adaptations to TV, radio and film. Guareschi’s writings however are much more than a clever piece of satire.

Don Camillo is a dedicated and faithful priest. He has a fiery temper and at times equally fiery fists! He is is constantly at odds with the communist mayor, Peppone, and their clashes are the driving force of the stories. Both were partisan fighters during the war and both want the best for the people of Ponteratto, though for different reasons. Nevertheless neither man is a clear-cut caricature: although he publicly opposes the Church as a Party duty, Peppone takes his gang to the church and baptizes his children there, which makes him part of Don Camillo’s flock. If Peppone can be a Communist and a Catholic at the same time, Don Camillo, on the other side, gets labeled by local rich landowners and traditionalists as a “Bolshevik priest” because he is not afraid to decry the avarice of rich people.

The most interesting relationship Don Camillo has is with the Crucifix in the village church. Through the figure on the crucifix, Don Camillo often hears the voice of Our Lord and unsurprisingly this is the voice of reason! The figure of Christ often has far greater understanding than Don Camillo for the troubles of the people, and has to constantly but gently reprimand the priest for his impatience.

The character of Don Camillo has much to offer Christians, particularly priests. All Christians have to live in the real world. We have to deal with people who will not agree with us or who even oppose us. We have to work with people not just for a quiet life but so that they might hear the Gospel too. Whilst we should never give up our principles or beliefs, we should take care not to demonise and not to be aggressive in our zeal.

Don Camillo himself reminds us that priests are human and will have flaws but they have been entrusted with the care of souls and the only way this possible is by having a deep relationship with the crucified Christ. Not everyone will have a talking crucifix but Our Lord does speak to us in many ways: we just have to be prepared to listen.