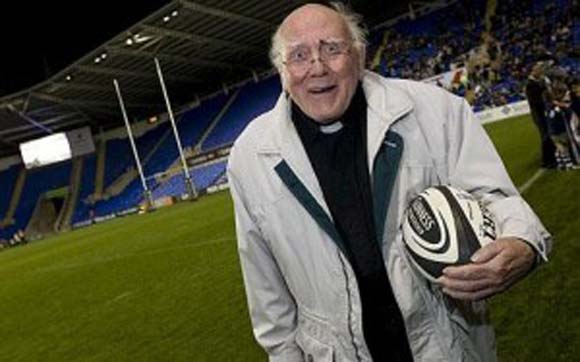 The Right Reverend Monsignor Canon ‘Tom’ Gavin died on Christmas day after a short illness. At the time of his death he was the third longest serving priest in the Archdiocese of Birmingham. He is the only ordained Catholic priest to have played international rugby. He was born in Coventry on the 28th of March 1922. From an early age he desired to be a priest and so he embarked on his secondary education at Cotton College, situated in North Staffordshire, a Catholic boarding school in the Archdiocese of Birmingham. Here his passion for classics and for sport, especially rugby and cricket, began to develop.

In 1940 he began his studies for the priesthood at Oscott. During his time in Birmingham he began to play for Moseley RFC as a solid inside centre. He was ordained to the priesthood by Bishop Humphrey Bright on 21 July 1946. He was then sent to read Classics at Christ’s College, Cambridge. During these years he played rugby for the University and the mighty London Irish. In 1949 he was called up to the Irish national side, a team that had won the Grand Slam in the previous season and was the greatest Irish Rugby team until the Brian O’Driscoll led team of the early 21st century. His selection resulted in a debate among many bishops in England and Ireland over whether or not a Catholic priest should play international rugby. Nevertheless Archbishop Joseph Masterson approved and Father Tom received his first cap against France in Paris. The Irish lost but went on to retain the Championship and the Triple Crown, with Gavin playing in the 14-5 victory over England. So ended the international career of this “Toby-jug” priest. 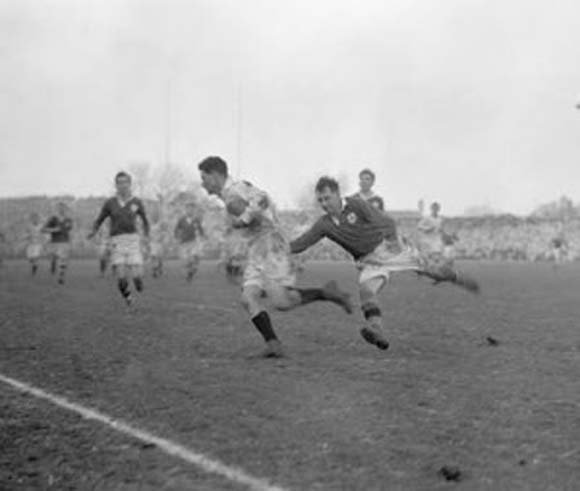 Father Tom was then appointed Prefect of Studies at his Alma Mater, Cotton College, in 1950. He became headmaster in 1967, a position he held with distinction until he retired from teaching in 1978. Monsignor Tom made great strides in developing the curriculum, the school building, and the provision for sport. He used his abilities as a former rugby international to inspire the boys to develop their skills on the rugby pitch, and he had a high quality running track installed to enhance their opportunities for athletics. Nevertheless his priority was to school them in the Faith. Three of his former pupils Terence Brain, Kieran Conry and David McGeough are bishops (in Salford, Arundel and Brighton, and Birmingham respectively).

In 1978 he was appointed parish priest of St Thomas More, Coventry where he served the parish and worked tirelessly for 26 years. He organised the Mass for the Pope’s visit to Coventry in 1982 and retired in 2004. The same determination and dedication he showed on the rugby pitch was shown throughout his priestly ministry. As a priest, he was completely loyal and devoted to the service of God and the Church. He was also loyal to the Exiles, despite playing for Nuneaton and Coventry in his later years, and received a standing ovation at the Madejski Stadium when he made an appearance at the pivotal game against Sale last season.

When asked what his greatest memory was, Monsignor Tom did not say playing in the Varsity Match, winning the Triple Crown, meeting John Paul II, or being appointed headmaster of Cotton. He always said it was the day he was ordained. His priesthood was central to his life and defined him whether he was teaching, preaching or tackling. A fellow priest in Coventry, Father Jonathan Veasey, said:

“Mgr Tom Gavin was truly an outstanding priest. A man of prayer, devoted to his priestly duties and wanting the people in his care to be people of faith and good citizens. He had an amazing capacity to reach out to all sorts of people through the gifts of his humanity and faith. His dedicated service to the Church has been a source of inspiration for so many priests and lay people.”

The Right Reverend Monsignor Canon Thomas Gavin (1922-2008)
Eternal rest grant unto him O Lord, and let perpetual light shine upon him.
May his soul and all the souls of the faithful departed,
through the mercy of God,
rest in peace,
Amen.