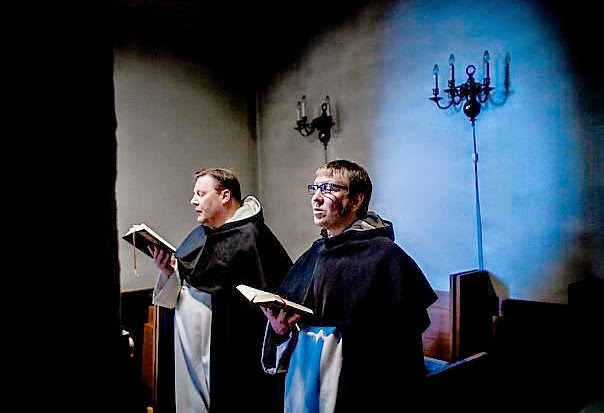 Here is the text of the sermon I preached on Christ the King (Sunday 23rd November) at Corpus Christi College, Cambridge.

—
Readings: Psalm 93; 1 Maccabees 2:15-29; Mattthew 28:16-end.
One Halloween night, when I was an undergraduate here, some young Dominican friars came down from Blackfriars on the hill to an event at Fisher House [the Catholic Chaplaincy for Cambridge University]. Outside, they bumped into some revellers who were fairly drunk – they had entered into the true spirit of Halloween, you could say. Seeing the friars, one young lady tottered over and said, ‘Nice costume, mate!’
But as she grabbed the friar’s black cloak, she staggered back in amazement: ‘O my God, you’re for real!’
Well, in those days I was getting to know the Dominicans myself and began to understand that they were indeed real people with a real way of life that I found really attractive. As students we weren’t quite sure if our privileged way of life was really real. Didn’t we talk about the ‘Cambridge bubble’, and say things like, ‘When I enter the real world…’?
I’ve raised this question of reality, because our first response to the lessons we’ve just heard is that they don’t seem real enough to us. The bloody incident of Mattathias and the Maccabees belongs to a harsh situation far removed from our more civilized culture. And there are the disciples on top of a mountain in the Holy Land worshipping a man raised from the dead – again, this seems exotic, weird, nothing to do with me, thank you very much.
And what about this idea of Christ the King? We have Her Majesty the Queen: why do we need Christ the King? Are they not in competition? Perhaps we should retreat into the preaching cliché and say, ‘Okay, Christ is not really a king, but he is a king in a very real sense…’!
The Christian tradition is marked by a deep ambivalence about political power. On the one hand, Christians say YES to the state. Christians should love their country and be obedient to the ruling powers. As St Paul says: ‘Let every person be subject to the governing authorities. For there is no authority except from God, and those that exist have been instituted by God.’ So we should be good citizens, contribute to social stability, lest the Gospel be discredited, for our aim is to usher in the peaceful reign of God on earth. 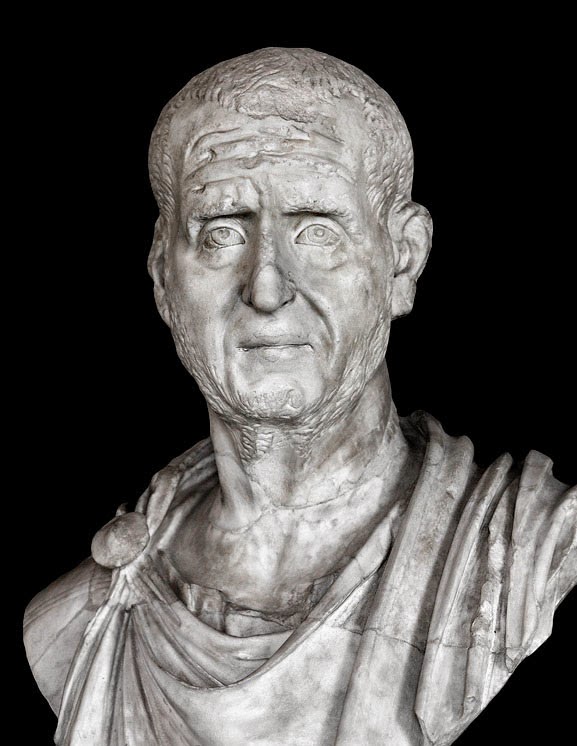 The problem was, the Roman empire increasingly demanded to receive more than it was due. So, Christians also had to say NO to the state. In particular, the empire started claiming an absolute authority over religious matters. The emperors became the supreme priests, and were even being worshipped as gods in their own lifetime. Christians knew they ought to pray for the emperor, but never to the emperor. Sadly, emperors such as Decius and Valerian demanded this undue honour; the Christians refused, and many thousands of them perished. In the 20th century, this feast of Christ the King was established by the Pope precisely to oppose the totalitarian regimes that were taking over Europe. And let us not forget that widespread and cruel persecution of Christians continues today.

This Christian NO to the state is the best way to understand the Maccabees’ revolt. The rulers demanded idolatry and sin, and the Maccabean Jews refused. They refused to join the king’s sycophants, his flatterers and floozies. (When I spent a term engrossed at the Union, hosting speaker events instead of doing my History degree, my dissertation supervisor warned me to keep away from the ‘sirens and floozies of the Union’!) Well, Mattathias and his followers, ‘who were seeking righteousness and justice’, stayed clear of the king’s court because they knew they had to remain faithful to God’s covenant.

And yet they didn’t get it quite right. They believed they had to establish a kind of military theocracy. Later, under the Romans, many harboured utopian expectations of a new ‘King of the Jews’ to liberate them from the colonial oppression. They wanted a political and religious Messiah who would establish God’s kingdom on earth, by force if necessary.
Enter Jesus. The crowds welcome him to Jerusalem like a great king, albeit riding on a mere donkey. They want him to overthrow the Romans. But Christ is not going to be a real King of the Jews – at least not in that sense.
A real king would not stand powerless before Pilate, the Roman governor. Jesus tells Pilate: ‘If my kingship were of this world, my servants would fight… but my kingship is not from the world.’ And so the Roman soldiers make a farce of it, dressing Jesus up in a purple robe, a mock symbol of royalty, and crowning him not with laurels but with thorns.
Thus Pilate shows him to the crowds, saying: ‘Behold your king!’ And the fickle crowds shout back, ‘We have no king but Caesar.’ They condemn themselves out of their own mouths, rejecting God’s kingship and enslaving themselves to merely earthly authority with Caesar as their new idol. 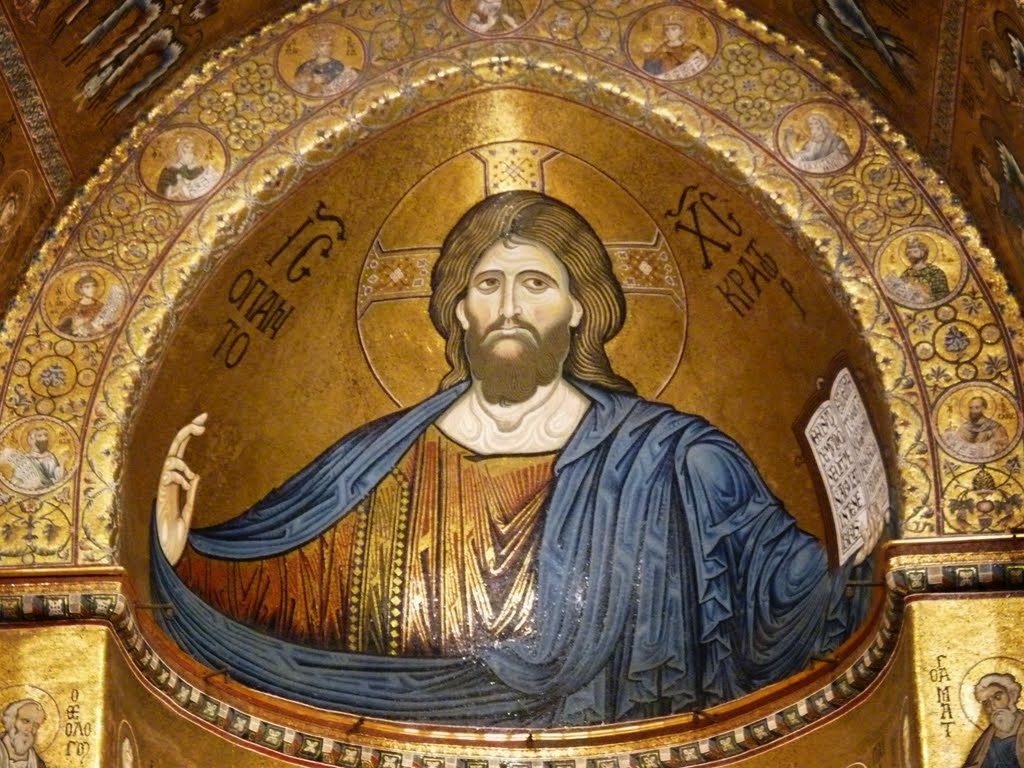 Christ Pantocrator, Cathedral of Monreale, Sicily
I suggested earlier that the kingship of Christ is not in competition with earthly authorities. Caesar must be given his due, but then something else is due to God. The Kingdom of God means righteousness, peace, and joy, none of which can be established by purely political means. Jesus came to bring about that inner liberation from sin, and liberation even from final death. Instead of force, God’s weapons are subtler and much more powerful: humility, patience in suffering, and holding fast to truth and goodness even when people around you hate you for it.
That is why the Gospels present the Cross, not as the defeat of Christ the King, but as his glorification and enthronement. There’s an ancient hymn that refers to the Cross as a ‘trophy’, which is clever because the trophy or trophaeum in the Roman period was the spoils of war that you displayed in a public place after your victory – and they were hung on trees! The Cross, then, is the trophy of God’s victory over all the evils in the world, even death itself.
So let’s look again at Christ the King hanging on the Cross and ask ourselves what we really see there. Christ is utterly humiliated and bleeding to death. Above his head, Pilate’s placard mocks him as the so-called ‘King of the Jews’. And in the final moment, when Jesus breathes his last, the Roman centurion standing guard looks up in amazement and says, ‘Truly this man was the Son of God.’ This centurion is no Jew, he has no expectations of the Messiah, he doesn’t know about the Resurrection to come, and perhaps he doesn’t care about religion and politics and freedom and all that. All he knows is that he sees the King of the Universe hanging dead on the tree, and he says: ‘O my God, you’re for real.’ 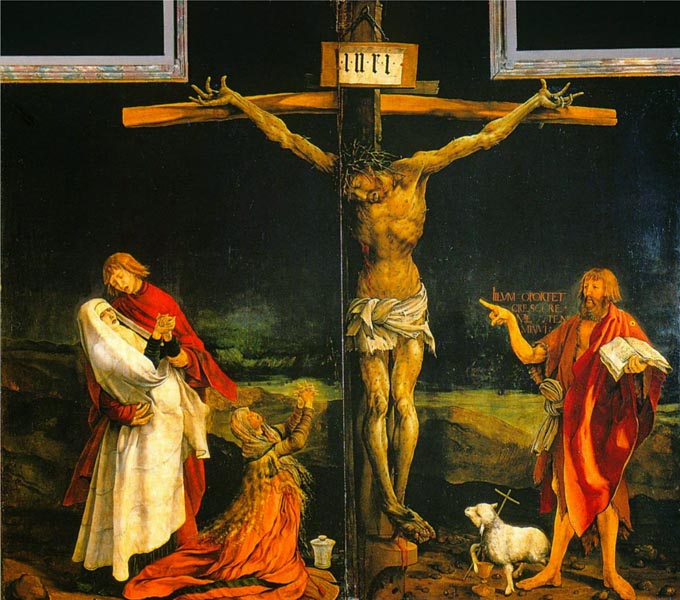 Grünewald, Isenheim altarpiece
—–
We would really value three minutes of your time to complete a quick survey.
Your response will be anonymous but will help us know more about our readers and what you think of Godzdogz – and so help us to provide you with posts that you will find helpful or interesting.
To take the quick survey, click here:
https://www.surveymonkey.com/s/godzdogz
Many thanks from all the Dominican brothers at Godzdogz!
Categories:
Feasts, Jesus Christ