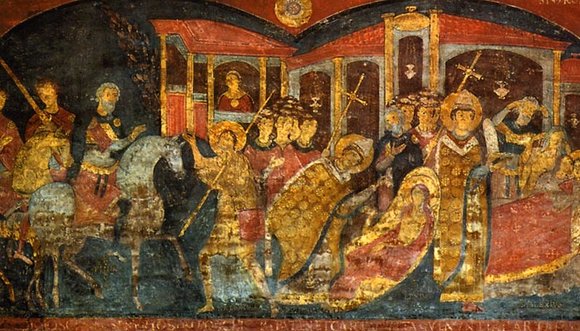 Christianity and Tragedy: the case of St Alexius

By Br Bede Mullens O.P. | What are we to make of St Alexius, a man who abandoned loving parents without notice and hid his identity when he met them again? Is this Gospel inhumanity?

“Blessed are they who mourn, for they shall be comforted.”

Under the Dominican church of San Clemente in Rome, lies a fourth century basilica. Its decoration in parts is marvellously preserved, and one can see there a fresco sequence depicting the life of one St Alexius, a fourth century ascetic. Alexius has long been venerated in the East; in the West, however, and despite his being a Roman, he only seemed to find any devotion from the 10th century. He was born into a well-to-do Christian family, and was destined for a prominent future. When he came of age, with the prospect of an arranged marriage in view, he fled to Syria, leaving not a word to his parents, and disguised himself there as a beggar. Over years, he subjected his body to such austerities that he became quite emaciated. Yet by and by, a strange sequence of events led him back to Rome, where he was accepted again into the house of his parents: it was not that they had recognised their son; they thought this wizened figure a charity case. And he refused to reveal his true identity to them. Rather, he kept up his asceticism in a little cubby-hole of the house. Only when once he died, did his parents find the body with a note: this was your son. That, of course, is not the end of the story: the last part of the fresco shows St Alexius being carried away by an angel to his eternal reward.

On a first reading, I imagine we are inclined to consider this a poignant but finally happy tale. There can be no doubting that Alexius fulfils in exemplary fashion to the Lord’s most difficult demands:

To another he said, “Follow me.” But he said, “Lord, let me first go and bury my father.” He said to him, “Leave the dead to bury their own dead…” Another said, “I will follow you Lord; but let me first say farewell to those at my home.” Jesus said to him, “No one who puts his hand to the plough and looks back is fit for the kingdom of God.” (Luke 9.59-62)

Truly, we can say that Alexius hated father and mother for Christ’s sake, and was rewarded for it not only in the hereafter, but in a fashion while still on earth by being returned to his parents. At the same time, we surely must feel some unease at the way he conducted himself. For any other motive, we would certainly call it heartless (if not wicked) to abandon one’s loving parents without a word; and strange to fall in with them again and give no hint of it, until it was too late.

In fact, Alexius’ story strikes me a little like the plot of certain Greek tragedies, in which these failures and successes of recognition are often an important driving force (Aeschylus’ Choephoroi or Euripides’ Ion or Iphigeneia at Aulis are good examples). Think of the emotional turmoil the ‘end’ of the story may well have begun for Alexius’ parents: the resentment or confusion of past abandonment and his unwillingness even to show himself to them when he came back. I would suggest that it this tale is also tragic in a more than literary sense. While we often use ‘tragedy’ to refer to any catastrophe, historically artists and philosophers have struggled to distil a more refined and richer definition of the tragic. One important such definition goes as follows: a tragic situation is one in which a protagonist is, through no fault of his own, confronted with two inalienable but mutually exclusive goods, and forced to choose between them. A classic Greek instance of this is Sophocles’ Antigone: Antigone, the heroine, must choose between family loyalty and the peaceful stability of her city. Tragedy depends on an idea that there really are undeniable goods, which we can apprehend and appreciate as rational creatures endowed with free will; at the same time, however, it insists that the universe laughs in the face of our dignity, by confronting us with the shame-faced irrationality of capricious fate.

People have typically thought the tragic worldview, thus understood, as fundamentally incompatible with the Christian worldview, for two reasons. First, we Christians believe that, however messy and unpleasant and impossible things seem here below, in the end all shall be well and all manner of thing shall be well and all shall be well. Impossibly tricky or tragic situations will be shown at the last to have been contained in God’s providence, when he shall wipe away the tear from every cheek. For now, we must be patient and endure. Secondly, we know very well that there can never be a really insoluble conflict of goods in Christianity, for God alone is the one highest good: we can never choose against him, and in every decision we face on earth, however difficult, we must choose what will lead us back to our loving Creator and Redeemer. So tragedy gets the moral situation of humans wrong.

Both these reasons for the incompatibility of Christianity and tragedy are, I think, true, but they are not immediately satisfying; they don’t seem to get the whole picture. We may know that in the end everything is going to be alright, but we cannot necessarily feel the consolation of it now; we are in our rights to ask whether present evils are really justified by the fact that God will fix it in the end. I think we would not be honest with ourselves if we could not see some reason for complaint here. If you want to be reassured that this isn’t just impious, then read the Book of Job, or pray with the Psalmist, “Hear my voice, O God, as I complain…” – we have a warrant in divine writ for making our grumbles heard.

As to God as the highest good. That’s undeniable. Even so, there is a paradox running through our relationship to the created order, which St Thomas Aquinas expresses in a metaphysical vein. Things have all their being and goodness entirely from God, and he could deprive them of it at any moment; at the same time, we want to say that God is generous enough that things have a being and a goodness that is really their own – they are not nothing more than pale reflections of divinity. This tension informs the whole of the Church’s teaching about marriage and celibacy: marriage, an exclusive love of another person, is good and written into the created order; at the same time, putting aside that love for God’s sake can be something even better. If that holds true of a romantic partner, how much more does it hold of our relationship to our parents? Alexius was hardly giving up nothing much of value.

“Blessed are they who mourn: for they shall be comforted.” Our mourning is for the present, and Christian living will cause us to mourn. We shouldn’t shy away from that fact – we must not fear to grieve what God takes away from us or demands us to give up, even at the same time as we must do our best to follow after him with undivided hearts. It would be inhuman and a denial of his gifts of nature, not to mourn their death into the order of grace. It is the job of a monk to mourn, wrote St Jerome – to mourn the dying to self that is necessary to live to God. Only after this life shall we be healed sufficiently, and all things with us, that even our losses will count for glory.