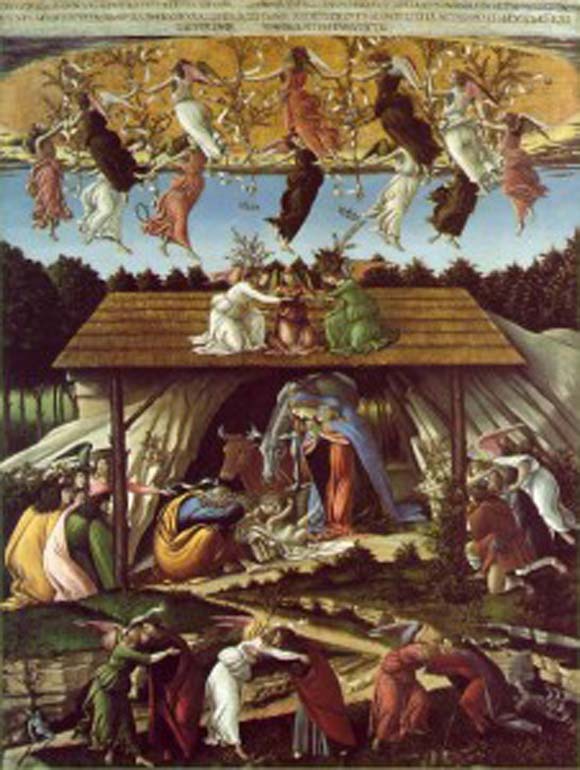 By Robert Verrill O.P.
53
Isaiah 52:7-10, Psalm 97:1-6, Hebrews 1:1-6, John 1:1-18
God became man so that men might become gods. These words of St Athanasius sum up the mystery of the Incarnation. This is what we celebrate at Christmas and it is the source of our great joy.
The Incarnation changes everything. It brings together what the world tries to keep separate – God who is pure spirit, and the material world. Because of this, the true meaning of Christmas is a great challenge to our world. Because of sin, there is a great tendency for us to live fractured dualistic lives where the material reality is separated off from the spiritual reality. From the material perspective, human beings are seen as nothing special, just mere collections of fundamental particles of nature. This is the world of cold facts. This perspective is contrasted with the spiritual perspective where human beings are essentially centres of consciousness, and it is from this spiritual perspective that people try to search for meaning and love. This disunity between materiality and spirituality results in all kinds of evils. When people do not base the spiritual perspective on anything objective, there is no firm foundation to morality – things are only valuable or have meaning because an individual say so. If we believe that from the material perspective we are nothing special, there is no need to treat our bodies with any respect – we just treat our bodies in a way that is consistent with our own artificial set of values.
The sin of Adam in the Garden of Eden, was that he wanted to live beyond his material-spiritual existence, so as to exist in the same way God exists. But in trying to overreach himself, his material and spiritual unity was undermined – he became an enemy of God. God reminds Adam he is dust and to dust he shall return. Ever since the Fall, there has been a war between the material and spiritual realities. Man is uncomfortable in his own skin. He tries to strive for a spiritual existence and to escape from his mundane materiality, but his materiality drags him down and makes him do things he hates doing.

In the Incarnation, all this changes. God, who is pure spirit entered into our material world. The source of all our values, all our meaning and all our loving became a historical fact, Jesus Christ, a child born in Bethlehem 2000 years ago. Through Jesus Christ, not only is our integrity restored, but by taking on human flesh and dying on the cross, God freely gives to man, what man tried to take by force at Eden. God becomes man so that men might become gods. The powers of darkness still try to undermine our material and spiritual unity, but we now know that this darkness is impotent in the light of Christ. In the words of St Leo the Great, we hear the true meaning of Christmas:

O Christian, remember your dignity, and now that you share in God’s own nature, do not return by sin to your former base condition. Bear in mind who is your head and of whose body you are a member. Do not forget that you have been rescued from the power of darkness and brought into the light of God’s kingdom.