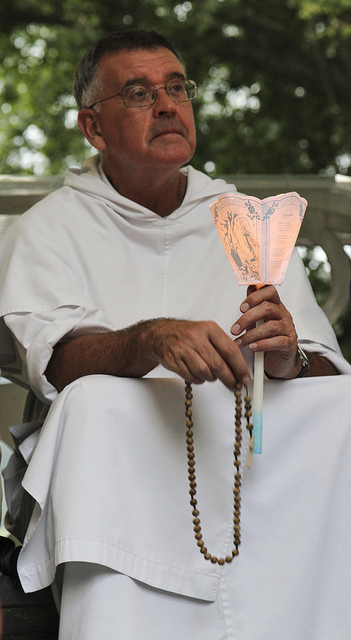 Contemplation and Action: Mary and Martha

Dominicans are useful ‘amphibians’. We seek God as contemplatives, living lives of prayer and study, but only because we have been given a job: the preaching of the gospel.

This, in fact, reflects something that is true more generally of humanity. We are made to inhabit one world in two ways, as animals simultaneously rational and spiritual, the highest in the order of material creatures and the lowest in the order of spiritual creatures. Yet these two dimensions are not in competition, but peacefully complementary. This is why we live, as the Nicene Creed puts it, in expectation of the resurrection of the body (and not merely in the immortality of the soul). What is authentically spiritual does not escape the contingencies of the body, of time and human history, but embeds us within it more authentically. Our contemplative life roots us more deeply in the world, which—despite its scourging by sin—is nonetheless the world in which we the truth about God can be, and actually is, revealed to us. We find God in the world, not by going beyond or behind the world as we have it.

The biblical account of Jesus’ visit to the home of Mary and Martha has often been taken to indicate the ‘superiority’ of the contemplative vocation of monastic and eremitic lives to that of the active lives of the mendicant orders and others: lucky Mary has chosen the better part of clinging to the Lord, and she is more blessed because of it! Whilst most medieval theologians interpreted the story along these lines, Meister Eckhart OP had a different reading of the Mary-Martha story. For Eckhart, it is Martha who has truly matured in her faith and Mary who occupies an ‘inferior’ place. Mary’s desperate clinging is replaced by the maturity of Martha’s recognition that the Lord is present to her in the whole hurly-burly of life, that no matter how hard she tries she cannot evade the Lord’s presence, even if she wanted to. Eckhart thinks, the whole point of the story is that Jesus invites us to get busy with the business of living a life of service to the Lord, to awaken to the divine presence in the world.

It must be said that it’s relatively hard to defend Eckhart’s reading in terms of modern biblical studies, but he is nonetheless highlighting something important. Eckhart was concerned that contemplatives should not ‘technologise’ the spiritual life, presenting the disciplines adopted in their state of life as automatically offering privileged access to Christ over and against the spiritual life of supposed ‘amateurs’! The spiritual tradition reassures us that, even when there is little external business to distract us from Christ, plenty of internal busy-ness remains: the devil certainly can make work for idle thumbs. The point of medieval theology’s stress on a hierarchical ordering of vocations was not, then, to emphasise the distinctiveness of the contemplative calling, but to underline the intrinsic relatedness of all vocations one-to-another within the organic unity of the Church. The hierarchy of vocations here on earth reflects the celestial hierarchy: no single vocation can claim a hegemony over access to the Lord; to be called to any vocation (even the vocation of a hermit) is to be called to a particular way of being with others. Even if Dominicans might like to think we’re unique in being called to activity in contemplation, every Christian is a contemplative-in-action in their own way, faithful to the demands of their state in life, of course. Lent invites us to act more and more from seeds sown in contemplation, rather than simply to act aimlessly, thus responding more faithfully to the challenges of our lives rather than degenerating into reactionaries.