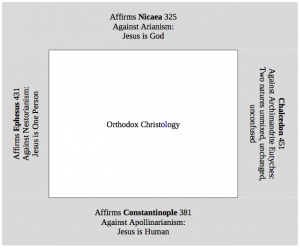 By Oliver James Keenan O.P.
40
The ‘Christological Settlement’ promulgated by the Council of Chalcedon is one of the most decisive texts of Christian theology, serving as the point of reference for the resolution of all future Christological disputes. Chalcedon was principally attempting to respond to a new heretical view espoused by a certain Archimandrite from Constantinople called Eutyches, who proposed that in the incarnation the divine and human substances somehow became ‘mixed’ as a ‘tertium quid’ (a third thing), something more than human but less than divine. Chalcedon’s decree, however, effectively summarises the whole trajectory of Christological thought that developed through four centuries of sustained reflection on the Church’s faith and practice, as has has been reflected in the first three Ecumenical Councils.
The most famous portion of its decree declares that Jesus, the “Lord, Only-begotten, [is] recognised in two natures, without confusion, without change, without division, without separation”. Chalcedon, then, traces the contours of Christology on two axes: the first axis defines the presence of the two substances in the one person Jesus Christ, whilst the second defines that those two substances relate without one dominating or assuming the other, yet without confusion. Chalcedon, therefore, is a ringing endorsement of Ephesus’ affirmation of the hypostatic union, but clarifies that in the reality of the union there is no mixture or change in the natures, which always remain authentically human and divine.
It might seem, however, a bit premature to call Chalcedon’s definition a ‘settlement’. After all, the adjectives it uses (unconfused, undivided, unchanged, unseparated) all say something about what Christ is not, rather than positively affirming a Christological model. Indeed, we might see Chalcedon as erecting four lines that mark the boundary between ‘orthodox’ and ‘heterodox’ Christology. If you stay within the lines, you can call yourself Christian; stray outside them, and you reject the fundamental principle of the faith. Here’s one I made earlier:

It seems to me that part of the attraction of the heresies excluded by Chalcedon’s decree is that we can think of them visually. If we were to take two blobs of plasticine, red for the divine nature and blue for the human, we could, more or less, create a model that adequately reflected the understandings of Jesus excluded by the lines of the Chalcedonian box. When it comes to modelling the space inside the lines traced by Chalcedon, we can’t even begin. So it is perhaps unsurprising that some have asked whether Chalcedon went too far. Is Christology even possible after Chalcedon, or has it effectively excluded every possible human model that we could propose to explain Jesus’s incarnation?
Of course, the incarnation is a mystery and a wonder of the faith, so we can’t expect to exhaust it by blobs of plasticine. But I don’t think that’s how the Council Fathers would have responded. Rather, I think they would have pointed out that we cannot divide the person of Jesus from his saving work. The reason the theologians of the first four centuries were so concerned to get their doctrine of Jesus right is because of what was at stake. As the great architect of Christology, St Athanasius, said, “that which Jesus did not assume he could not redeem”. If Christ in his divinity did not assume a real, full, and complete human nature, then he did not redeem it. If our Christology falls outside the lines of the Chalcedonian box, then we are undermining our salvation, and we might as well give up our practice of praying to Jesus, of offering the Holy Sacrifice of the Mass, and so on.
The definition of Chalcedon, like all the Church Councils so far covered in our series, attempts to give some conceptual clarity and plausibility to a very simple four word statement. Without being facile, Chalcedon is an effort to say of Jesus of Nazareth, “this man is God”, where each of those words is given its full force and weight.