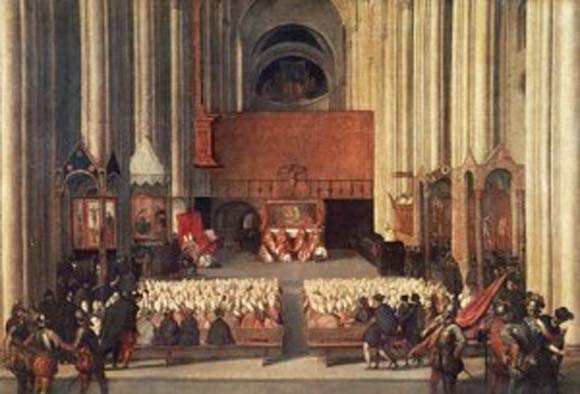 By Br Andrew Brookes O.P.
17
What is an ecumenical Council? Why are there 21 Ecumenical or General Councils?
(Part 2)
After the ‘final’ split of the Latin (West) and Greek (East) speaking Churches in 1054, both continued to have local synods of bishops. In the West these happened at various levels for various territories, including provincial and sometimes national ones. In due course, the Pope starting calling general (i.e. non-territorially particular) ones, starting with Lateran I in 1123. These grew in importance and complexity and in what they addressed. They were intended for the Western Church in the first place, and held in West Europe, but the Pope did have a universal ministry and jurisdiction. Two of them, Lyons II (1274) and the Council meeting at Florence in 1439, were attended by Eastern officials to try and restore Christian unity between West and East. Although agreements were reached no lasting unity was achieved.

The Pope called another western general council at Trent (1545-63) to address the problems of Protestantism. The Protestants, some of whom had wanted a general council called to address their complaints about the Church, rejected its findings. Some of them rejected its authority on the grounds that it was not an ‘ecumenical council’, i.e. one like those of the first millennium that commanded adherence in East as well as West. By this time lists (with some variations) were emerging in the West of the general councils from the period of the Middle Ages. St Robert Bellarmine, in the 1580s, was the first to draw up such a list in which, to respond to the Protestant objection, he called all the councils of the first millennium lists and those of the second up to and including Trent ‘ecumenical’. This list soon found its way into official Vatican documents and Papal discourse. (Constantinople IV (869-70) was first given ‘ecumenical status’ by Papal officials late in the 11th century principally because one of its canons argued strongly against state interference in Episcopal appointments. Popes endorsed this status.) It is the list we now have, to which, of course, have been added Vatican I and II. Though there are other important, if officially less universal, church councils we shall in the fist place examine those now listed as the 21 Ecumenical Councils of the Church.
Some prefer to name them the 21 General Councils, out of respect for the sensibilities of Eastern Christians who generally restrict the term ‘ecumenical council’ for the first 7 on the Papal list. The Popes use both terms, sometimes choosing ‘general’ to show respect to the Eastern Churches. Though these councils sometimes treated the reconciliation of Christians, the word ‘ecumenical’ is not being used in this modern sense of ecumenism in the term ‘ecumenical council’. 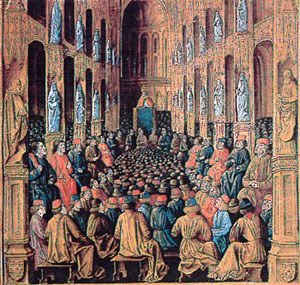 The Church’s theological understanding of councils, and the expression of this in canonical and procedural terms have developed over history. The Church has come to recognise that although an ecumenical council requires the presence of many Bishops, it is the role of the Pope that is crucial in determining what is and is not an ecumenical or general council. As Lumen Gentium (LG) puts it ‘there never is an ecumenical council which is not confirmed or at least recognised as such by Peter’s successor. (LG 22)’ It is his universal jurisdiction, unique to him as an individual among the other bishops, that makes this possible. In actual fact the extent of active participation of the pope has varied a lot historically in different ecumenical councils. However, the Church in her wisdom now also states “And it is the prerogative of the Roman Pontiff to convoke such councils, to preside over them and to confirm them. (LG 23)” However, the bishops do not serve as mere adjuncts of Papal ministry. They have their own dignity and office, directly conferred by God and given in Episcopal ordination. Thus ecumenical / general councils, in which they come together, in communion with the Pope, express the highest authority of the Church, applicable in teaching on faith and morals and in regulating the liturgy and in other disciplinary measures.