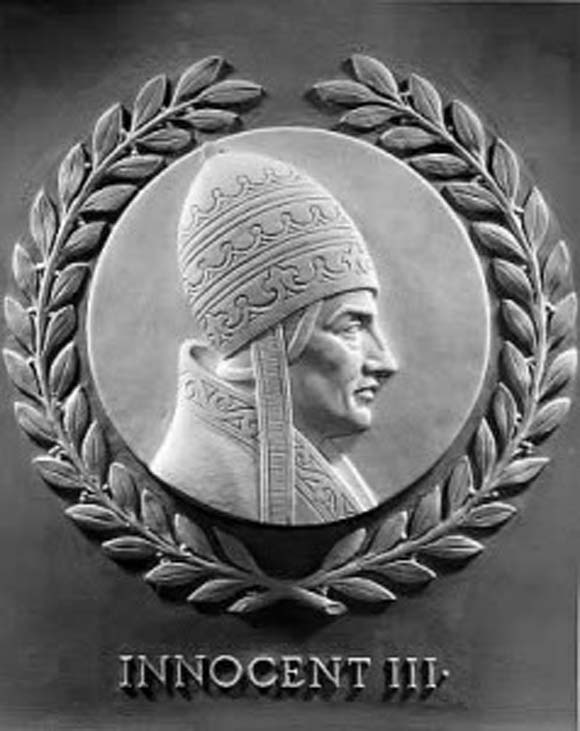 By Matthew Jarvis O.P.
43
The Fourth Lateran Council (November 1215) represents a high-point in ecclesiastical governance in the Middle Ages. It is also of special interest to us here as it formed the backdrop to the establishment of the Order of Preachers in 1216.
Commonly referred to in canon law as the ‘General Council of Lateran’, this great convocation was presided over by Pope Innocent III, who, some, argue was the most powerful pope in history. Innocent ensured that the papal privileges and ecclesiastical liberties claimed by the first three Lateran Councils were now consolidated and extended. The prestige of the pope, combined with a long period of convocation (April 1213 to November 1215), meant that Lateran IV was the best attended of all the medieval councils and could strongly claim to be ‘ecumenical’. There were present: 71 patriarchs and metropolitans, including those of Constantinople and Jerusalem; 412 bishops; some 900 abbots and priors; delegates from the patriarchs of Antioch and Alexandria; and envoys from the Holy Roman Emperor and several other Christian states. Seventy decrees or canons were drawn up in advance and were easily approved.

Europe was changing fast in the early thirteenth century. The growth of towns was matched by a burgeoning mercantile class and the spread of literacy. Together with the proliferation of new religious orders through the 12th century, this gave the impetus to a new rationalisation of legal codes, especially the canon law Decretals compiled by Gratian. While official structures were waxing to meet these new challenges, a revival of popular piety was bringing many ordinary people back to a more internalised Christianity. This aimed at rediscovering the Scriptural roots of the faith, and was often expressed through a commitment to evangelical poverty. Lay movements, such as the beguines, flourished. But many turned to heretical doctrines and openly challenged Church authority. The Waldensians, for instance, repudiated the sacraments, oaths, the cult of the saints, and Purgatory.
It is unsurprising, then, to find concern for true Christian teaching and practice at the heart of Lateran IV’s decrees. Canon 1 reiterated the the creeds, including an important reference to Transubstantiation, at a time when many Eucharistic miracles were being reported. Other canons insisted that relics had to be verified before acceptance, by documentary evidence and (if necessary) trial by fire or water. To neutralise the heretics’ greatest critiques, clerical discipline was tightened: Lateran IV forbade the clergy dishonest pursuits, attendance at frivolous entertainments, games of chance, and visits to taverns. This last exclusion did not apply to ‘necessary’ visits, namely while travelling – which perhaps explains why the early Dominicans were keen to be itinerant preachers! The clergy were also banned from meting out or participating in death penalties; which is why the capital sentences of Inquisitions were always carried out by secular authorities, not the Church. However, ecclesiastics themselves were only to be tried by Church courts, even for criminal actions; and this remained the case right up to the French Revolution.
Sacramental practice was newly enjoined upon all the faithful, especially Communion at Easter and Confession to one’s parish priest at least once a year. This merely confirmed existing legislation and custom, but Lateran IV had such clout and was so widely enacted that this particular canon (21) has historically been seen as a significant step.
Canons 4-5 exhorted the Greek Orthodox to unite with Rome, and reiterated papal primacy, while Canon 1 dogmatically defined the Filioque. Interestingly, Rome now acknowledged Constantinople as the second see of Christendom, ahead of Alexandria, Antioch and Jerusalem. This is largely explained by the Fourth Crusade and its disastrous sack of Constantinople in 1204, which put the eastern capital under Latin rule. Under these unhappy circumstances, we should be wary of claiming too strong an ecumenical success for Lateran IV.
Finally, there are two canons of special significance for Dominicans. Canon 13 forbade the establishment of new religious orders with new rules, forcing St Dominic to adopt his familiar Rule of St Augustine as the foundation of Dominican life. But it is Canon 10 that stands out with its call for bishops to appoint preachers to support them in their ministry of the Word. Where bishops suffer from overwork, illness, external hostility, or ignorance(!), they are to

provide suitable men, powerful in work and word, to exercise with fruitful result the office of preaching; who…diligently visiting the people committed to them, may instruct them by word and example.

These men are to be the bishops’ coadjutors and assistants, not only in the office of preaching but also in hearing confessions, imposing penances, and in other matters that pertain to the salvation of souls.

So, when the Dominican Order was established by Pope Honorius III just a year later, its Primitive Constitutions emphasised the fact that it was ‘known from the beginning to have been instituted especially for preaching and the salvation of souls.’ In 1215, the great days of the mendicant friars were just beginning, but here was a timeless call for new workers in the Lord’s vineyard. Lateran IV set the tone for those first generations of Friars Preachers, and even now, centuries later, the call to continue the apostolic preaching can still be heard.