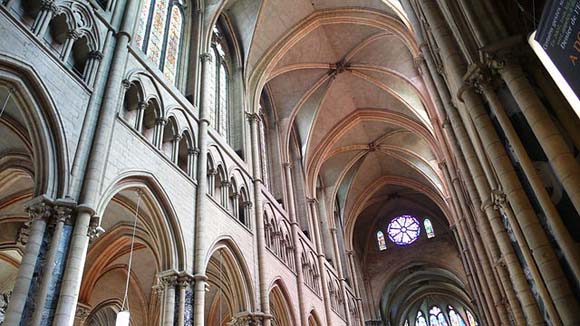 Godzdogz
Home  /  Godzdogz  /  Councils of Faith – Lyon I and II

Councils of Faith – Lyon I and II

Having completed our journey through Lent and Eastertide, we return now to the subject we’ve been looking at during this Year of Faith, namely the Ecumenical Councils which have shaped and defined our understanding of the Faith. In the two councils we turn to now, however, we see that doctrinal concerns are not the only reason for calling an ecumenical council. As with some of the other mediaeval councils we have already looked at, the First Council of Lyon was called to deal with threats to the Church’s liberty, which took the form, in 1244, of the Holy Roman Emperor Frederick II besieging Rome. The Council deposed and excommunicated the Emperor for his attacks on the Church, though the Pope found himself unable to enforce the decree – a reminder that the power and influence of the Church in the Middle Ages can sometimes be exaggerated.
Lyon II, on the other hand, did have doctrinal concerns – not those which threatened to split the Church, but those which already had: Lyon II was the first attempt to overcome the schism between East and West which (while scholars will argue about the exact course of events) we usually date to 1054. The doctrinal component of the split (and of the moves to reconcile it) should not be exaggerated, though. After all the polemic and mutual mistrust had been put aside, the only doctrinal question which the Council had to address in detail was that of the procession of the Holy Spirit: in the Latin usage which, we now know, derived from the response of the Spanish Church to denials of the equality of Father, Son, and Holy Spirit, the Creed professed that the Holy Spirit proceeds from the Father and the Son (Filioque in Latin), while the Greek text adopted at the Council of Constantinople spoke only of his procession from the Father. At Lyon, the Greeks present accepted the admissibility of the Latin usage, but we should also note that the Latin position was clarified, making it clear that we do not mean to suggest that the Holy Spirit has two sources of his being (‘non tanquam ex duobus principiis’), but rather to assert that the Holy Spirit is as much ‘the Spirit of the Son’ (cf. Gal 4: 6) as ‘the Spirit of the Father’ (cf. Mt 10: 20).
That the union achieved at Lyon did not last (the laity did not accept their bishops’ actions – which they perceived as resulting from political pressure – and a new emperor saw the pro-union bishops deposed) shows us the difficulty of the task of pursuing the unity of Christians, and the importance of it being a work of the whole Church, and not simply a clique of those who “do ecumenism”. At the same time, the decision of Lyon II (which demanded far less of the Greeks than many Latin polemical writers of the time, on questions ranging from clerical celibacy to the kind of bread used for the Eucharist) reminds us not to let secondary and cultural differences get in the way of the pursuit of that unity for which Our Lord prayed.

Picture of Lyon Cathedral (where both Councils were held) by Welleschik, used under Creative Commons license.