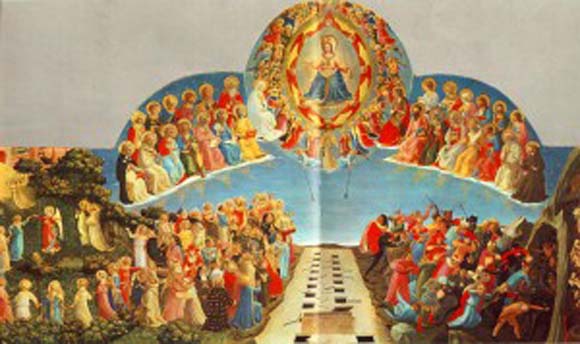 Credo 44: We look for the resurrection of the dead …

The end of the Creed – the symbol of our Faith – reflects the end towards which our faith is oriented: the resurrection of the dead.

Since we believe in the resurrection of Christ from the dead, we firmly believe that the righteous will live for ever through sharing in His resurrection. This has been a central aspect of Christian faith from the beginning. But isn’t this a little far off to consider at the moment?

Christ will raise us up on the last day; but in a sense we are all risen with Christ. By the virtue of the Holy Spirit, Christian life is already a participation in the death and Resurrection of Christ now on earth. We are united to Christ by baptism, and so we already participate in the heavenly life of the risen Christ, but this life remains ‘hidden with Christ in God’. We have already been raised by the Father to sit with him in the heavenly places in Christ Jesus. As we are nourished with His Body in the Eucharist, we already belong to the Body of Christ. When we rise on the last day, we will also appear with Him in glory.

While we wait for that day, the body and soul of the believer already participate in the dignity of belonging to Christ. This dignity demands that both our own bodies and the bodies of all other human beings should be treated with respect. Through the justification we have celebrated in the Creed, we declare that we have been won for Christ. Our whole being and nature has been united with the Godhead. In these last days, we await the consummation of that glory.