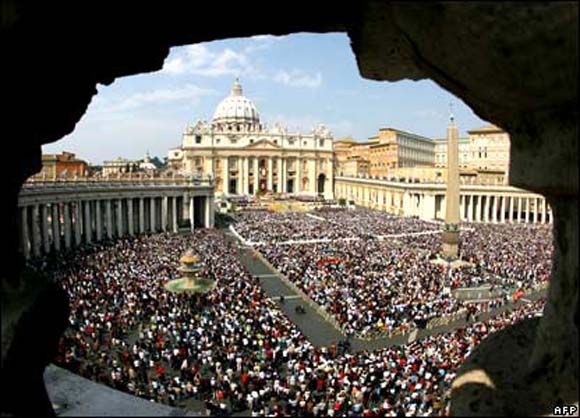 To profess that the Church is ‘catholic’ is to say something about the very essence of the Church. When we say this in the Creed, we are not using the word as a title, or a proper noun. We are saying something about the nature of the Church; we are speaking of a spiritual reality rather than something geographical or statistical. The word ‘katholikos’ in classical Greek was used by philosophers to indicate a universal proposition. Thus, when this idea is applied to the Church, then, in the words of Pope Benedict XVI, “The translation of catholic is ‘including the whole’; it signifies ‘relating to the whole’. It is a way of expressing the fact that the Church belongs to the whole world, to all cultures and every age.”

Why is the Church universal? Speaking of the Church, St Augustine explained: “You unite together the inhabitants of the cities, the different peoples, nay the whole human race, by belief in our common origin, so that human beings are not satisfied in being joined together, but become in some sort brothers.” This belief in the fraternity of all humankind is thus rooted in the reality of God’s fatherhood over all. Moreover, because of the universal salvation that Christ alone won for all creation, so “God has willed that the Church founded by him be the instrument for the salvation of all humanity (see Acts 17:30-31).” So, the Church’s duty as ‘catholic’ is to gather all people in the Spirit of love, to reconcile the world in Christ and to bring all into communion with the Father.

This belief flows into three aspects of the Church’s life. Firstly, the Church has an intrinsically missionary orientation as she seeks to serve humanity by proclaiming the Gospel, by word and deed, to all people. As the Second Vatican Council says: “Though God in ways known to Himself can lead those inculpably ignorant of the Gospel to find that faith without which it is impossible to please Him (Heb. 11:6), yet a necessity lies upon the Church (1 Cor. 9:16), and at the same time a sacred duty, to preach the Gospel. And hence missionary activity today as always retains its power and necessity.” Such activity is an expression of the Church’s faith in the catholicity of the Gospel.

Secondly, when the psalmist says in Psalm 87:5, “Zion shall be called ‘Mother’ for all shall be her children”, these words have been seen in the light of Christ to refer to the Church who has been constituted by Christ as ‘mother’ of all peoples. As such, Vatican II also teaches that “In virtue of her mission and nature [the Church] is bound to no particular form of human culture, nor to any political, economic or social system.” Rather, in the universality and diversity of the Church, she expresses more clearly her motherhood over all people. As Pope Benedict has said: “[The Church should] bring the whole wealth of human existence, in all its languages, to God – and should be thereby herself a power for reconciliation among people.” So, the Church’s diversity and expanse is a mark of her catholicity.

Thirdly, in the work of reconciliation that the Church is engaged in, by the Christian unity that she constantly strives for, and by the peace among all people that she mediates, the Church becomes an ever clearer sign of universal salvation in Christ under the one God and Father of us all (see Ephesians 4:6). For the sign she displays through such activity is ultimately one of charity, and such charity is itself a mark of the Church’s intimate union with God. It is this same communion with the living God that she offers to all humankind by virtue of her being catholic.