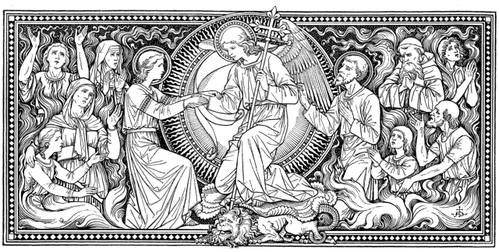 We must pray for the dead: it is precisely the reason for today’s commemoration. When our day comes we will endure the judgment over the responsibility that we have in the history of our lives, and after that, one of the possible outcomes could be to be sent to Purgatory and there receive an intense session of “soul-lifting” in order to enter in the joy of the saints in an appropriated manner… But such a simple and naïve description of the doctrine of Purgatory might not manifest the deepness of the terrifying mystery of the death and even less would motivate a fruitful prayer. 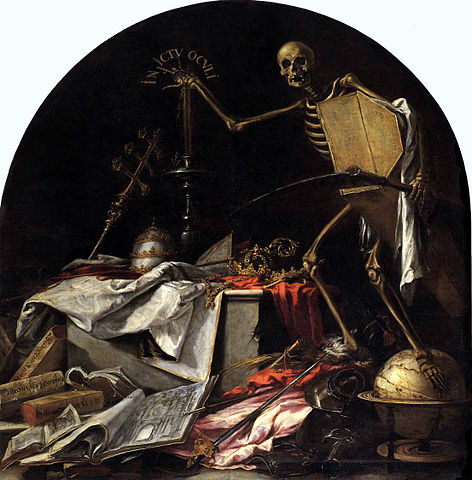 Spanish culture is well known for its passionate taste for mysterious and supernatural things. The voracity of a vertiginous movement between diametrical points, exemplified in the sinuosity and sensuality of our painting, constitutes the leitmotiv in the life and development of the human phenomenon in Spain and her children. You only have to look at the astonishing celebration of the day of the dead in Mexico, where macabre and holy means the same, Holy Week in the Philipines or the drowsing and captivating Flamenco in Andalucía, and you will recognize immediately that the Spaniards are a people who are stubbornly looking for a closer contact with transcendental reality. Precisely the painting at the head of this text, In ictu oculi of Juan Valdes Leal, constitutes a mockingly lament for those who are unable to live without living in themselves, as Saint Theresa of Avila would say.

What a terrifying experience is to pass through the atrium of the Hospital de la Caridad in Seville and contemplate that yellow and brilliant skeleton… it seems that he is able to hurt you with his sharp scythe in the blink of an eye. It is precisely the way in which everyone with a certain level of humility would understand the reality of a sure death after an uncertain period of mortal life. Death, exercising its despotic dominion over the world, is implacable and everything, even the glory and the fame that we would have accumulated in the life will be crashed by its danse macabre. Sincerely I think that this would be enough motivation to raise a prayer for the people called to this trance. But what sort of prayer would it be? Obviously a desperate one. 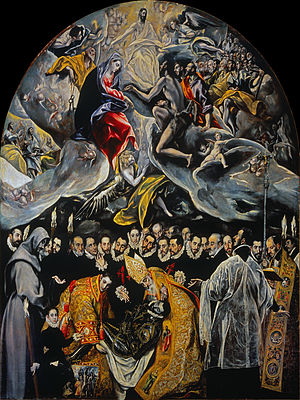 Fortunately Spain enjoys the presence of another magistral work of art that could be taken to exemplify the very Christian approach to the mystery of death. In El entierro del Conde de Orgaz from the genial Domenico Theotokopoulos (el Greco) what in principle is no more than a burial is transformed into a portentous miracle. Between Christ, who is depicted as supreme judge, and the rotten corpse of the Count of Orgaz, the soul of the latter, like a little baby is introduce in the new life through the prayers and intercessions of the earth and the proactive action of Mary, the mother that make haste to embrace the new-born man. In the painting there appears a theological image of what happens when someone dies. The attendants of the burial are petrified and submerged in pain, sorrow, surprise etc at the vision of two saints, but completely unaware of what is really going on. Saint Agustine and Saint Stephen are the priest who are depositing the body in the ground, but the real miracle, the crucial part of it is something that is happening outside this world. The contrast between the darkness of this imperfect world and the dynamic joy of the blessed; between the glorious body of Christ and the mortal one of the Count; the tenderness of the Saints holding the dead Count and the impassibility of the priest officiating at the ceremony… This image perhaps would bring us to a better kind of prayer, in which the image of a spectacle of mercy is enough motivation to pray for those who are now facing their possible new life in heavens. On days like today I always have in mind El Entierro. It makes me hopefully happy and for that reason it helps me to pray in the correct manner for my brethren. 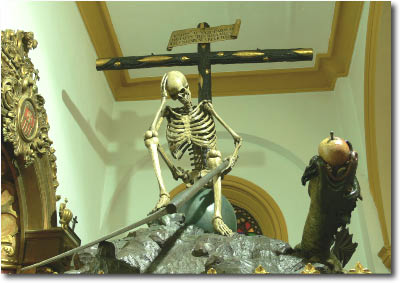 So what happened with that terrible image in the Hospital de la Caridad? The fears of the people of Seville are mitigated every Holy Saturday, just before the magnificent celebration of Easter. In one of the allegorical representation that are carried in procession during Hole Week, our skeleton appears in a defeated posture under an empty cross with his scythe lying in the ground and his skull posed in one of his hand as a symbol of desolation. Where the motto In ictu oculi was a terrifiying warning, now a flag saying Mors mortem superavit declare the victory of the true hope. The fear of death might be something natural due to our mortal condition, but is something that, after the great victory of Jesus Christ, must be reserved for artists.