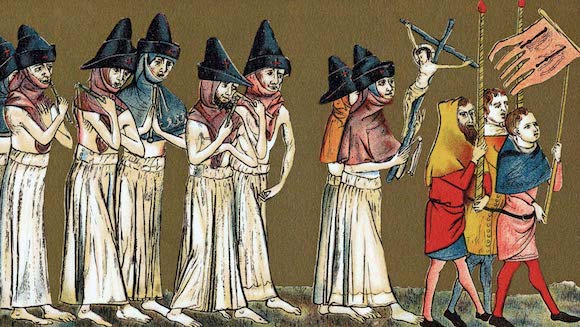 Godzdogz
Home  /  Godzdogz  /  ‘Do you think this means that everything will change?’

‘Do you think this means that everything will change?’

By Br Albert Elias Robertson, O.P. | Recently asked in a queue, “Do you think this means that everything will change?” Br Albert reflects on change, continuity, and renewal in the face of Coronavirus.

A couple of weeks ago I set off on a trip to see friends and family in Australia and New Zealand. It was a last chance to see them there, and I knew that after it, I’d have to wait for them to come to the UK to see me because there was almost no chance of seeing them again out in Australia and New Zealand. Fairly soon after my arrival everything changed; first quarantine, then border closure, then the evaporation of flights and the near collapse of the aviation industry. Having reconciled myself to a rather extended stay waiting for flights to resume, I was able to get out towards the end of last week and return to Oxford.

Standing in an extremely long queue waiting to see if I could actually get on a flight, typical British behaviour kicked in among all the passengers as we rather awkwardly shared our tales of holidays curtailed, plans changed, and events cancelled. This was a pretty extraordinary situation for me, and I’d never experienced anything quite like it, and having shared this thought with my nearest neighbour in the queue, British stoicism cracked, and my neighbour turned to me and asked ‘Do you think this means that everything will change?’

It’s something which I’d been asked a number of times over the past few weeks – when public Masses were suspended in the UK while I was away, a few people emailed me asking what they should do, how they should live the Christian life when they could not attend Holy Mass. My response, other than the standard advice of spiritual communion, spiritual reading, and praying the rosary, was to trust that things would return to normal after a time, and that perhaps from this Eucharistic Fast, a kind of long Holy Saturday, great spiritual renewal would come.

Of course this is the experience of the Church from times of oppression and pestilence – suffering has caused a renewal, be it oppression and martyrdom inspiring fresh zeal in those who survive, or spiritual renewal from a time of disease. In the Order of Preachers, St Catherine of Siena’s spirituality was in many ways defined by the experience of the Black Death which arrived in Siena during her early childhood. The structural changes to society brought, in a more circuitous way, the strict observance in the Order, giving us Bl John of Fiesole (Fra Angelico), St Antoninus of Florence, Savonarola, and many other saintly friars.

I suppose the woman in the queue with me in the airport was not quite so worried about spiritual renewal, but rather when the structures of society would return to normal – whether schools and offices would look the same after remote working, how the economy would recover, what effect self-isolation would have on an already fractured society. The Black Death has been credited with a radical changes to society, bring about everything from the destruction of feudalism, the creation of a middle class, empowering women, developing modern English, and ushering in the perpendicular style of architecture. Part of this is obviously because the affects of the plague were so great, with some places experiencing a sixty per cent mortality rate leaving villages empty of labouring peasants and weeds in fields where there should have been crops. People’s lives changed hugely as forced land sales and odd inheritance patterns caused by death meant that some people lost their entire family, but gained a fortune.

But of course many of the things which are identified as radical changes put down to the Black Death were actually already in progress by the time the Plague hit Europe, and were probably only accelerated by the plague, not caused by it. As Benedict Gummer shows in his history of the Black Death in Britain, the main focus was survival, and so continuity was more important than radical social change.

William Edington, bishop of Winchester and successively Keeper of the Wardrobe, Treasurer, and finally Chancellor, set about a fiscal restructuring of England which aimed to keep up business as usual. With a high death rate leading to a smaller labour force, wages increased, but Edington capped the maximum rate at which people could charge for work – infractions led to fines.

In foreign affairs too, things did not change all that much. Just before the outbreak of the Plague, Edward III had staged a series of tournaments to celebrate his string victories over the French which had begun in 1346 with victory at Crécy and culminated in the capture of Calais. The last of these was held in Canterbury on 14 July 1348, with costumes designed and produced for the entrance of the victorious King Edward into the city, requiring eight pounds of Cyprus gold thread, five pounds of scarlet silk, and three thousand gold leaves; an opulence which does not sit easily with what was around the corner. There was not another tournament until April 1349 by which time perhaps half of those in the crowd the previous July were dead. Edward lost both his baby son William and his fourteen year old daughter Joan to the plague, but three months after her death, while the plague was at its height in London, he was back in armour fighting the French at Calais.

Perhaps the answer to the question posed by my neighbour in the airport is that much will stay the same because society wants, in fact needs, continuity: a functioning economy, public health system, education for children and work for adults, and the normal conditions in which all these things can be done. Christians also want this normality, we certainly want to attend Mass and return to the normal routine which is the framework for our working out of our salvation. But I hope what we also want is renewal; the renewal that brought our Order St Catherine of Siena, St Antoninus of Florence, and Fra Angelico. Perhaps one way to do this might be, paradoxically, to make the Eucharistic Prayer the focus of our prayer. In the Roman Canon we pray ‘…we, your servants and your holy people, offer to your glorious majesty from the gifts that you have given us…’ It’s only if we live this time as a gift from God which we can offer back to Him that this spiritual renewal becomes possible.