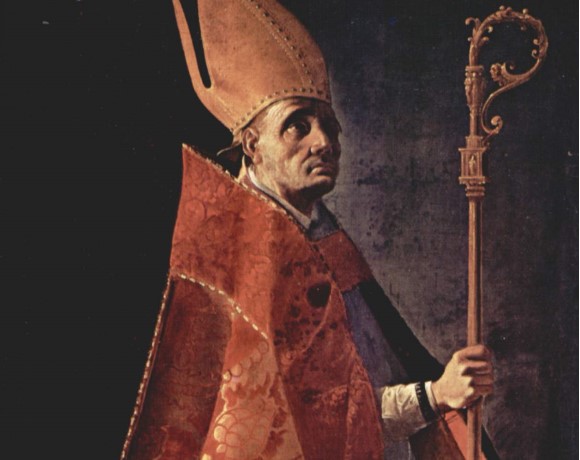 Doctors of the Church: Ambrose

By Br Vincent Antony Löning | Ambrose of Milan: what sort of personality hides behind this name? Pastoral bishop, monastic doctor, poet, or political agitator? The breadth of his achievement is outstanding, particularly if we consider the troubled times he lived in.

Ambrose of Milan: what sort of personality hides behind this name? Pastoral bishop, monastic doctor, poet, or political agitator? The breadth of his achievement is outstanding, particularly if we consider the troubled times he lived in. For he lived in the same century that had earlier seen Emperor Constantine’s publication of the Edict of Milan which allowed Christians to build churches and worship freely. Despite this, the Roman Empire was still deeply divided: politically, between East and West, but also religiously, between Christians and pagans, between Arians, who rejected the Council of Nicaea, and Catholics who accepted its Trinitarian teaching. St. Ambrose was born in an aristocratic Roman family, at Trier around 339, so within a few years of Constantine’s death. It was also a pious Christian family, unusually at a time when much of the Roman aristocracy was still pagan, and Ambrose’s sister Marcellina would go on to become a nun and a saint – we still have some of Ambrose’s correspondence with her, which shows what high value he placed on virginity. He then mostly grew up in Rome, received a classical education, entered the imperial administration, and was eventually nominated as provincial governor which is when he took up his headquarters at Milan, which was at this time one of the Imperial capitals. Like much of Italy, the city’s Christian population was then bitterly divided between Catholics and Arians. When the episcopal see became vacant, Ambrose won rapid approval as a compromise candidate between the Catholic and Arian faction – he had after all been a civil servant rather than an ecclesiastic, and was not even baptised at this point when child baptism was still fairly uncommon. The catechumen Ambrose reluctantly agreed, was promptly baptised, received the minor orders in the course of the week, and was eventually ordained priest and consecrated bishop at the end of it.

As bishop, Ambrose led an austere life, and reformed his clergy by encouraging them to adopt a semi-monastic mode of life. He gave much of his private wealth to the poor, and kept a policy of always have an open door and a ready table for guests of any standing. Some travelled from very far to see him. St Augustine was one of these; it was his discussions with St Ambrose that finally persuaded him to undergo baptism himself before returning to his native Africa. (In his Confessions he recounts a scene now famous of being astonished at Ambrose’s habit of reading without moving his lips.) Ambrose’s concern for the poor was not merely practical, but also theological, insisting on the justice due to them, whether Christian or not, and his writings provide much of the basis for later Catholic Social Teaching.

Ambrose staunchly defended Nicene Christianity and in this context started grappling with the problem of Church-State relations, again both theologically and practically. His principles were very sorely tried when the Arian Empress Justina tried to have some of the churches in Milan confiscated and handed to the use of the Arian population of the city. Ambrose firmly refused, and personally led a prayer vigil in the threatened churches to prevent their takeover, not hiding that he did not fear martyrdom during these events.

He did much to standardise the liturgy in his diocese – to this day Milan has a distinct rite within the Latin Church, referred to as the Ambrosian rite in his honour, though it has undergone a few changes since his day. Ambrose was also a poet, and the whole Western Church owes some of its most beautiful Office Hymns to him.

Thus it is with the man, but he was also a scholar and a Doctor of the Church. Being fluent in Greek, he brought to the Latin West many of the theological insights developed by the Eastern Fathers, and especially via his pupil Augustine, his influence on theological thought in the West is of the greatest importance. In particular, he is a key and especially clear early exponent of the Church’s doctrine of the Sacraments in his De Sacramentis and De Mysteriis, writing particularly beautifully about Baptism and the Eucharist.

It seems fitting to end with the special love and devotion that Ambrose experienced and helped to spread towards the Blessed Virgin Mary. He teaches us to pray, ‘Hail, Mary…’ ‘For Mary alone was this salutation reserved; for she alone is rightly said to be full of grace, who alone obtained that grace which none other had deserved, that she would be filled with the author of grace’ (In Lucam II, 9).