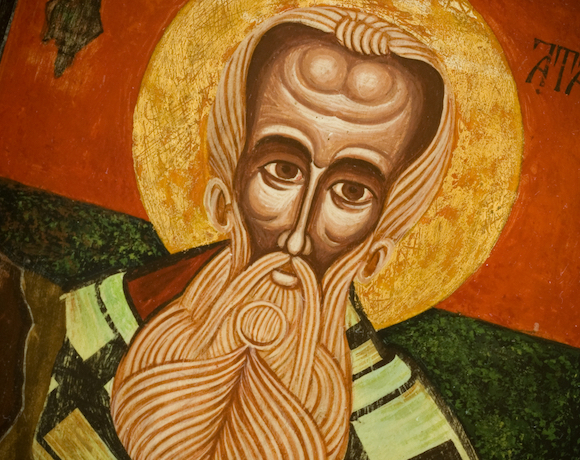 Doctors of the Church: St Athanasius

By Br Thomas Thérèse Mannion | ‘God became a what we are in order to make us what he is’ – St Athanasius in The Incarnation of the Word.

There are four basic things we can learn from Athanasius; God loves you, Jesus is fully God and fully human, read scripture in light of the whole of scripture and do not be afraid to be persecuted for doing what is right because your reward will be great in heaven.

Arius claimed Jesus was a creature ‘halfway’ in between God and man, a sort of hybrid – half God and half man. Arius claimed Jesus is similar to the Father in the way we are similar to our parents homoiousios meaning of similar essence. This belief that denies the divinity of Jesus Christ became known as Arianism. The Arians believed the Son came into being, he was not co-eternal with the Father, he was created. Crucially the Arians denied Jesus is God.

The Arians drew on scriptures which they claimed proved Jesus is subordinate to the Father. Passages such as John 14:28 ‘You heard me say to you, “I am going away, and I am coming to you.” If you loved me, you would rejoice that I am going to the Father because the Father is greater than I’. They would also draw on passages where Jesus speaks of being sent by the Father.

The Church met to discuss Arianism at the Council of Nicaea in 325. The Council replied that there are passages in scripture which do show Jesus’s subordination to the Father in his humanity, but there are other passages which show Jesus is equal to the Father. For example: ‘In the beginning was the Word, and the Word was with God, and the Word was God. He was in the beginning with God. All things came into being through him, and without him not one thing came into being. What has come into being in him was life, and the life was the light of all people… He was in the world, and the world came into being through him; yet the world did not know him… and the word became flesh and dwelt among us, and we have seen his glory, the glory as of a father’s only son, full of grace and truth’ (John 1:1-4,10,14).

Here we see Jesus, the Logos, the Word is God and distinct from God. How can this be? Because Jesus is of the same essence of the father, Homoousios (that little ‘I’ makes all the difference) meaning he is God, but he is not the Father himself; rather he is with the Father, he is the Word who became flesh. Jesus is for us the face of the Father (John 14:9).

In the aftermath of the council which declared against Arius, Athanasius became Bishop of Alexandria (where Arius had been a priest) and a key figure defending the Council’s decision to the point of being exiled on several occasions. Athanasius found his exile from his home very difficult as any human being would. This being said, he remained committed to what he knew to be true – that in order for Jesus Christ to be the bridge that reunites God with humanity, Jesus would have to be fully God and fully human. Why?

Jesus must be fully human to be our representative before the Father. He is the complete bridge. He takes upon himself the sins of the world, the punishment for which is death; yet he lives. So because he is the perfect representative of humanity and God himself he is capable of paying perfectly the price that we cannot pay, satisfying both justice and mercy. God himself pays the debt we cannot pay and forgives you. Why would God do that? God loves you (John 3:16), in fact God is love (1 John 4:16).

There are then four basic things we can learn from Athanasius; God loves you, Jesus is fully God and fully human, read scripture in light of the whole of scripture and do not be afraid to be persecuted for doing what is right because your reward will be great in heaven.

St Athanasius, Father of Orthodoxy, Pillar of the Church and Champion of the Divinity of Christ, pray for us.