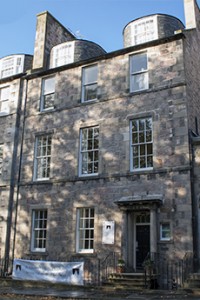 The Edinburgh Priory was first founded about 1230-1, in the reign of King Alexander II. The Priory was subsequently destroyed in 1559, during the reformation. The Priory was re-founded in 1931, when the English Province of the Order of Preachers acquired No 24 George Square in Edinburgh, thanks to the generosity of founding benefactors, Canon John Gray, Marc-André Sebastien Raffalovich, and Mrs Charlotte M Tytus (a trio of donors who each led fascinating lives, the former two Catholic converts and the latter also the purchaser of the site of the current Oxford Priory for the Order).

So, after an absence of almost 400 years, the Dominican friars were back, and at the invitation of Archbishop Andrew Thomas Joseph McDonald OSB, they established a Catholic Chaplaincy for the students and staff of Edinburgh University. From the beginning, the Georgian town house at 24 George Square was thought to be ideal for a new chaplaincy centre because it boasted what was reputedly “the largest drawing room in Edinburgh”, and this first-floor room, with an apse-like bay window, served as the chapel of the priory and chaplaincy until 2012.
Despite such a large drawing room, from an early stage it was, understandably, the hope that a purpose-built chapel might be built at some point. However, these plans were a long time in the realisation. For many years the best was made of a less-than-ideal situation. Indeed, prior to the Second Vatican Council, the furnishings of the chapel would not have looked out of place in a minor basilica. However, in the last decade the current set-up was starting to become untenable. The chapel had just become too small for the number of Mass-goers, and furthermore there was no disabled access.
It was thus with great joy that after a significant fundraising campaign, on 15 August 2012, precisely 781 years after the first Dominican priory opened in Edinburgh, the new chapel of St Albert the Great was dedicated by the Archbishop. Whilst it was a long wait it has been worth it, and the Priory’s garden is now home to one of the finest modern chapels in the country; a fact recognised by numerous architectural awards, but more importantly the number of people who wander in from the meadows to sit in the chapel and pray during the day, as well as the appreciation of the regular congregations.
From 1981 to 1999 Edinburgh was also home to the Novitiate of the English Province and most of the current office holders in the Province completed their novitiates there, before it moved to Cambridge. A full list of all the friars who have formed the community in Edinburgh is available here: http://scotland.op.org/edinburgh/past_members.php
The Priory hosts four busy Masses on a Sunday in its role as the Parish of the University as well as two daily Masses during term term-time (one outside) and public celebration of Lauds and Vespers each day.
Running the university chaplaincies is the major apostolate of the house and it is currently thriving. As well as acting as a home from home for students, the Chaplaincy, most crucially, is a centre dedicated to forming people in the Faith for the world, today and tomorrow. The Student Mass on a Sunday evening is preceded by half an hour of Adoration of the Blessed Sacrament, and the new Chapel (built as large as planning permission would allow) is standing room only with around 140 students in attendance. The liturgy is beautifully celebrated and this is a greatly assisted by the excellent student-run choir. After this Mass there is well-attended social event in the Student’s Common Room located on the ground floor of the Priory. The Common Room has a well-stocked library for the students as well as a kitchen, and is much appreciated place for socialising throughout the week.
One of the most impressive features of the Chaplaincy is the level of involvement beyond the Sunday obligation. On average there are around twenty students at Morning Prayer each day who then have their breakfast in the Common Room before heading off to lectures, the library, or back to bed. Lunchtime Mass is also well attended and a meat-free jacket potato lunch is held each Friday. As well as Mass and the Divine Office, there is also a student-cooked meal each Wednesday night and Bible study, or other catechesis, is a feature of many other nights of the week as well various other socials.
The students and the friars also have good links with the local convent of St Catherine. This convent run by the Mercy Sisters plays a key part in the provision of food for the homeless in Edinburgh, along with other services: http://www.mercycentre.org.uk
Other student activities include Cups of Compassion, another initiative with the homeless, as well as a recently founded Scout Group which is part of the Scouts of Europe – a Catholic movement. There is also a vibrant pro-life society open to members of all religions and none, but in which the Catholic students play an integral part: http://www.edinburghlifesociety.co.uk
Not only do the friars minister to the spiritual needs of the University of Edinburgh, Edinburgh Napier University and Queen Margaret University, but they have also have also provided a Rector to the University of Edinburgh and Fellows of the Faculty of Divinity. In addition the friars are also on-call chaplains for the local hospital.

The Priory also plays host to the recently founded Albertus Institute, which aims to contribute to the contemporary discussion between religion, the sciences and other intellectual disciplines. The Institute encourages public debate in this area by sharing the Christian, and in particular the Catholic, view in an open and welcoming way and by listening to other points of view in the same spirit. The Institute provides a platform for this debate through public lectures, seminars and conferences. As the work of the Institute develops, its website will provide access to various resources such as lecture materials, podcasts, discussion points and more. The next conference which it is hosting is on Faith and Cosmology: http://albertusinstitute.org

Like most of the other houses of the Province, the Priory also hosts the local Lay Dominican chapter: http://www.laydominicans.org.uk
Last, but not least the Priory is home to two cats, one of whom can lay claim to being Edinburgh’s most famous cat. Unlike the friars, and despite permanently wearing his black and white habit, he is not particularly evangelical and keeps his Dominican name and identity secret. However, appropriately enough for a Dominican cat, he is often to be found in the University Library philosophising, where he goes by the name of Library Cat. Perhaps to the chagrin of those who provide a home and food to him, his facebook page has more followers than any other member of the Priory: https://www.facebook.com/pages/Library-Cat/1425194534381693?ref=br_tf
Top image: St Albert’s Priory as viewed from George Square, Edinburgh
Categories:
Dominican Priories