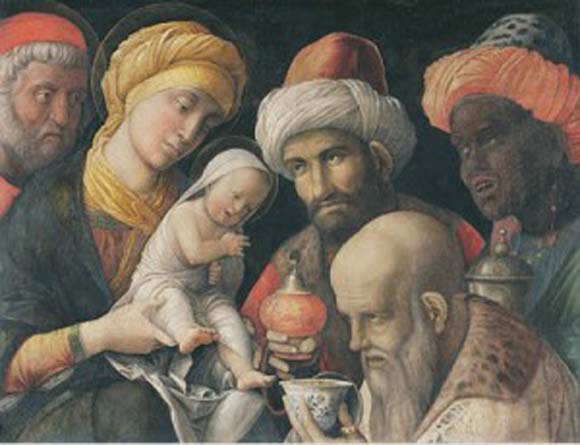 Epiphany of the Lord

This year Epiphany was celebrated in many places on Sunday 3 January but elsewhere it is still celebrated on its proper day, 6 January. Here is a reflection for this great feast written by fr Gregory Murphy OP, a founder member of

Godzdogz now ministering as a deacon at St Dominic’s Priory, London. It first appeared in The Pastoral Review for January/February 2008.

Matthew’s exotic visitors from the East bearing gifts caught Christian imagination early. The depictions of the Magi in the Roman catacombs predate those of Luke’s shepherds by about two hundred years. The name seems originally to have meant someone belonging to a Persian priestly caste, but its usage had become broadened by the time of the evangelists to designate not only theologians, philosophers, and astronomers but also astrologers, sorcerers and charlatans from the pagan cultures to the East of Israel. However, Matthew does not sketch the Magi negatively. They are wise and pious Gentiles who from the beginning seek what is right, to worship the child Jesus.

‘Magi’ is probably best left untranslated: they were not kings; ‘wise men’ is too generic; and ‘astrologers’ probably too confusing to people today. Matthew, in fact, subtly deflects attention away from astrology by not indicating how the Magi recognised the significance of the star: it is enough that they were guided by God. It is true that there was a prevailing idea in antiquity that the births and deaths of great figures be accompanied by astral phenomena, and much ink has been spilt on various interpretations of the new star. This mistakenly conflates biblical and astronomical languages: a more plausible interpretation is that the “star at its rising” refers to the narrative of Balaam in the Book of Numbers. Balaam was summoned from the East by the Moabite king to put a curse on Israel; instead he foretold the future greatness of Israel, when “a star will come forth from Jacob”. The echoes of the Balaam story would remind the reader familiar with the Bible that already in the Old Testament God had revealed his salvific intent to gentiles. But this revelation, based on natural knowledge (the star), is imperfect: while it tells them of the birth, it does not tell them where to find the King of the Jews.

That is contained in the revelation of God to Israel, in the Scriptures. The Magi’s role as prefiguring the acceptance of Gentiles into the Christian community points towards the universal character of the gospel: it is to be shared by all, as Matthew will remind us in the great commission at its close.