First Sunday of Advent – Being Ready for the End

Beginnings are an ideal time to think about ends. After all, if we are setting out on something new, we need to know where we are headed. Now the first Sunday of Advent marks the beginning of the new liturgical year and as we begin the new year, the Church invites us to think about the future. We look forward to a time when there will no longer be wars, a time of salvation, a time when the Son of Man will come.
The final coming of Christ is something that we can easily lose sight of. Some theologians believe that when Christ talked in apocalyptic terms, he was just using the language of a first century Jew. They argue that Jesus wasn’t really talking about the end of the world, but rather he was just emphasising what the demands of Christian discipleship are. That is, we must constantly remain alert. In this realized eschatology, there is no need to focus on the end times, because the end has already happened. Christ has already come and he is with us now.
Of course Christ is truly with us and so we are living in the end times, but if we over-emphasise this realized eschatology, there is a real danger that we will go against what the Church has always taught. Every week in the Creed we proclaim ‘He will come again in glory to judge the living and the dead … We look for the resurrection of the dead and the life of the world to come.’ This will be a marvelous and miraculous event. It is not something we can deduce by studying the laws of physics. There is no way we can predict when it will happen or what it will be like, but our faith in Christ’s resurrection demands that we believe in a general resurrection which will be a corporeal reality. This is something we have to be ready for. A human soul can only be perfected if it is united to a body, so we can’t attain our final happiness as immaterial beings or as material beings which are subject to decay. Our faith in Christ means that we really can hope for a true and final happiness with God in which body and soul will be perfectly united.
So how should we be ready? Well, we need to come to terms with what we are. In today’s reading, St Paul gives examples of certain types of behaviour which are unbecoming of human beings: reveling and drunkenness, debauchery and licentiousness, quarreling and jealousy. It is not that the Christian life means we can’t enjoy ourselves, but rather our true joy cannot consist in these sorts of behaviour. In each of the examples that St Paul gives, there is some kind of contradiction with our true human nature. Getting drunk is damaging to our health and our judgement. Being licentious means our actions are not ordered to their proper end. Quarreling and jealousy undermine the social structures by which we discover who we are.
The big struggle in life is accepting our human nature, living as God intended us to live. We live in a fallen world, a world in which the spiritual is at war with the material, a world in which our souls are out of step with our bodies. We may see our bodies as letting us down, as an obstacle to our perception of reality, as tempting us do things we would rather not do. Yet we may also find ourselves being attracted to this fallen world and giving in to the unreasonable demands we feel our bodies are making of us. St Augustine understood this attraction very well. In book 8 of the Confessions, he writes about the period shortly before his conversion:

The burden of the world weighed me down with a sweet drowsiness such as commonly occurs during sleep. The thoughts with which I meditated about you were like the efforts of those who would like to get up but are overcome by deep sleep and sink back again. No one wants to be asleep all the time, and the sane judgement of everyone judges it better to be awake. Yet often a man defers shaking off sleep when his limbs are heavy with slumber. Although displeased with himself he is glad to take a bit longer, even when the time to get up has arrived. 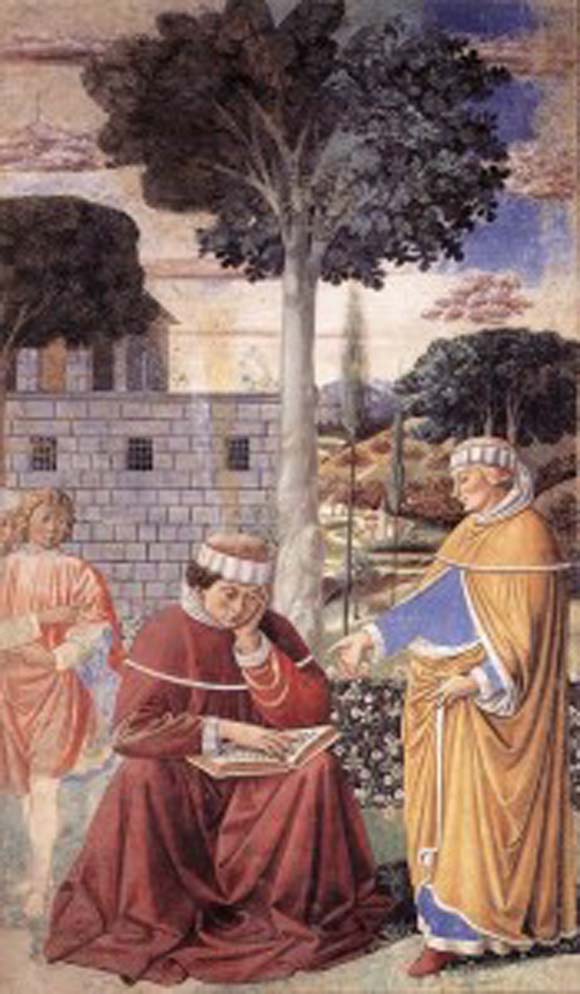 St Augustine goes on to describe the actual moment of his conversion, how he was in the depths of despair, weeping under a fig tree. At this point he heard the voice of a child from a nearby house repeating over and over again: ‘Pick up and read, pick up and read.’ He suddenly stopped crying, he hurried to pick up a bible, he opened it and read the first passage on which his eyes fell.

Not in reveling and drunkenness, not in debauchery and licentiousness, not in quarreling and jealousy. But put on the Lord Jesus Christ, and make no provision for the flesh, to gratify its desires.

The passage he read was the passage from St Paul, the one we heard in today’s reading. This was the moment of St Augustine’s conversion. On reading these words, he describes how at once it was as if a light of relief from all anxiety had flooded into his heart. All the shadows of doubt were dispelled. The story of Augustine’s conversion shows the dramatic power of the Word. Christ is with us now and he is our light. He heals our human nature and in him we will find our ultimate happiness.