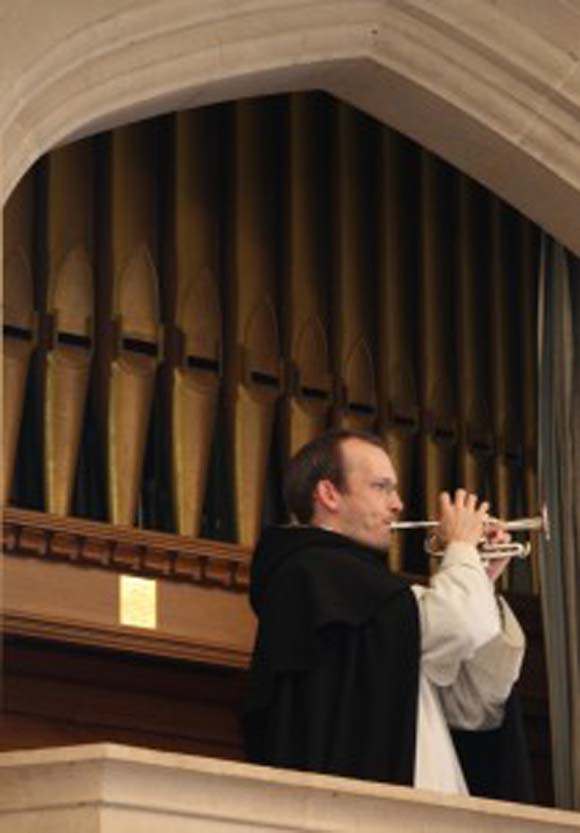 Friars’ Passions – 4 O Praise Him with Sound of Trumpet

The recent atheist advertising campaign with the slogan “God probably doesn’t exist. Now stop worrying and enjoy your life” seems to suggest that having faith in God is an obstacle to enjoying life. Clearly, someone has got the wrong end of the stick. One of the great joys in my life, something I am very passionate about is playing the trumpet. It never ceases to amaze me that by making a strange buzzing noise down a piece of metal tubing, it is possible to produce such a celestial sound.

I first started playing the trumpet when I was 10 years old, and from the age of 13, I started playing at church for special feasts such as Christmas and Easter. I’ve always felt a great honour in being allowed to praise God and glorify His name in this way.

From a young age, I’ve found the music of JS Bach very inspiring. Works such as the Magnificat, the Mass in B minor and the Christmas Oratorio contain so much joy. As I was growing up, I told myself that one day I would be able to play these pieces. I saved up my pocket money to buy a piccolo trumpet, but I remember the disappointment in discovering that this instrument didn’t make Bach instantly playable. The years went by, and I kept telling myself ‘maybe next year I’ll have the range and endurance to play the Christmas Oratorio.’

By the age of 26, several years before I’d joined the Dominicans, it was obvious I had reached a plateau – I was practising the trumpet between 2 and 3 hours a day, and I wasn’t getting any closer to playing Bach’s beautiful music. Was it just that I didn’t have the natural ability – were my lips or teeth the wrong shape? No. It was just that I had learnt to play in a way that was rather limiting. I’d reached a dead end. I came to this conclusion after reading about a trumpet player called Jerome Callet. He spent many years struggling to play the trumpet. He sought the advice of some of the best trumpet players in America, and they told him he didn’t have the natural ability. But undeterred, he experimented, he looked at photographs of great players, he listened to their sound, and he discovered that these players weren’t special in themselves, but rather, they were playing the trumpet in a special way, a technique Jerome Callet now teaches. Now I had read lots about all sorts of trumpet technique, and what Jerome Callet was suggesting was radically different from what everyone else was saying, but I found the hope that he was offering irresistible.
So I totally abandoned my old way of playing and tried this new method. It really was starting from scratch – I sounded like a 10 year old again. I had some lessons from Jerome but I found it so difficult to break my old habits. I spent 3 years in the wilderness, a time in which I felt a loss of confidence, a time I couldn’t even play the music I’d played in church as a 13 year old, never mind JS Bach. Then about 5 years ago, something suddenly clicked into place. I started to understand what Jerome had been trying to teach me. From that moment onwards I’ve made such a lot of progress, and I don’t even have to practise that hard – as a Dominican, it would be completely impossible to practise 3 hours a day. Here is a recording of me playing some of the music that inspired me during my childhood.

I haven’t performed these pieces in public yet, but I’d love to have the opportunity to play them in their proper liturgical setting.

The struggles I’ve had with playing the trumpet seem to mirror some of the struggles I’ve had with being a Catholic. Having to recognise there are times when I’m wrong, having to put aside whatever prevents me from flourishing, having to look to the lives of other people for inspiration. Some ways of doing things are better than others and human reason can help us to decide which. But there may also be times when we just have to let go of our ideological baggage and embrace something without fully understanding it. As Jesus says, ‘come and see’.