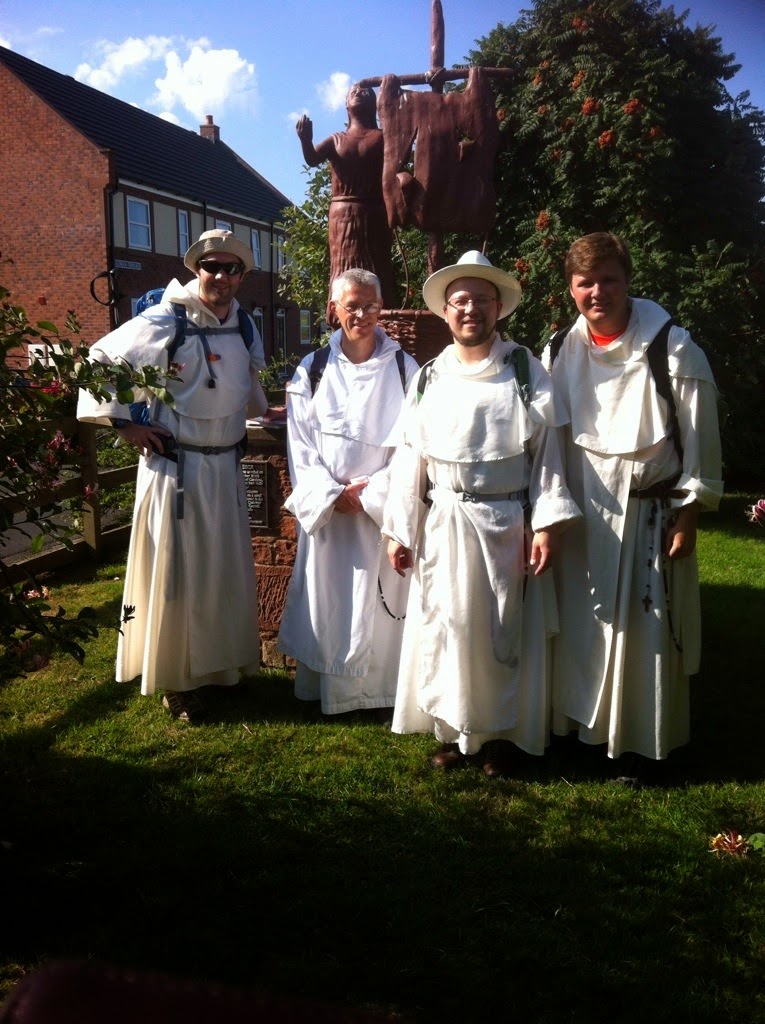 By Godzdogz Team
36
Many of you will be following the Friars’ Walk blog which is charting the progress of our four brothers walking Coast-to-Coast across England, including two members of the Godzdogz team.

You can now click the icon to the right of this page to reach that blog, or follow the link below:

Here’s a quick illustrated digest of what they’ve achieved so far….

Our Four walking Friars, two from Cambridge and two from Oxford, met at Carlisle at 2.30pm to take the Cumbrian Coast Line to Corkickle, which takes in some spectacular views over the Irish Sea to the West and Lakeland foothills to the East.

A hearty welcome awaited us at St. Begh’s, Whitehaven… Fr. Joseph Parkinson OSB and Deacon Stephen Scott received us at the Presbytery before allocating us to parishioners who, showing famous Northern hospitality, took us into their homes. Thank you to Sue, Sandra & Ian, and Roy. Special thanks also to Deacon Stephen for all his efforts in putting these arrangements together.

We met again for Mass at 6pm at St. Begh’s where Fr. Richard Finn OP preached on the significance and meaning of parables. He referred to the parable-like Dominican charism and our mission both generally and on this walk. After Mass, parishioners showed great generosity of spirit, wishing us well on our trek, and generously contributed to our fundraising efforts.

An auspicious day (St James is the patron saint of pilgrims) to start our Coast to Coast fundraising pilgrimage!

We pray for vocations, our fundraising efforts, and the intentions of our benefactors and friends. Today we also remember Iraqi Christians especially in our prayers.

DAY ONE: Arrived at Ennerdale Bridge 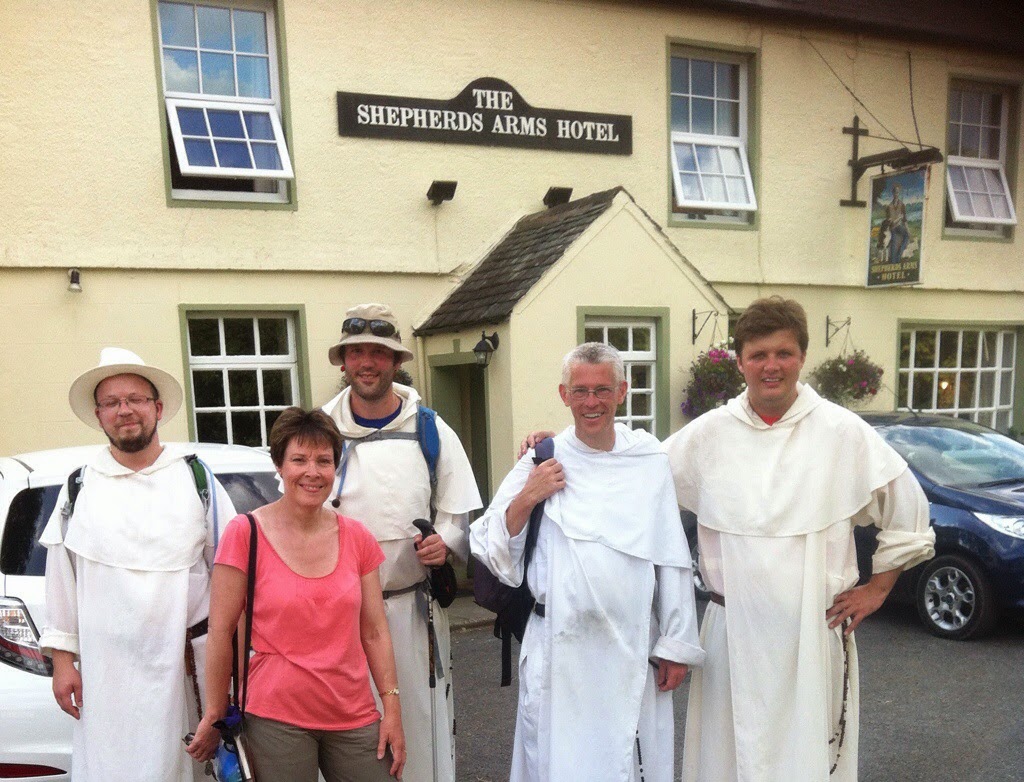 In the glorious Cumbrian sunshine, we reached today’s destination at Ennerdale Bridge! We were delighted to be joined by Mary Clarkson who was wonderful company!! We encourage others to join us if possible. Details here: https://mapsengine.google.com/map/edit?mid=zDj7ZFPT0-gc.kAbXsCg0_28Y

Our route today took us along the spectacular coastland from St. Bees to Whitehaven. …

In the afternoon we scaled Dent Fell, looking out over a West Cumberland to the West and the daunting fells that awaited us to the East. The views were spectacular. A steep descent from Dent brought us finally to Ennerdale Bridge.

On arriving at Ennerdale, we were taken back to Cleator by our invaluable support crew consisting of John and Sue Collins from our Cambridge Priory and Br. Andrew Brookes OP

Vespers, a shower, Dinner and a drink rounded off a very successful first day. Thanks be to God!! 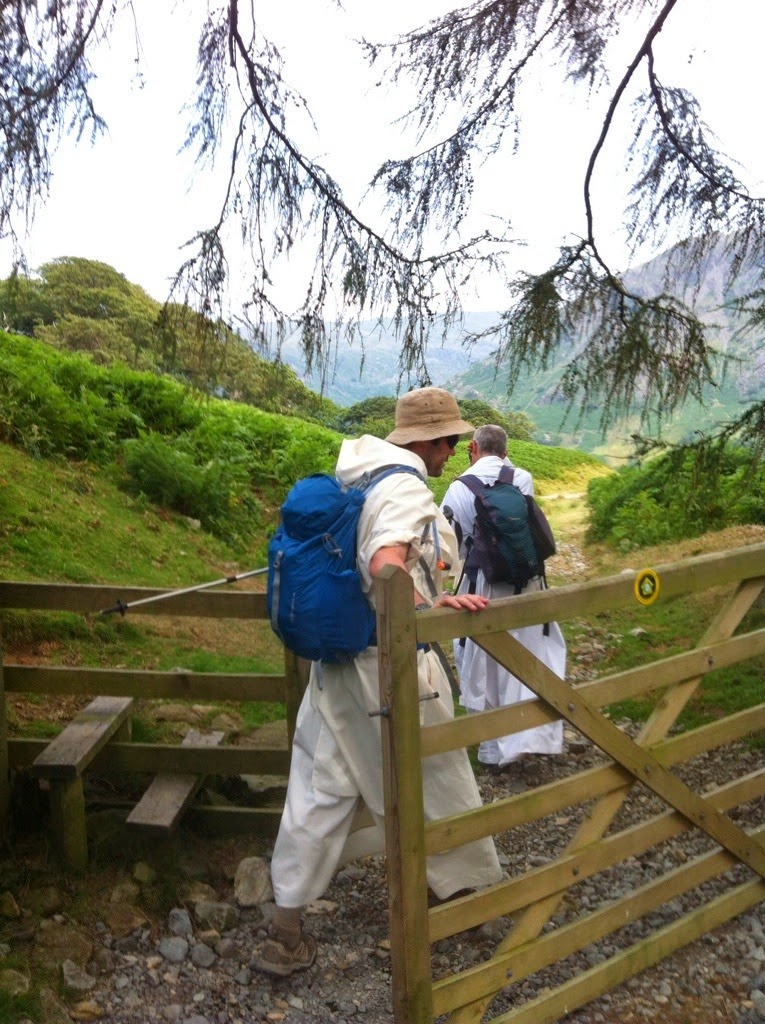 We contined to pray for the intentions of our benefactors and friends. The intentions entrusted to us, each of which is remembered at a decade of the Rosary, are often very grave. It was a comfort to us that we could pray for people who are facing all manner of difficulties; we hope it will be a comfort for them. …

Over the next 1/2 mile, we climbed 340m, as we took the steps up Loft Beck. We met Australians Sue and Elaine near the top. They were in their 70s, and doing the Coast to Coast walk for third time! They were in a spot of bother because the steps seem to disappear and Elaine couldn’t work out where to place her feet in a particularly demanding scramble up the mountain stream. When we reached the summit, after some help and encouragement, they reported that they were now quite convinced of the existance of Guardian Angels!!

Rosthwaite to Patterdale, via Grasmere 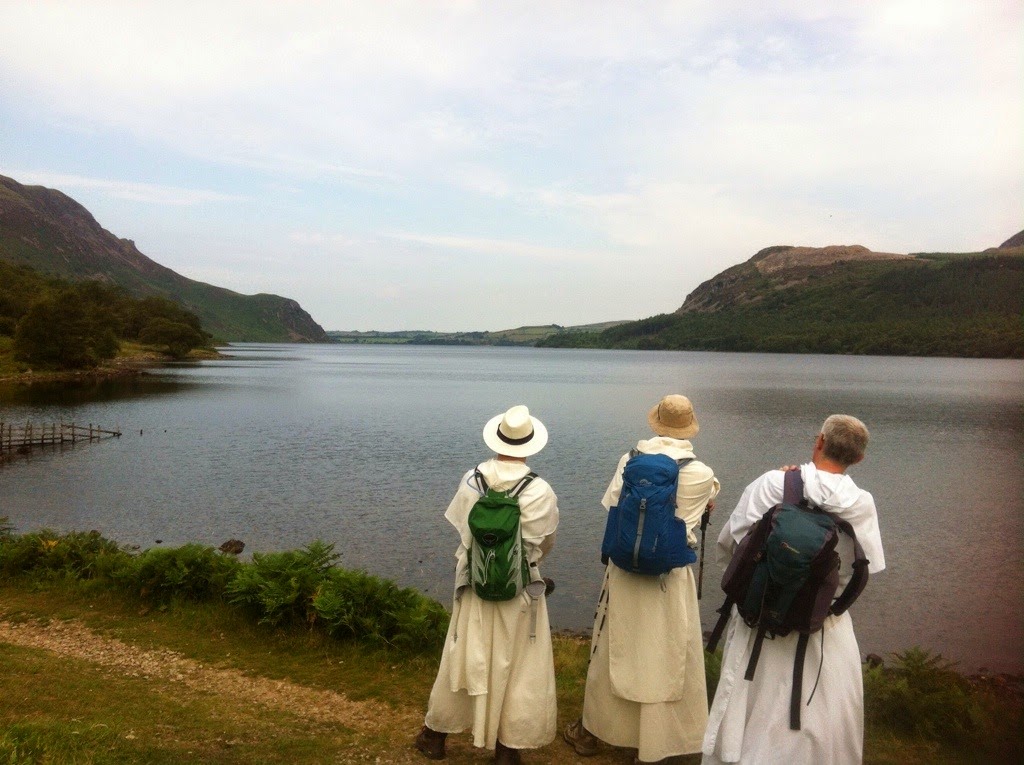 …This promised to be one of the most demanding days of walking before us, a walk of over 17 miles over some long and step climbs.

The first major ascent is Lining Crag, a glacier smoothed fell of some 1778 ft. Upon reaching the top, we were greeted by a wonderful belvedere, a sort of hidden valley within a valley.

We then descended into Far Easdale before continuing to the outskirts of Grasmere at Goody Bridge. After a hard morning’s walking, the team felt it entirely necessary (!) to avail ourselves of the opportunity for tea in one of Grasmere’s many tea shops.

After a welcome breather, we began the formidable climb up beside two fells known as the Lion and the Lamb. Then we came up the Tip of Great Tongue, before traversing to Grisedale Tarn, a lake at the top of the mountain with views of the Old Man of Conniston.

There followed a long and invigorating descent leading to the valley of Patterdale, named after St. Patrick. William Wordsworth’s poem Brothers Parting is carved in stone in the valley: the evocative poem describes the parting of Wordsworth and his brother, John. …

See here for some photos from the last couple of days.

After a night of camping at Takoma Campsite, and a bacon muffin, we prayed Lauds with Maria, our host. Fellow campers awoke to the chanting of the Benedictus, which must have been something of a surprise!

… we met a British couple, Dave and Jacqui, and an American couple, John and Caroline. We spoke about our mission and the walk, speaking over the strong winds, which blew across the valley. 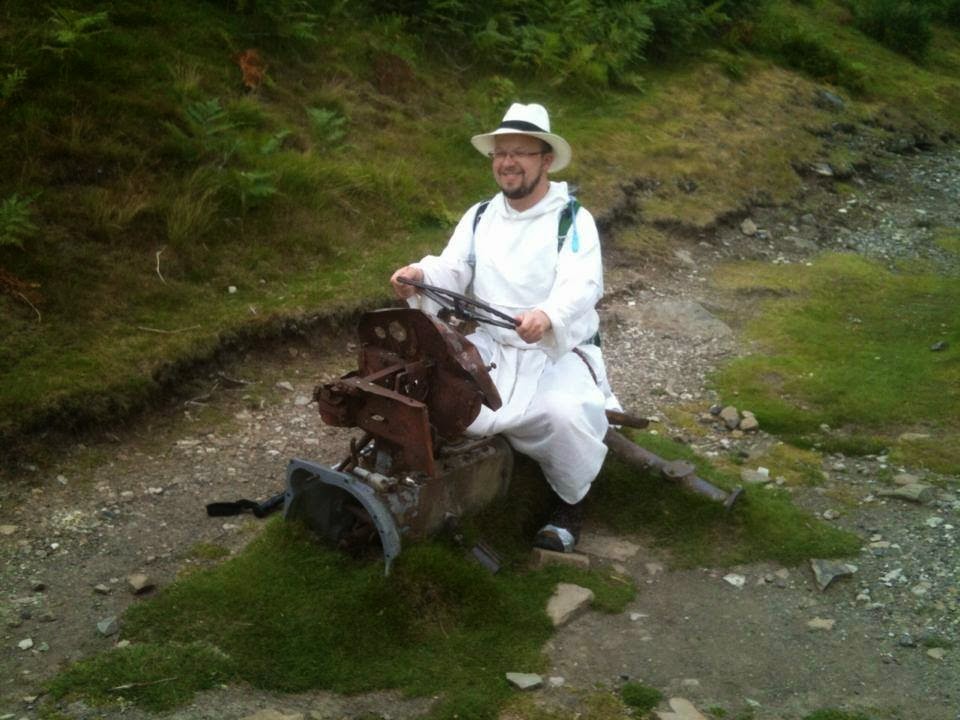 Our route continued across the boggy moorland, through the clouds. Once we emerged from the clouds, the views were impressive, if not somewhat bleak. As we came down from the higher ground, we stumbled across a wonderful farm at Ravenseat, which served that delightful English staple, “Cream Tea”. It would have been rude not to have availed oneself of the opportunity to sample such an idle pleasure.

We learnt that the remote farm was famous and had been the subject of television programmes and a book. During our short tea-time, we met some delightful friends including Denise Rowland a Catholic lady from Carlisle, with her friend Doris, and her granddaughter – also called Denise. One brother also made friends with Pippin, the farm hound.

When we arrived at the sleepy village of Keld, we discovered that our wonderful support team of John and Sue Collins had found Caroline (of the aforementioned American couple) injured by the roadside, and – playing the role of the Good Samaritan – conveyed her and her husband, John, to Keld by car.

Our support team then took us to St. Catherine’s Penrith where we spent the night. 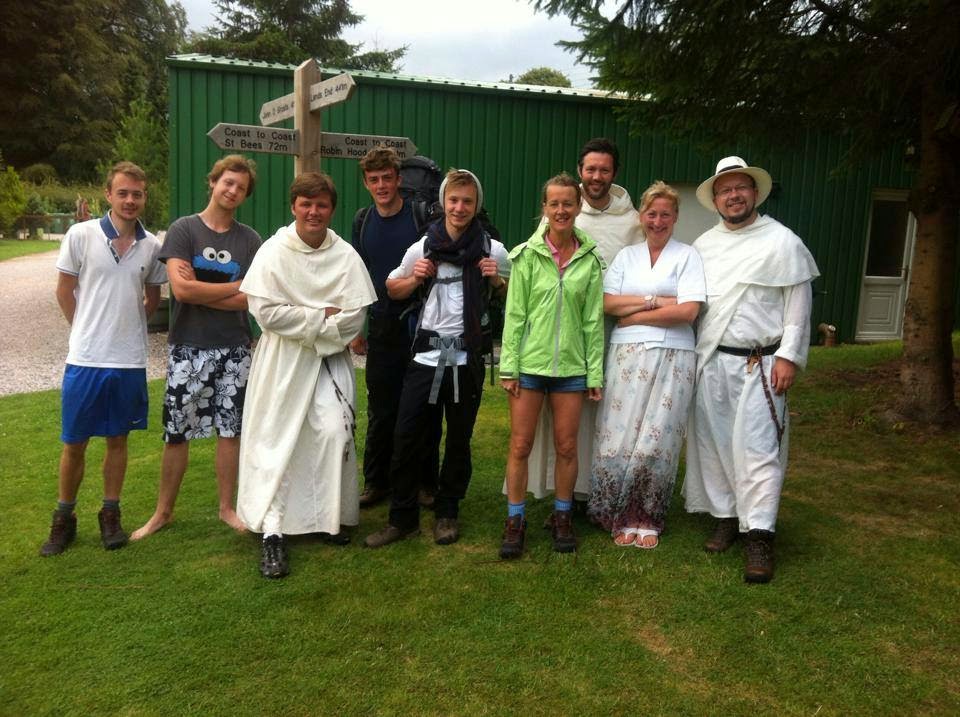 Today’s walk was a relatively easy stroll along the riverside through the Swaledale Valley from Keld to Reeth, covering just over 10 miles. Since we have not scheduled any rest days in our 12 day trek, a lighter day was a pleasant contrast to some of the more intense earlier legs through the Lakes. The landscape of the Yorkshire Dales, though similar, is altogether more gentle.

Just before we set off from the small village of Keld, a young chap approached us for a photograph. He said he had heard about some walking friars at the youth hostel where he was staying with a friend. His friend, however, had decided to take a rest day and not walk this particularly stretch. “Let’s have a photo so I can show my friend”, said the young chap, “he’ll be so jealous that he’s missed you!” Word is getting round, it seems!

…The gentle rolling hills, trickling streams, and dry stone walls made for a most pleasant walk. On the Feast of St. Ignatius of Loyola, that great Saint, one was reminded of verses from the hand of the Jesuit poet, Gerald Manley Hopkins “Glory be to God for dappled things..” 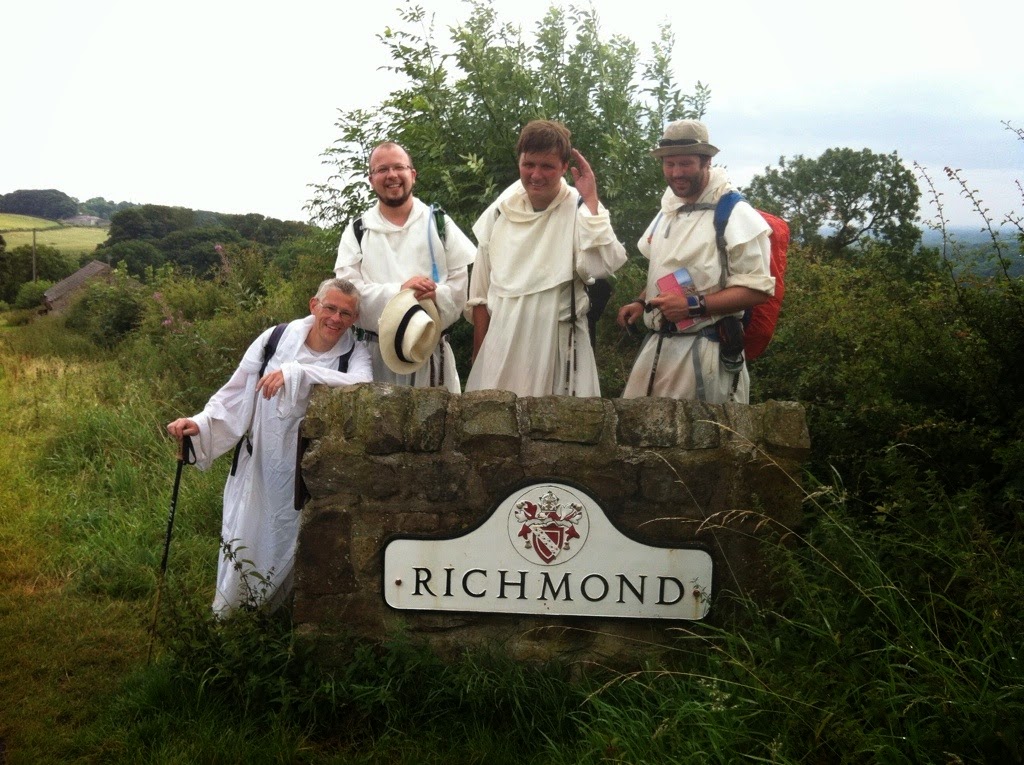 The day’s walk was much the same as yesterday in that we meandered through fields and countryside hamlets en route to Richmond. We stopped for Midday Office under the protection of a large tree as the rain came down around us.

Next, we continue to our overnight accommodation at Catterick Garrison.