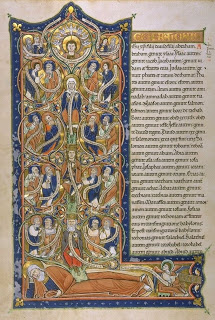 Over the last week, every Gospel reading in the lectionary has mentioned John the Baptist, and so it’s really been driven home the importance of John in understanding Jesus’ identity. As we approach the final week before Christmas, another essential factor concerning Jesus’ identity is highlighted – the genealogy. The genealogy of Christ in Matthew’s Gospel is much more than a list of names. Christ represents the culmination of salvation history.
Although Matthew neatly summarises Jesus’ genealogy in terms of three sets of fourteen, on closer inspection this genealogy is anything but neat. There are several aspects which seem rather troubling. There is little correlation between Matthew’s genealogy and Luke’s. Matthew emphasizes Jesus’ royal ancestry, but Luke only mentions King David. There are also noticeable discrepancies between Matthew’s genealogy and the book of Chronicles. At least three kings are missing who are present in Chronicles, Asa is misidentified as the psalmist Asaph, and Amon is misidentified as the prophet Amos. Four women are mentioned who were of rather dubious moral character. Why does Matthew mention these rather than more respectable figures like Sarah, Rebekah, and Leah? Another puzzle is that Matthew only mentions thirteen generations from the period of exile to the Messiah, rather than fourteen. What is the significance of the missing generation? These questions have been much debated by theologians.
But perhaps this all seems rather academic when we come to the final twist in the genealogy – it seems that it is not actually a genealogy of Jesus at all, but only extends as far as Joseph who is not Jesus’ true father. According to Palestinian law, the head of a family was no less a father of his adopted children than of those he had procreated, but does this fact really convince us of the relevance of Joseph’s family tree? Perhaps there is an important theological point to be made here. In the bible, there are several examples of births which are in some way miraculous. In the story of Abraham and Sarah, or Zechariah and Elizabeth, we see the generosity of God in giving offspring to His chosen people. This generosity is seen on a whole new level when God even more miraculously gives the child Jesus to Joseph. Through the genealogy, we see that Jesus is a gift to all of Abraham’s children. The fact that Joseph did not beget Jesus does not in any way lessen the deep bond between Joseph’s family and Jesus. Because through adoption Jesus Christ became fully incorporated into the human family, it is also possible for us to believe that through adoption we can be truly incorporated into the family of God.