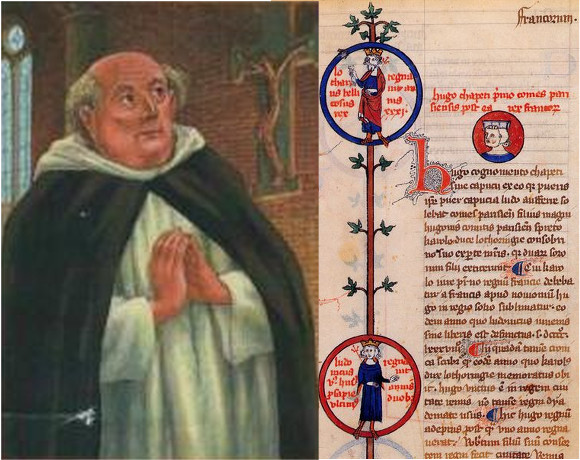 Bernard Gui, or Bernard Guidoni was born in 1261 in Royères, France, and is one of the more well known Dominican inquisitors.

At the age of 19, Bernard entered the Order of Preachers and was made the prior of Albi ten years later. In 1306, he was sent to Avignon where he performed administrative service and served on two papal diplomatic missions. Bernard wrote a number of historical and theological works, which are more indicative of his primary historical significance as an administrator and historian rather than as an inquisitor. However he is popularly known for his treatise on heresy, Practica Inquisitionis Heretice Pravitatis or “Conduct of the Inquisition into Heretical Wickedness” (due in part to his appearance in Umberto Eco’s The Name of the Rose) which contains instructions on the duties and rights of the inquisitor and how to approach the questioning of Manicheans, the Waldensians, the False Apostles, and the Beguines. Bernard was made bishop of Lodève, France in 1324, were he was noted for his energetic and skillful management. He died on December 30th 1331.

Modern scholars tend to view Bernard positively, as he reconciled many more people to the Church than he condemned. However, he does rank as one of the more zealous of inquisitors because Bernard viewed the inquisition as a kind of debate competition where the heretic is trying to conceal and hide his heresy, while the inquisitor is attempting to convince the audience that the heretic is merely putting on a show, trying to distract from their errors. This led to Bernard emphasizing the performative aspects of the inquisitor’s actions in an effort to win the hearts and minds of the audience (and hence the local community) so that they would stay loyal to the truth faith.