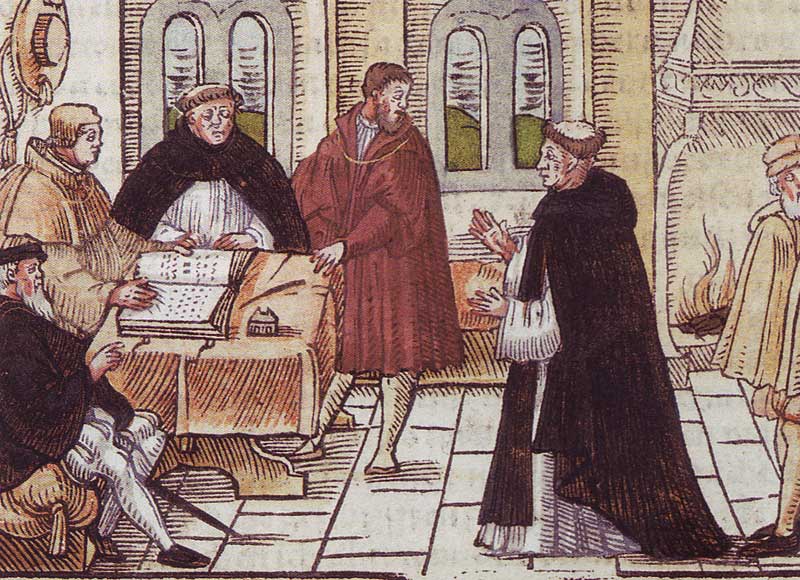 I know a few things about Cardinal Cajetan. Indeed, I know more about the sixteenth century Dominican philosopher and theologian than I do about many of the people I meet on a day to day basis including those I meet regularly. His name, birthday (20 February 1469), place of education, books he wrote, the philosophical and historical contributions he made with his life and the place and manner of his death are all things about which I know. And yet, despite the rich and informed picture I can paint of the Dominican cardinal, I do not know him. On the other hand, I do know the man who runs the local newsagent even though I don’t know where he was born or went to school and I don’t know what interests he has or what he actually does in his day to day life. Oddly enough, I seem to know Cajetan better than the shopkeeper even though I meet the shopkeeper all the time and I’ve never, unfortunately for me, met anyone from the sixteenth century.

In this mundane reflection lie a few features which, believe it or not, are live issues in the question of Thomas de Vio aka Cardinal Cajetan’s contribution to philosophy and the reception of St Thomas Aquinas by subsequent generations. When we raise the question of knowing more about people we do not know than people we do know we are beginning to enquire into the structures of Being. Not simply ‘to be or not to be’ but rather ‘what difference does it make?’ In this latter question there is no indifference towards the question of Being but rather it is earnestly asked: what is the difference that Being makes? If someone asks ‘what do you know’ or ‘how do you know’ there inevitably follows a list of facts. In the case of Cajetan and the shopkeeper I am going to produce a much longer list for the former than the latter. However, in saying lots of things about the two figures, I haven’t even begun to address the question of the difference Being makes.

Anyone who is familiar with the distinction between Being and Essence (That-Something-Is versus What-Something-Is) might begin to wonder if, when we speak of knowing the shopkeeper but not Cajetan, we are actually talking about knowing Being, or encountering the Presence of Being. Indeed we might suppose that in the case of Cajetan we have concentrated not on Being but on something similar to Essence: we know what the Cardinal ‘is’ but we don’t know that he is. Cardinal Cajetan might turn out to be like King Arthur: a mythical figure. On the other hand, the shopkeeper might turn out never to have owned a shop at all, and his proprietorship to be an elaborate ruse. But that he existed is not in question. Somewhere in this interchange between “knowing Cajetan” and “knowing the shopkeeper” we begin to intuit the difference between knowing an Essence and encountering Being.

The second thing to come out of our initial problematique is a controversial question over the nature of knowledge. Is knowledge merely the holding of a long series of (true) propositions or is it something more than that? I can know everything under the sun about Cardinal Cajetan but until I actually meet him I can never really say I know him. Knowing then seems to be a kind of living relationship between the knower and the known.

This vision of knowledge is something I think St. Thomas would agree with and, it seems to me, Cajetan would too. However, it also seems that since the mid twentieth century poor Cardinal Cajetan has been somewhat vilified for having rendered Thomistic philosophy too propositional and ‘Essentialist’. The charge is that Cajetan led his successors to abandon the richer depths of Thomas’s thought which make it not just true in a trivial or tautological sense but give it a power to move and shake its students. This isn’t to say that someone like Gilson thinks Cajetan makes Thomas’s philosophy “boring” but rather, far worse, he is accused of making it irrelevant and unhelpful.

Of course, Cajetan lived in a turbulent time and he was a leading Churchman in the response to Martin Luther’s petty protestations. It would not be surprising therefore to find him interested in establishing clear definitions and propositions in his work which allowed him, and the Church, to identify points of disagreement and from there have a coherent debate. However, one shouldn’t push all this too far: the debate between Luther and the Church was not a debate about thesis qua thesis but rather thesis as expressions of the True and Living Faith. The Dominican and Augustinian interlocutors were deeply, passionately and personally invested in the things they talked about, even if they sometimes resorted to less than passionate technical terminology.

In this latter question, which we can call Cajetan’s call to Orthodoxy, we might find a moral imperative for us today. Since knowing is a relationship with a “living” thing we have a peculiar kind of duty to that thing: in our holding knowledge we should not “kill” that which we know by reducing it to a cold proposition but rather it must continue to live in us. This is to say, we should really learn the shopkeeper’s name.