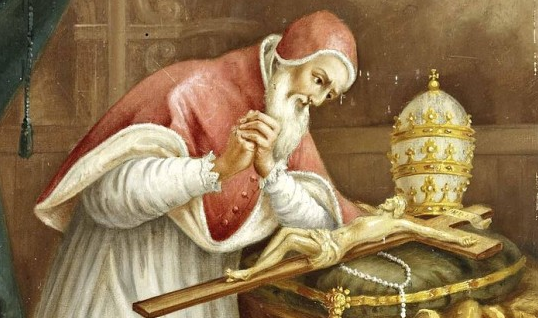 St Pius V reigned from the Chair of St Peter for six years (1566-1572) during a period of remarkable social, political and religious upheaval, both for the Church itself and the wider world. The impact of the Protestant Reformation was still being felt, the reforms of the Council of Trent had to be enacted and war in Europe was made all the more perilous by the expansion of the Islamic Caliphate to the east.

Pius did not become pope a stranger to these kinds of difficulties. Born in 1504, he grew up as a poor shepherd-boy in a tiny country town, which, returning to it later in life, he found utterly destroyed by a marauding French army.

Attracted to the charism of St Dominic he joined the Dominican Order and served as an inquisitor, an institution he belonged to for the rest of his life. Like the shepherd he had been in his youth, he lived on the precarious edge of the flock, guarding it from the wolves of heresy. However, standing at the peripheries he also stood witness to the violent transition of an old world becoming something new as the tectonic plates of the mediaeval crashed against those of the modern era to come.

It’s hard to imagine what living in such a time felt like but Pope Pius tells us that he faced the difficulties of his world through prayer. It was prayer, he wrote, above all else that allowed St Dominic to found his order. It was prayer, he taught, that conquered the sufferings of this vale of tears. Indeed so confident was he in the power of prayer that after the Battle of Lepanto, when the vastly outnumbered Catholic fleet overcame invading Turkish forces, Pius proclaimed that the miraculous victory belonged to the intercession of the Blessed Virgin Mary and all those who had joined him in unceasingly praying the rosary for victory as the battle ensued.
Pius’ prayer life was complemented and formed by a strict personal asceticism, a discipline which, as pope, he sought to impose on the wider Church. No wonder then that throughout his life he was at times deeply unpopular whilst at others considered the font of great joys. From his death he has remembered as both terror and saint.

A study of Pius’ life reveals a man of seeming contradictions and if we are to understand him then perhaps should look to his favourite devotion: Christ crucified. St Pius is often painted gazing devotedly upon the crucifix, eagerly longing to be united with Jesus’ sufferings. Of course, the image of the crucifixion itself can be a difficult and troubling thing: how does the scene of violence and murder foster our love and increase our hope? We answer that it is because at the moment of the apparent defeat of the Cross, when Jesus was disfigured and despoiled, he poured out the infinite depths of his love for the Father and us into the world. The greatest love is magnified by the ugliest of scenes.

Pius V, remembered for his strictness and harshness was nonetheless also a man filled with love for God and his neighbour. His was an imperfect imitation but nonetheless in striving after Christ and him crucified he shared in the victory that God gives freely to those who call out to him, no matter how strong or weak, good or bad they may be.