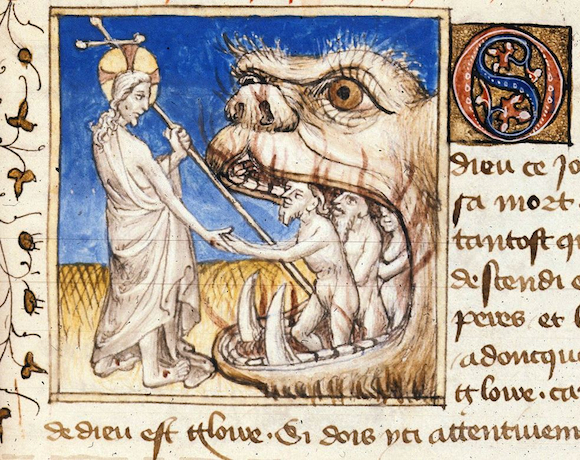 Holy Saturday – The Harrowing of Hell

By Br Thomas Thérèse Mannion | It is common to think of Holy Saturday as the great silence. The pregnant pause after the traumatic events of Good Friday and before the ecstasy of the Resurrection. Holy Saturday is not merely a peaceful, quiet time where we see the reign of the tomb but a time of hidden explosive action. On Holy Saturday we remember the harrowing of Hell.

It is common to think of Holy Saturday as the great silence. The pregnant pause after the traumatic events of Good Friday and before the ecstasy of the Resurrection. Holy Saturday is not merely a peaceful, quiet time where we see the reign of the tomb but a time of hidden explosive action. On Holy Saturday we remember the harrowing of Hell. The communion of the saints once again comes to the fore as Jesus brings light to those in darkness and those who dwell in the shadow of death. As foreshadowed by Zechariah ‘As for you also, because of the blood of my covenant with you, I will set your prisoners free from the waterless pit’. Of course Jesus reveals himself in the Gospel of John as the living water.

St. Thomas Aquinas reminds us not only did man incur death as a result of sin but also the descent into the underworld. Sin brings about a descent. Jesus then taking these things on himself being both fully human and fully God not only truly dies, he also truly descends. In this way Jesus experiences what every other human being before him experiences. The whole Christ descends, his divinity and his humanity.

Jesus descends to sheol, the place of the dead, preaching the Gospel for the salvation of souls, bringing the living water to those in the ‘waterless pit’. The people who walk in darkness see a great light. Jesus Christ reveals the face of the father to the prophets and patriarchs, they behold the fidelity of God in the person of Jesus Christ, who is the fulfilment of the fathers promise. His being is a powerful sermon, bringing humanity into full communion with the Trinity.

Jesus Christ unites all humanity to himself – all we need do is participate in his saving grace and we will participate in his inner life.
The omnipotence of God’s unrelenting love is revealed in this act of total solidarity with the human condition. He wants us to be totally united to him, the source of all true and lasting happiness, love itself, for all eternity.

There are some who have cried so much that they cannot cry anymore, the tears have dried up, they feel an emptiness. The sort of crying that is exhausting.

An electrifying ancient homily for Holy Saturday brings to life the moment spectacularly when Christ addresses those in the underworld with words of comfort and encouragement. We can understand these words both to those in the Sheol of those who have died and also to us when we have sinned or even when we grieve. In any situation his message is the same. I, your Lord and your God, love you. I have not abandoned you;

‘I command you: Awake, sleeper, I have not made you to be held a prisoner in the underworld. Arise from the dead; I am the life of the dead. Arise, O man, work of my hands, arise, you who were fashioned in my image. Rise, let us go hence; for you in me and I in you, together we are one undivided person.

For you, I your God became your son; for you, I the Master took on your form; that of slave; for you, I who am above the heavens came on earth and under the earth; for you, man, I became as a man without help, free among the dead; for you, who left a garden, I was handed over to Jews from a garden and crucified in a garden.

Look at the spittle on my face, which I received because of you, in order to restore you to that first divine inbreathing at creation. See the blows on my cheeks, which I accepted in order to refashion your distorted form to my own image.

See the scourging of my back, which I accepted in order to disperse the load of your sins which was laid upon your back. See my hands nailed to the tree for a good purpose, for you, who stretched out your hand to the tree for an evil one.

I slept on the cross and a sword pierced my side, for you, who slept in paradise and brought forth Eve from your side. My side healed the pain of your side; my sleep will release you from your sleep in Hades; my sword has checked the sword which was turned against you.

But arise, let us go hence. The enemy brought you out of the land of paradise; I will reinstate you, no longer in paradise, but on the throne of heaven. I denied you the tree of life, which was a figure, but now I myself am united to you, I who am life. I posted the cherubim to guard you as they would slaves; now I make the cherubim worship you as they would God.

The cherubim throne has been prepared, the bearers are ready and waiting, the bridal chamber is in order, the food is provided, the everlasting houses and rooms are in readiness; the treasures of good things have been opened; the kingdom of heaven has been prepared before the ages.’

To many the tomb is a sign of hopelessness and the abandonment of life, but it need not be. It is because of the descent into hell, as well as his incarnation, life and passion which proceeds it and the resurrection, apparitions and ascension which follows that the tomb is a reminder of Christ’s promise of future glory. Every tomb should remind us of the harrowing of hell and is an opportunity to make an act of faith in him, in his promise. At the Catholic Requiem Mass we say ‘for your servants Lord life is changed not ended’, how true this is. We need not abandon ourselves to a half lived life. The grace or free gift of God which comes through Jesus Christ in union with the Holy Spirit transforms areas of our life which are lifeless and makes them fruitful in many varied ways. Christ preaches to the dead in Sheol, he brings them to new life just as he does with us now. He descended to harrow hell for the prophets and patriarchs and he does not abandon us now either. Of course being made holy, being justified and being happy are works in progress but we have made a start with him (Ephesians 2:5 – ‘…by grace you have been saved…’, Philippians 2:12- ‘…now in my absence, work out your own salvation…’, Romans 13:11- ‘…salvation is nearer now than when we first believed…’). Return to the Lord in his sacraments and drink deeply from the water of life, Jesus Christ.