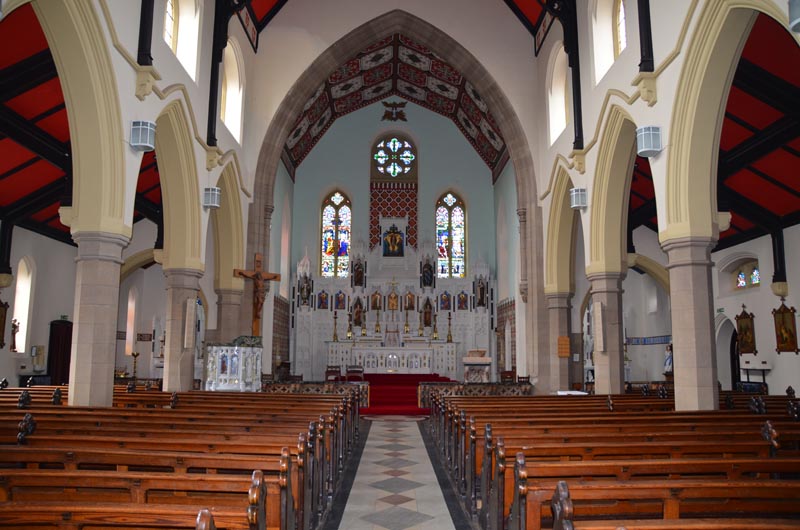 Our Holy Redeemer’s church was opened on October 12th 1903, and was the first dedicated Catholic church to open in the town of Clydebank, where I grew up. The construction of Our Holy Redeemer’s (OHR) was funded by the first Catholic settlers of Clydebank, and my own great grandparents would have been amongst them. I have always found OHR an interesting church because of the historical connection to my own family, as well as the historic importance of OHR church in the local area.

The architect of OHR church and presbytery was Peter Paul Pugin. He was the youngest son of the famous architect Ausustus Welby Pugin (who designed the Houses of Parliament in Westminster). Built using red ashlar-fronted sandstone, Our Holy Redeemer’s church in Clydebank is situated on the main Glasgow road on the banks of the River Clyde, standing out as a very distinctive old red building, amongst what is otherwise unimpressive scenery. 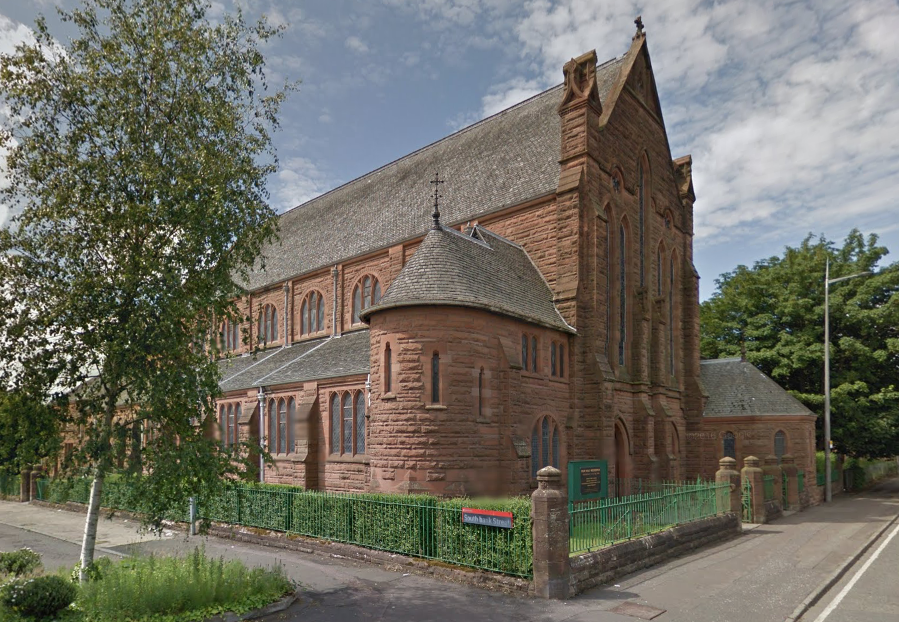 Originally, OHR was built to serve the growing Catholic population of Clydebank, many of whom would have worked in the nearby shipyards or the Singer’s sewing machine factory. Nowadays, the church lies almost directly underneath the Glasgow airport flight path and is adjacent to a modern industrial estate, as well as a fuel storage facility. The story of Our Holy Redeemer’s church, is one of a proud and pioneering Catholic community who financed the construction of a church from their own funds. But it is also a story of a community facing the odds, in sometimes very difficult situations. At the end of the 19th century, Catholics were marginalised in Scottish society. As a result, Catholic churches and schools were self-funded by the Church without state support, with the aim of preserving the Catholic faith in a Presbyterian Scotland. Churches such as Our Holy Redeemer’s and others built in central Scotland at a time of industrial expansion, would have been the bedrock of the Catholic community, as well as a centre for social life and family life. 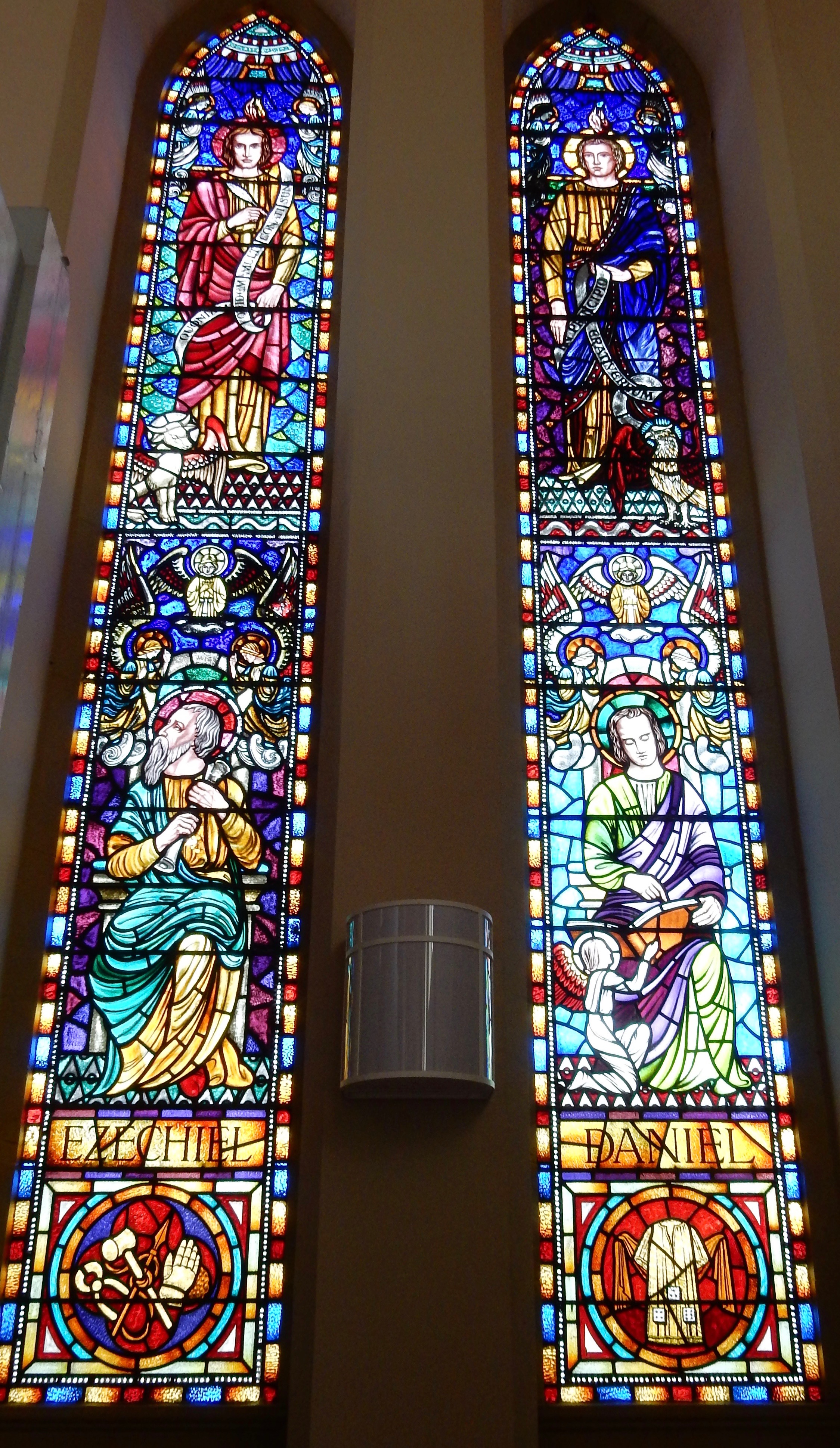 Above: A stained glass window of Our Holy Redeemer’s 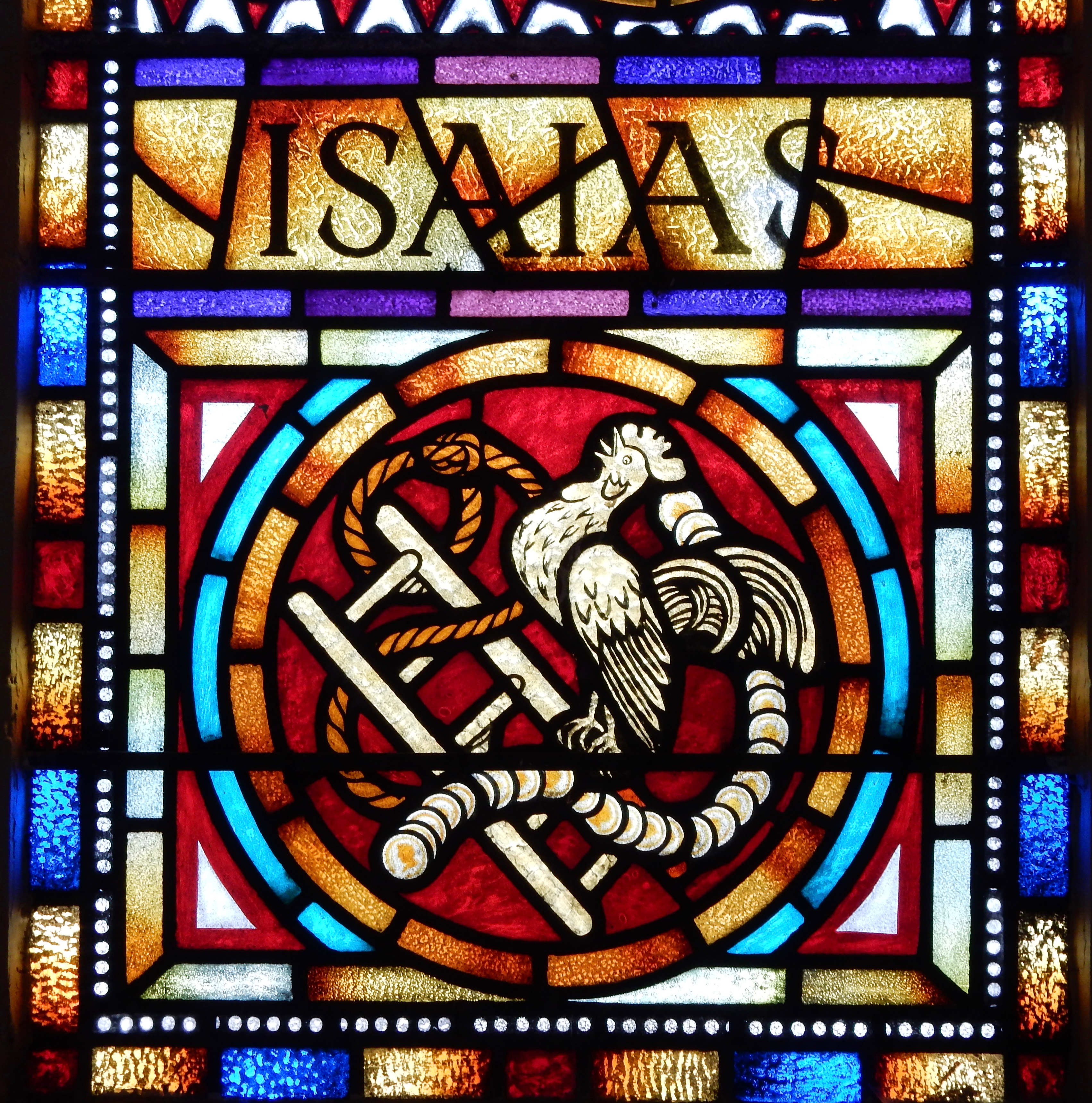 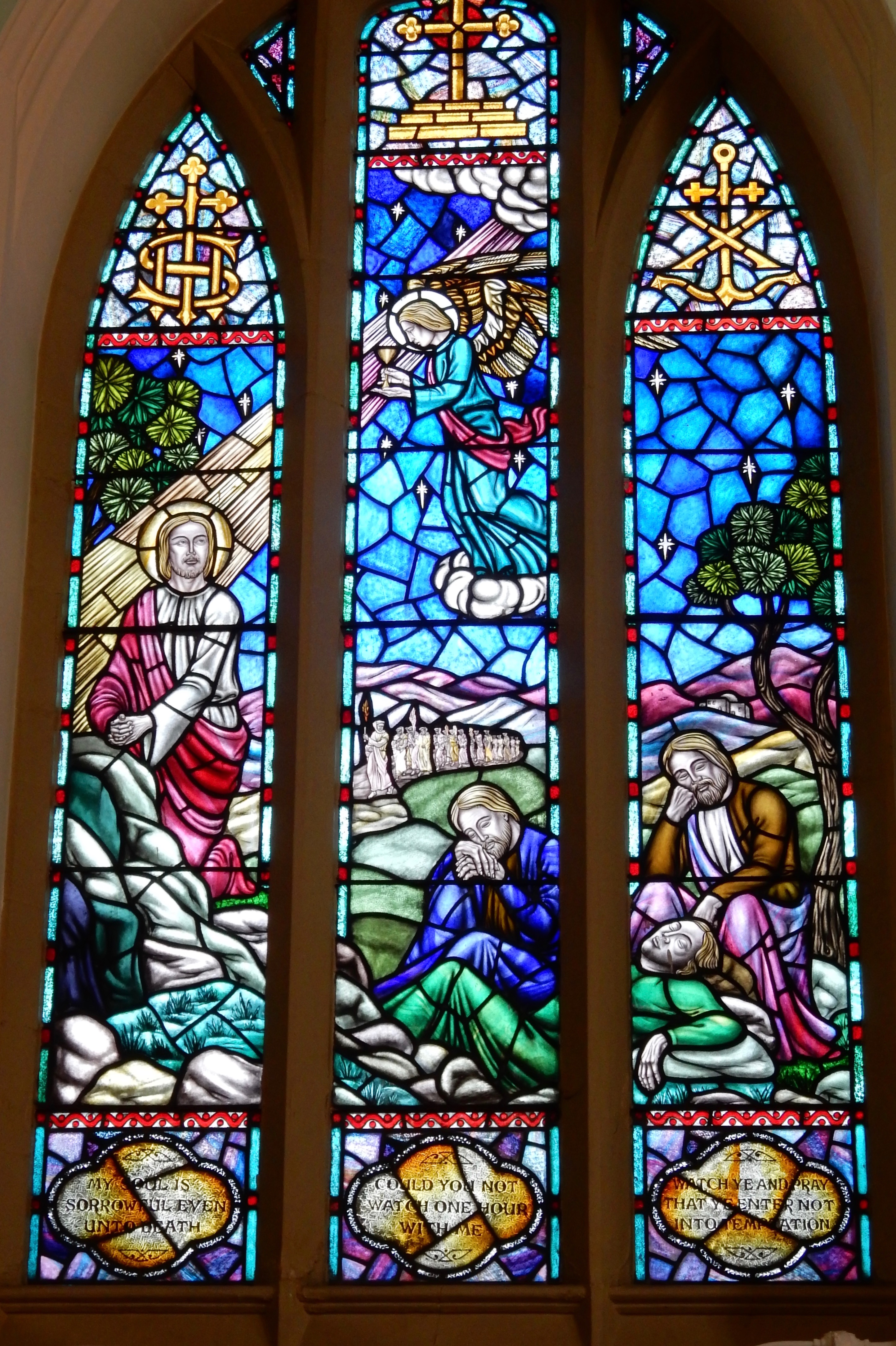 At the time of construction, there was no existing Church mission in the area. As a consequence, the parishioners were pioneers of the Catholic Church, and wanted an established architect to build them a church in a highly conventional style. Architectural experimentation was not on the agenda. As John Sanders noted*, Peter Paul Pugin had discovered a successful formula in that he provided what his clients wanted, but that no two churches were the same. There was always room for development and variation in his architectural output. There are several other churches designed by the Pugin sons in Scotland, which tend to be located in the areas where Catholics moved for employment in the late 19th century.

Above: A close-up image of one of the stained glass windows depicting the construction of OHR – notice the industries in the background
One feature of OHR is that it has no church tower. In order to produce a powerful impact and emphasise architectural beauty, the architect relied on the church’s vast size and an imposing street frontage to make an impression on those viewing the structure. 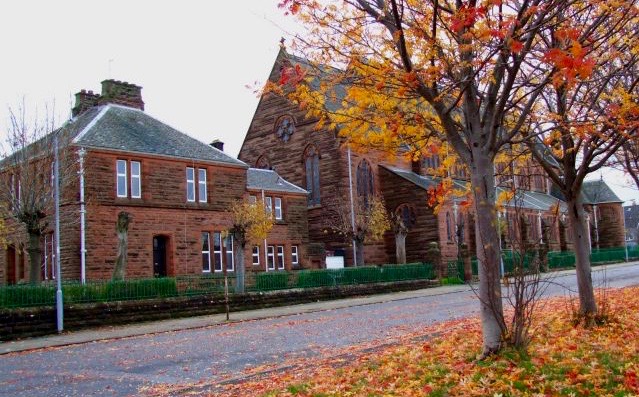 All of Peter Paul Pugin’s Scottish churches are in the Decorated Gothic style, except OHR which is in the Transitional Gothic style. This style of architecture is unique in Scotland. It incorporates Romanesque influence, but also introduces a unique French-Scottish style into the Pugin dynasty church architecture. 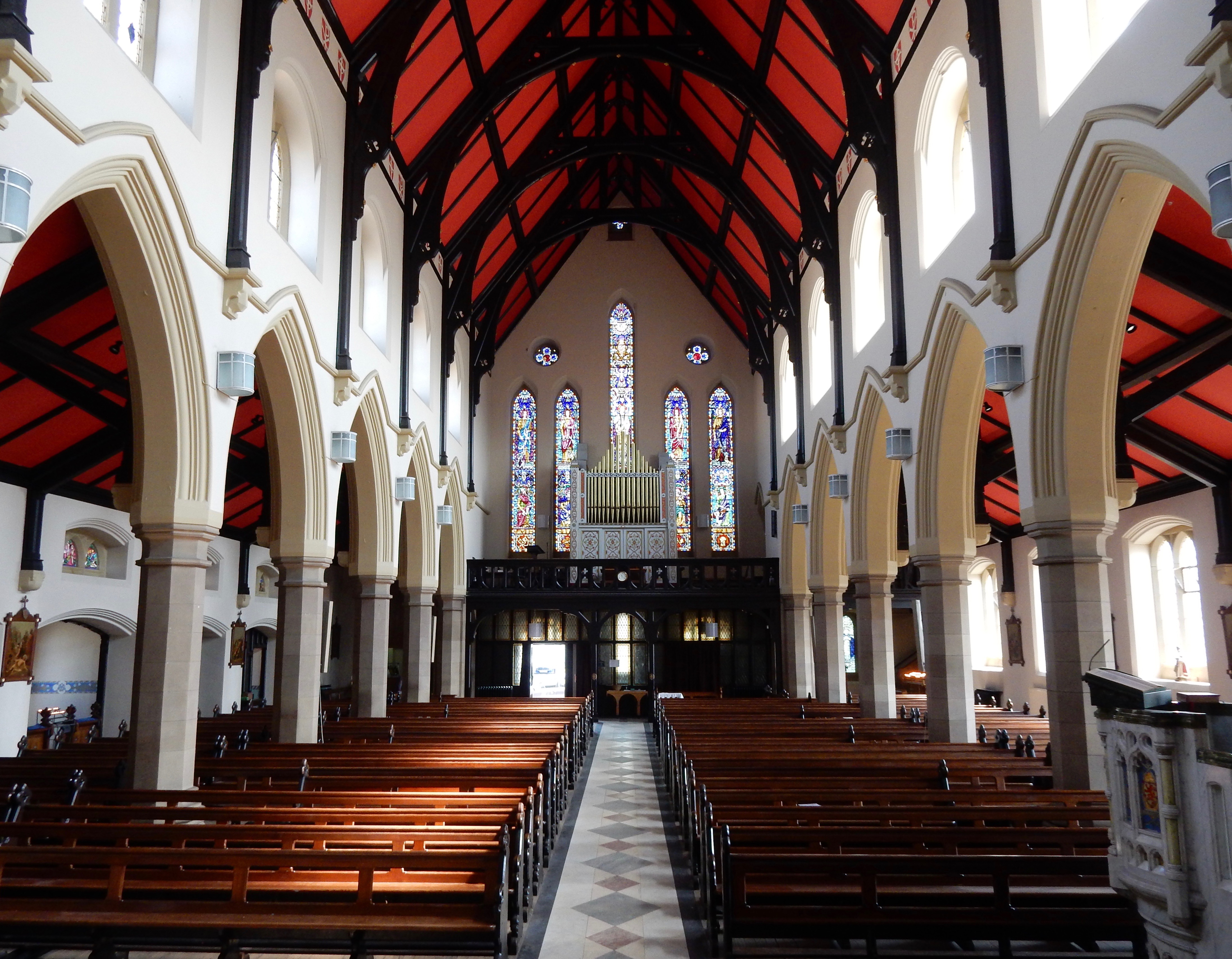 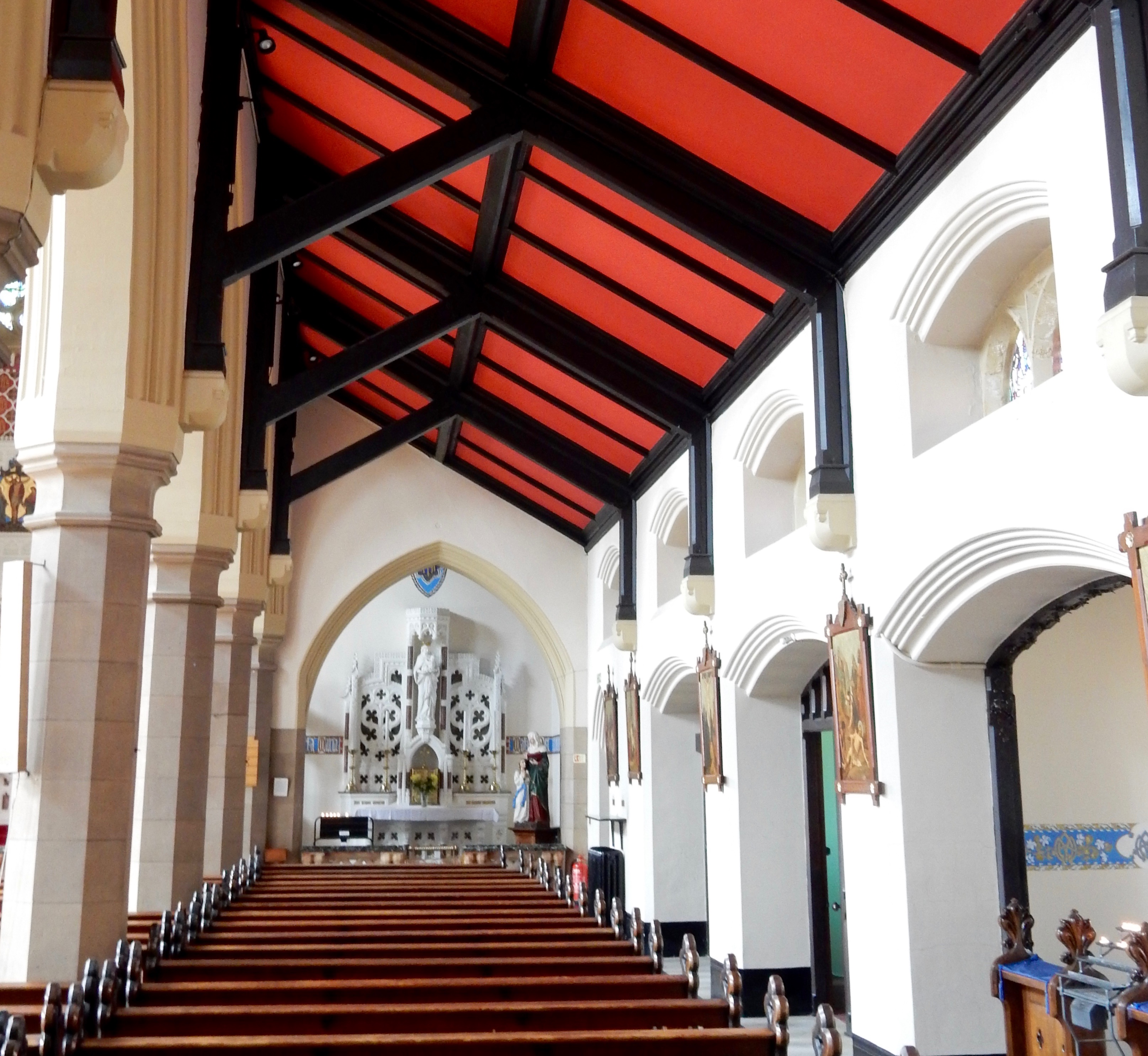 View of a side altar
As with other churches in the country, OHR has undergone improvements over time, including the installation of side altars, works done to the altar rails, installation of stained glass windows, and of course the impressive high altar. 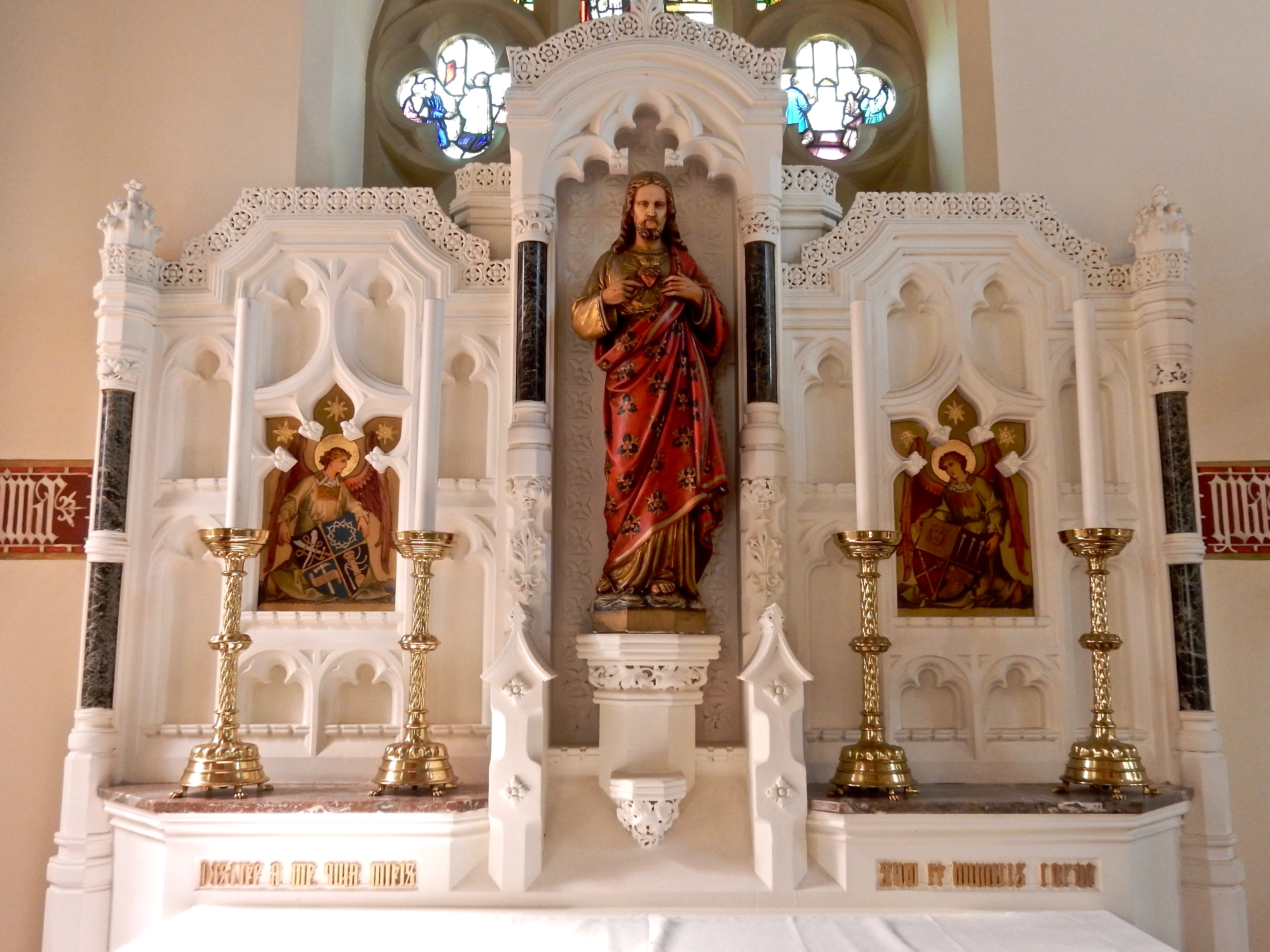 Image of the elaborate Sacred Heart side Altar
In 1997, OHR church had a refurbished organ installed in the organ loft. This is the only example of a church organ of its kind, originally built by Mirrlees of Glasgow. 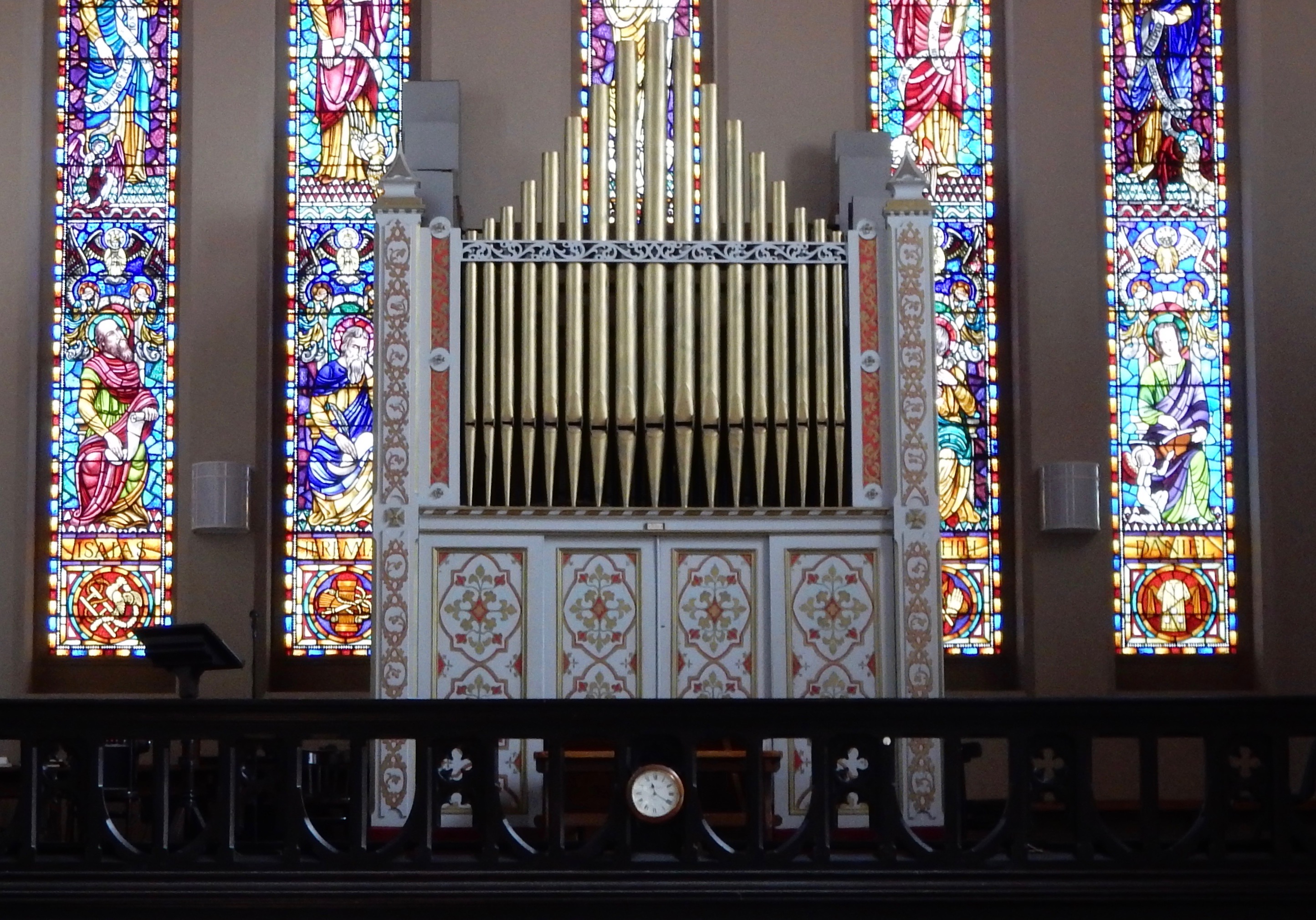 Unique church organ originally built by Mirrlees of Glasgow
The interior of Our Holy Redeemer’s has side chapels and a baptistery, with the main high altar of a distinctive and elaborate design. 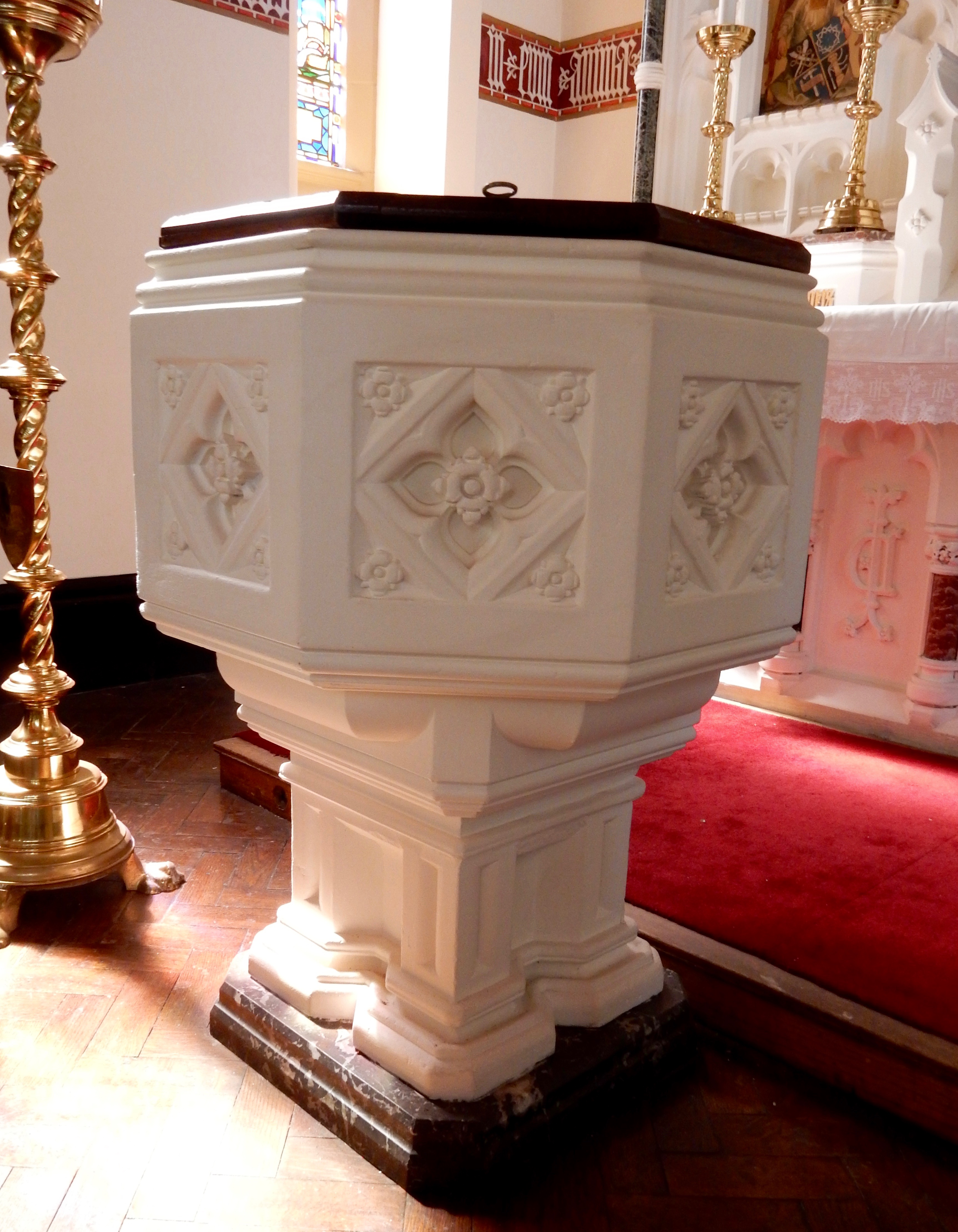 The baptistry and font, where many ‘Bankie’ residents have been Baptised
The reredos sculpted figures in OHR, built around 1930, give a distinctive Catholic identity to the church interior. This was probably the work of Sebastian Pugin Powell. This vast stone screen features an unusual amount of painting – done on wooden carved panels – including a Calvary, high above the altar. It also features two angels in an almost art deco style, with their gilded wings folded above their heads, on either side of the Exposition niche. 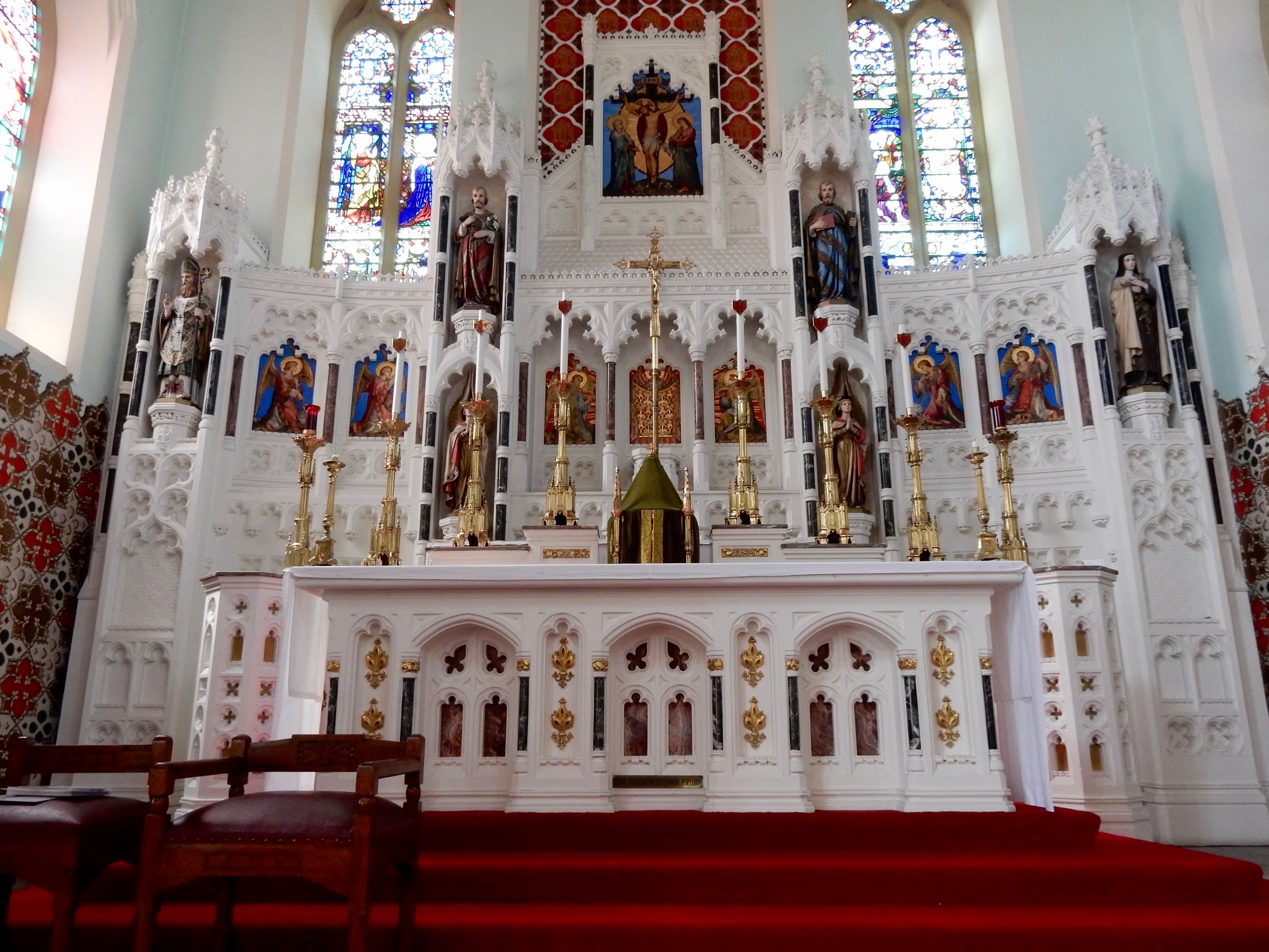 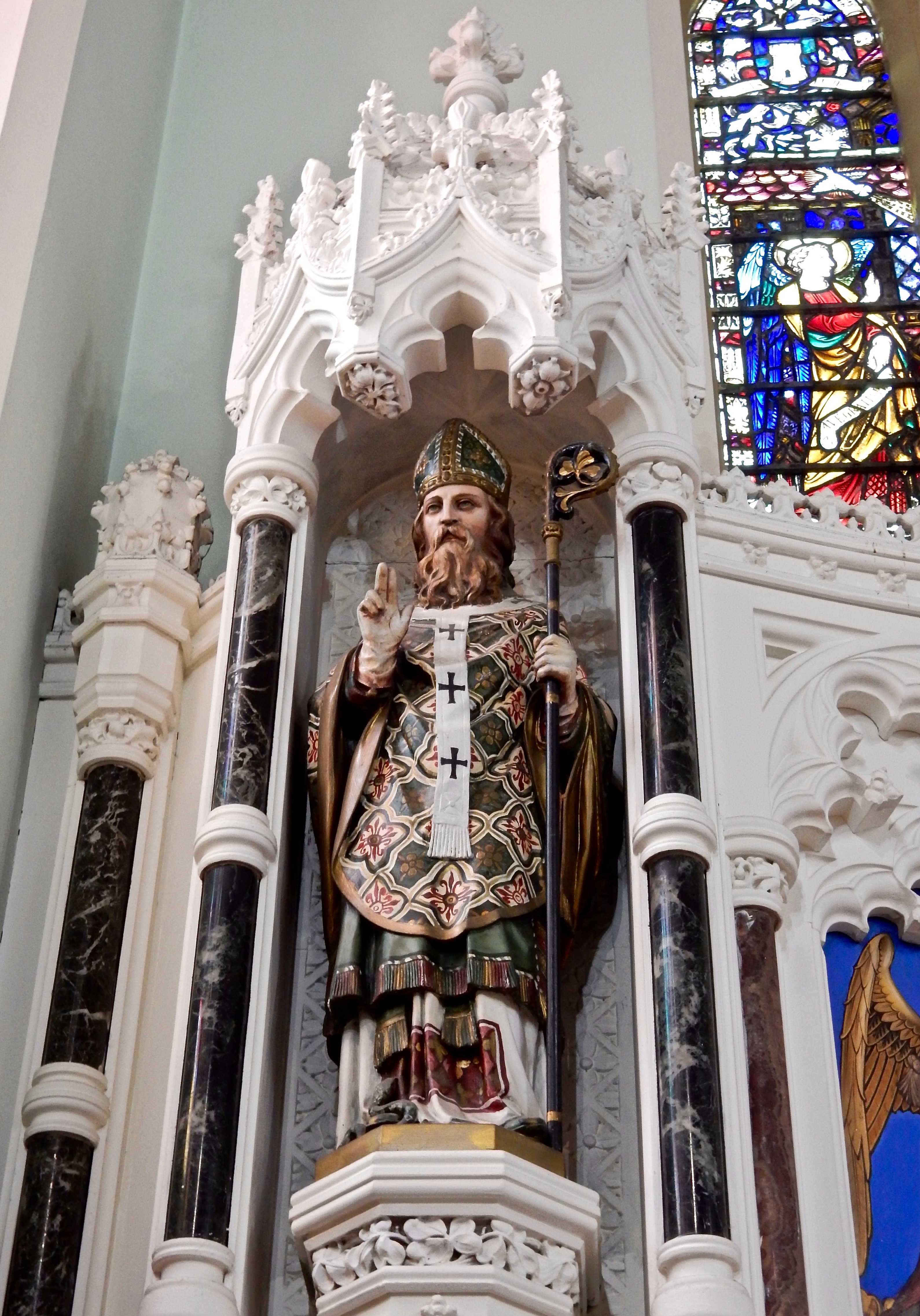 Above: Close up image of the sculpted figure of St Patrick at the high altar 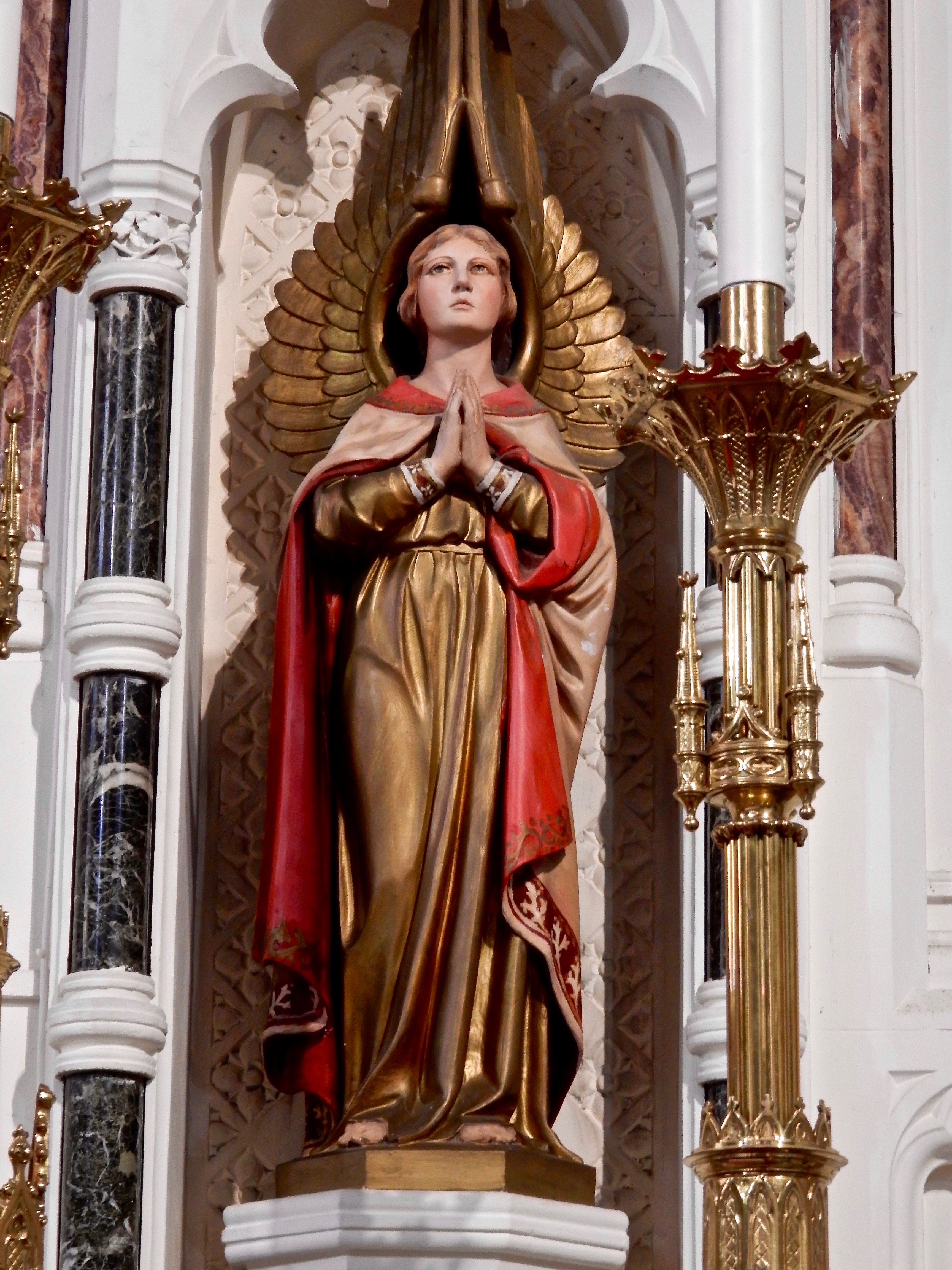 Above: closer image of St Michael the Archangel
The stations of the Cross were made by Morgari of Turin. The wooden shrine to the Madonna of Perpetual Succour was purchased from Rome. The interior that we see now is the result of decades of work done to the church after the church itself was built. Local historian Tom Logue, who has researched Our Holy Redeemer’s Clydebank, said, “It is astonishing that the Pugin churches in Glasgow were being designed and built the same time as the modernist architecture of Charles Rennie MacIntosh”. 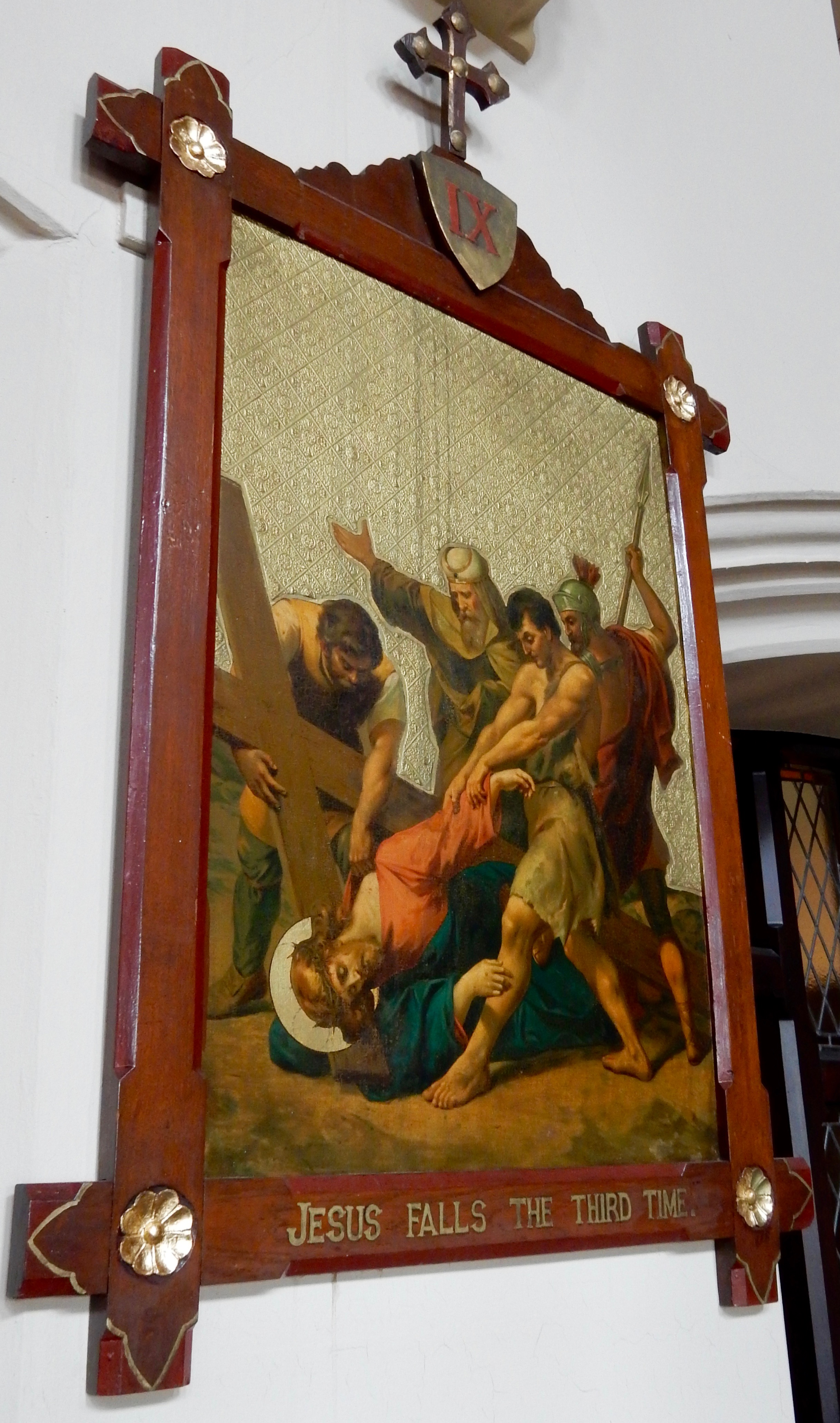 One of the stations of the cross
For me, OHR is an interesting church because it stands out as a beacon of the Catholic faith, and a church that has persisted despite the odds. Even with all the changes that have gone on around it, Our Holy Redeemer’s church has been there through the Clydebank rent strikes of the First World War, the General Strike of 1926, the depression era of the early 1930’s, and it narrowly survived being destroyed in the Clydebank blitz in 1941. 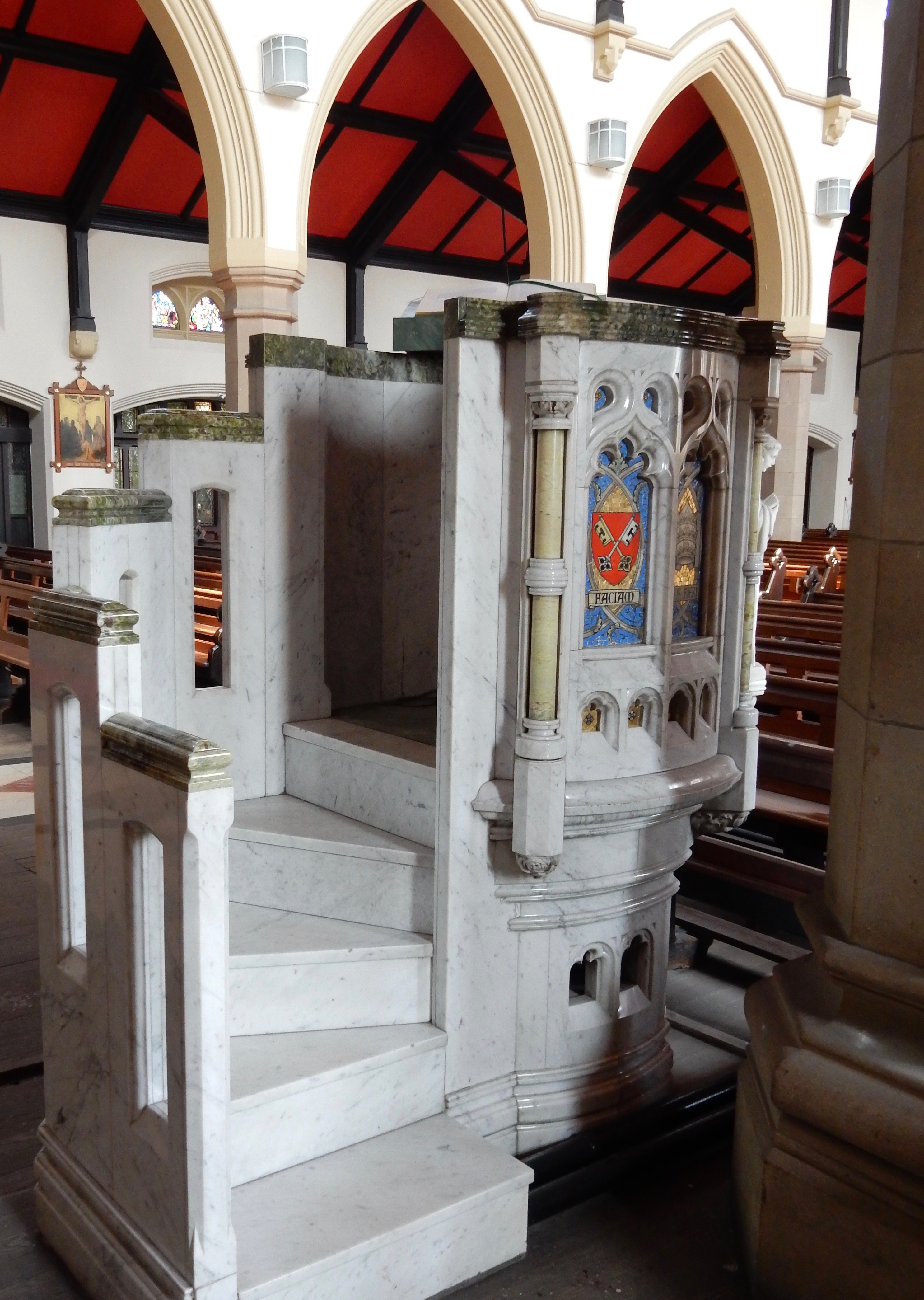 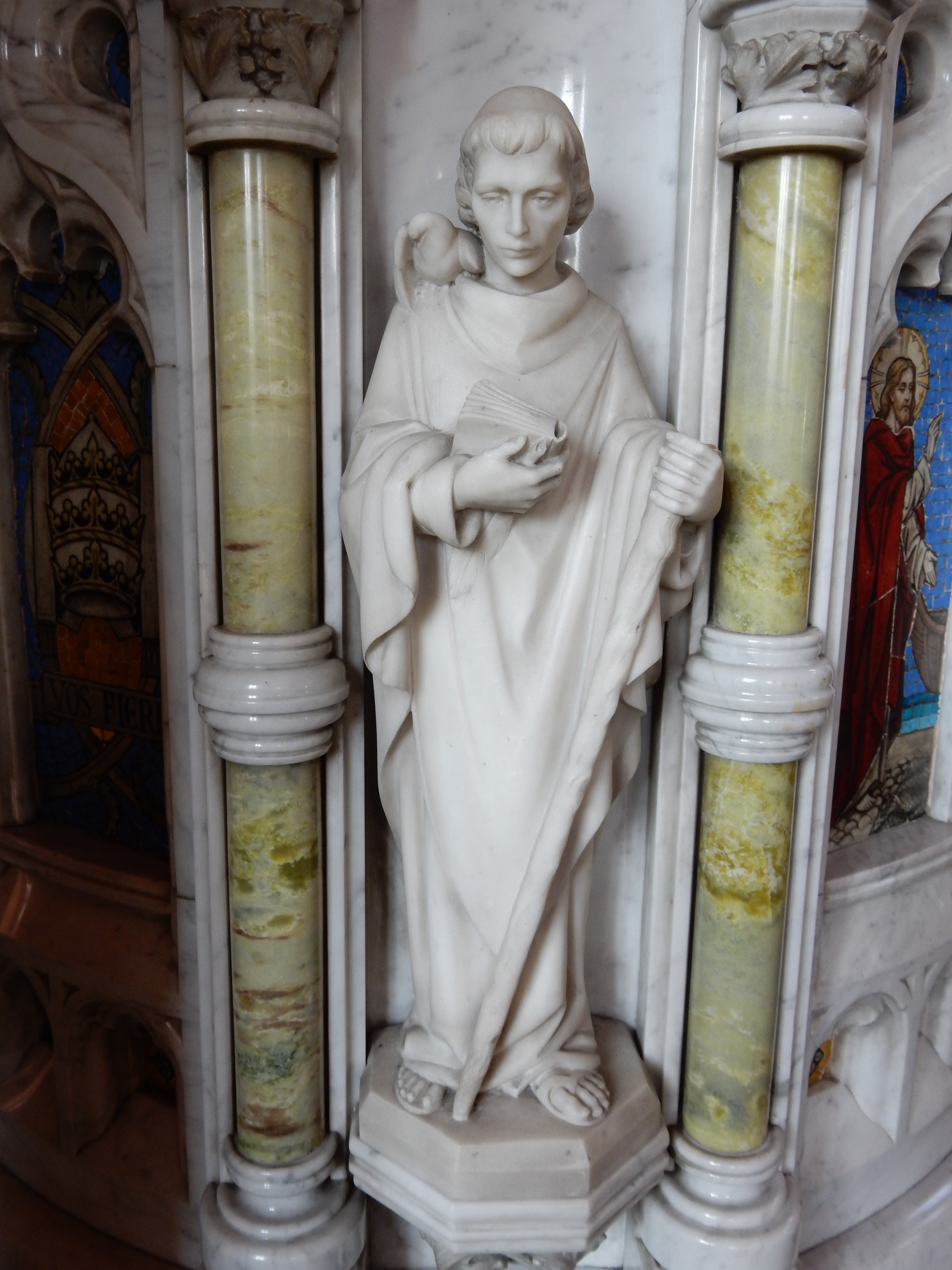 Sculpture as part of the pulpit (probably Saint John the Evangelist) 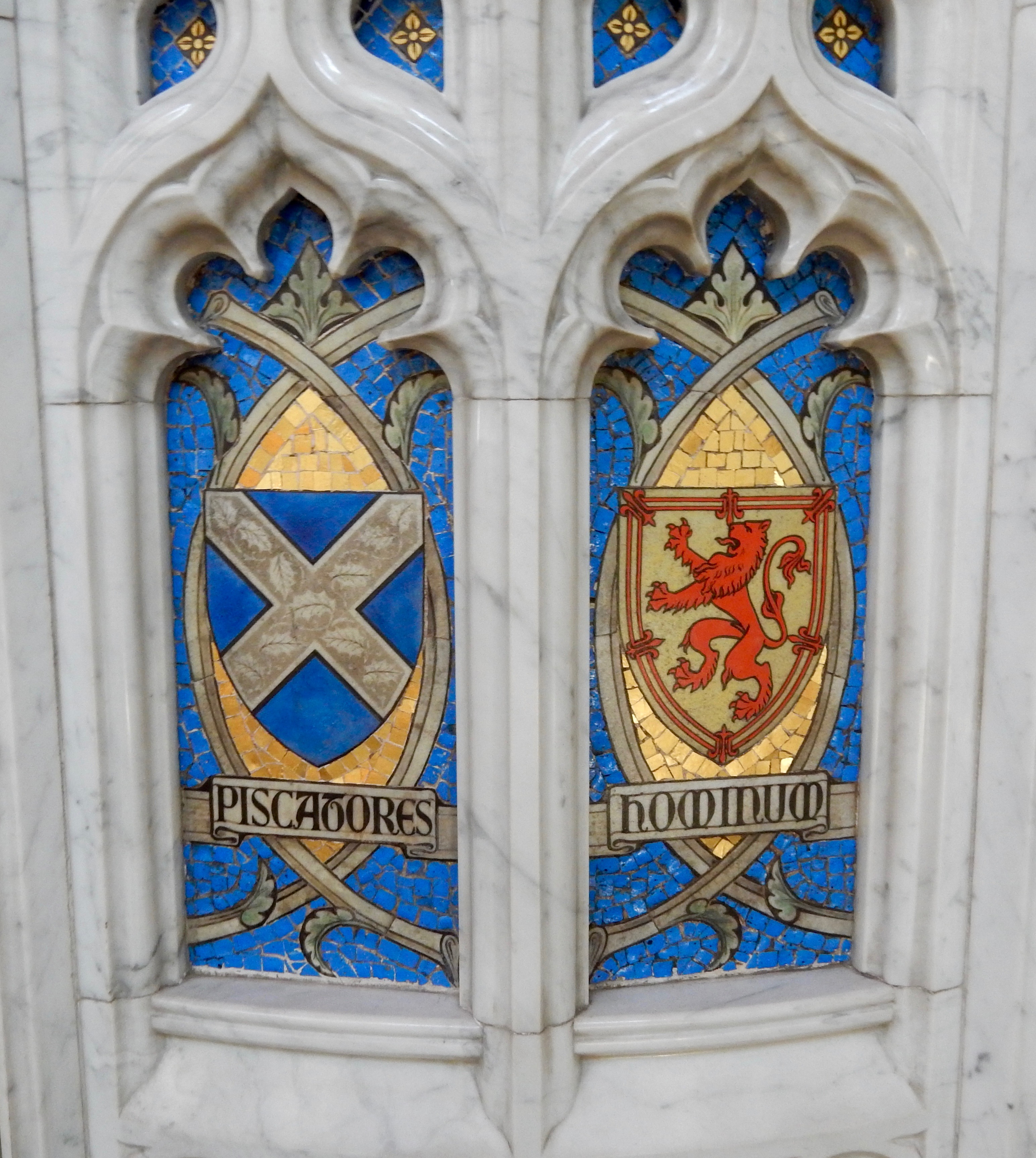 Above: the pulpit with Scottish emblems
There was a real threat in the late 1960’s of OHR church being demolished. Some in the Archdiocese of Glasgow viewed the church as too old-fashioned and in the wrong location. Fortunately, these plans for demolition did not come to completion. In 1987, OHR church was given ‘B-listed’ status as a protected building. With plans to build over 1,000 new homes in the nearby area, the future is looking positive for Our Holy Redeemer’s church as a centre for worship for years to come. 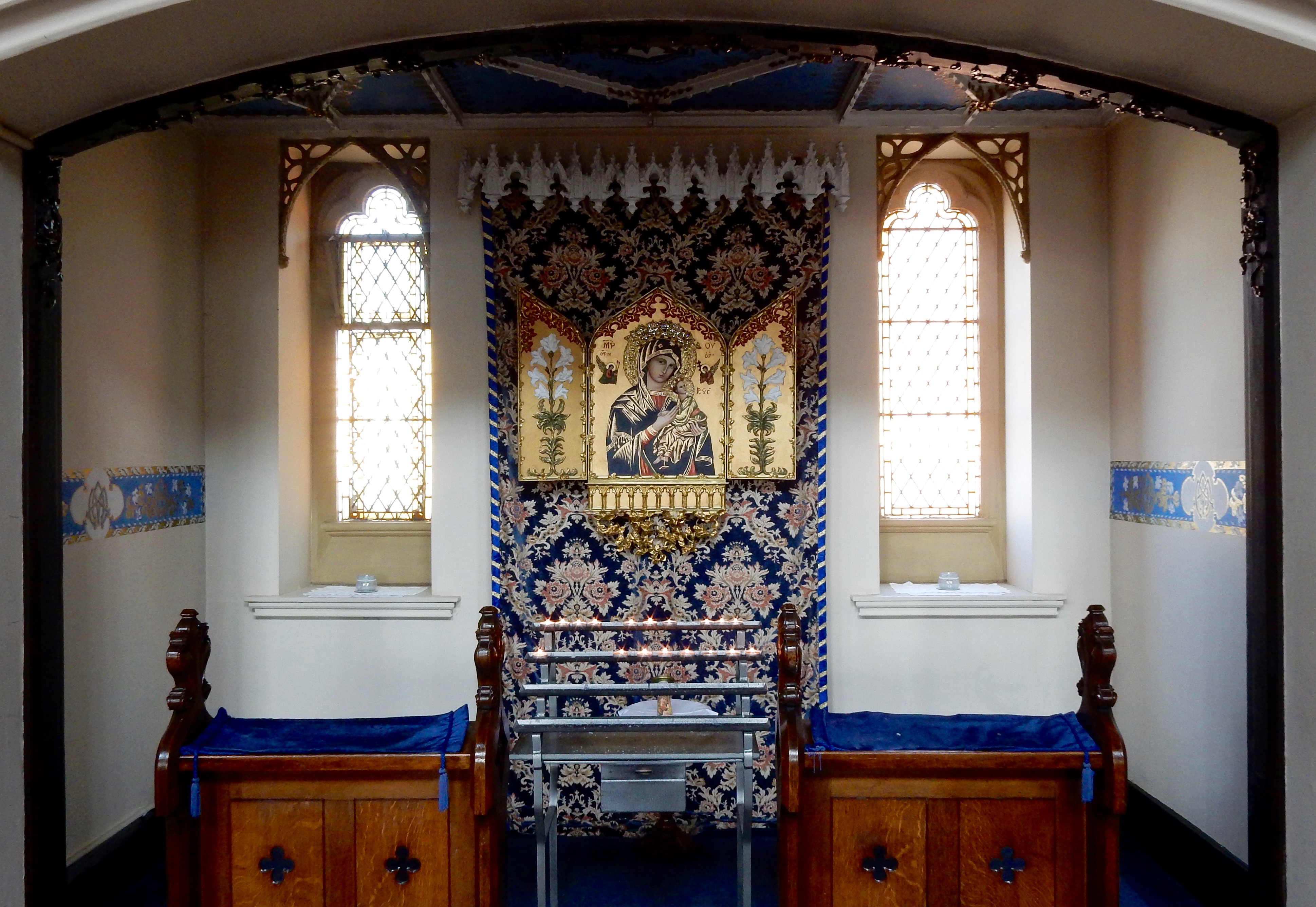 Above: Shrine to Our Lady of Perpetual Succour 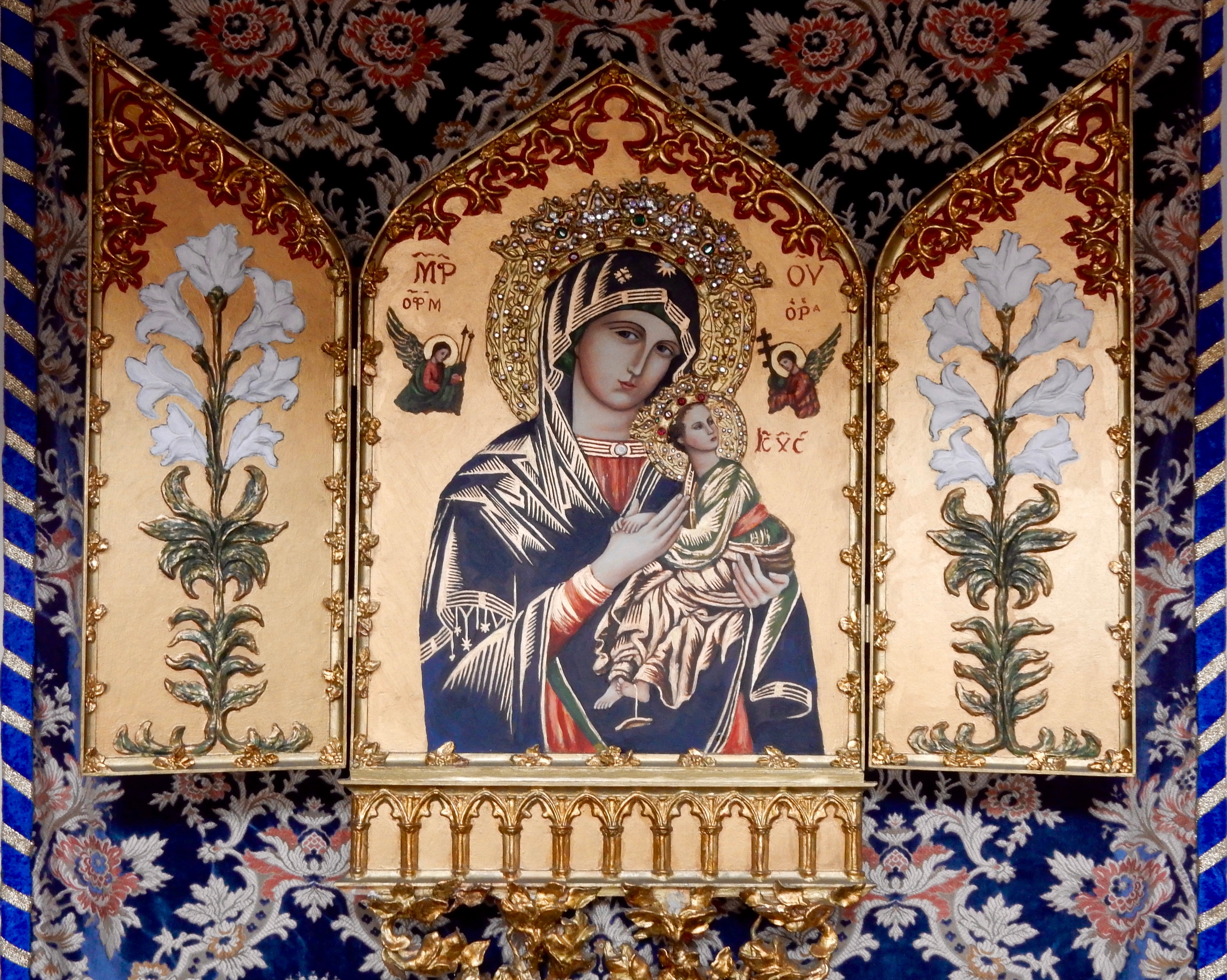 The Sacred Heart altar at the Pugin shrine in Ramsgate was designed by Peter Paul Pugin, the architect of OHR in Clydebank. John Coverdale, the Shrine director of St Augustine’s Ramsgate commented, “I like Pugin as part of the ‘new evangelisation’, because he came to the Church through architecture. It shows how the world can be evangelised through things other than direct religious talk”. Perhaps it is through the preservation and enhancement of churches like Our Holy Redeemers in Clydebank, that we can aim to be Catholic pioneers for evangelisation in 21st century Britain. 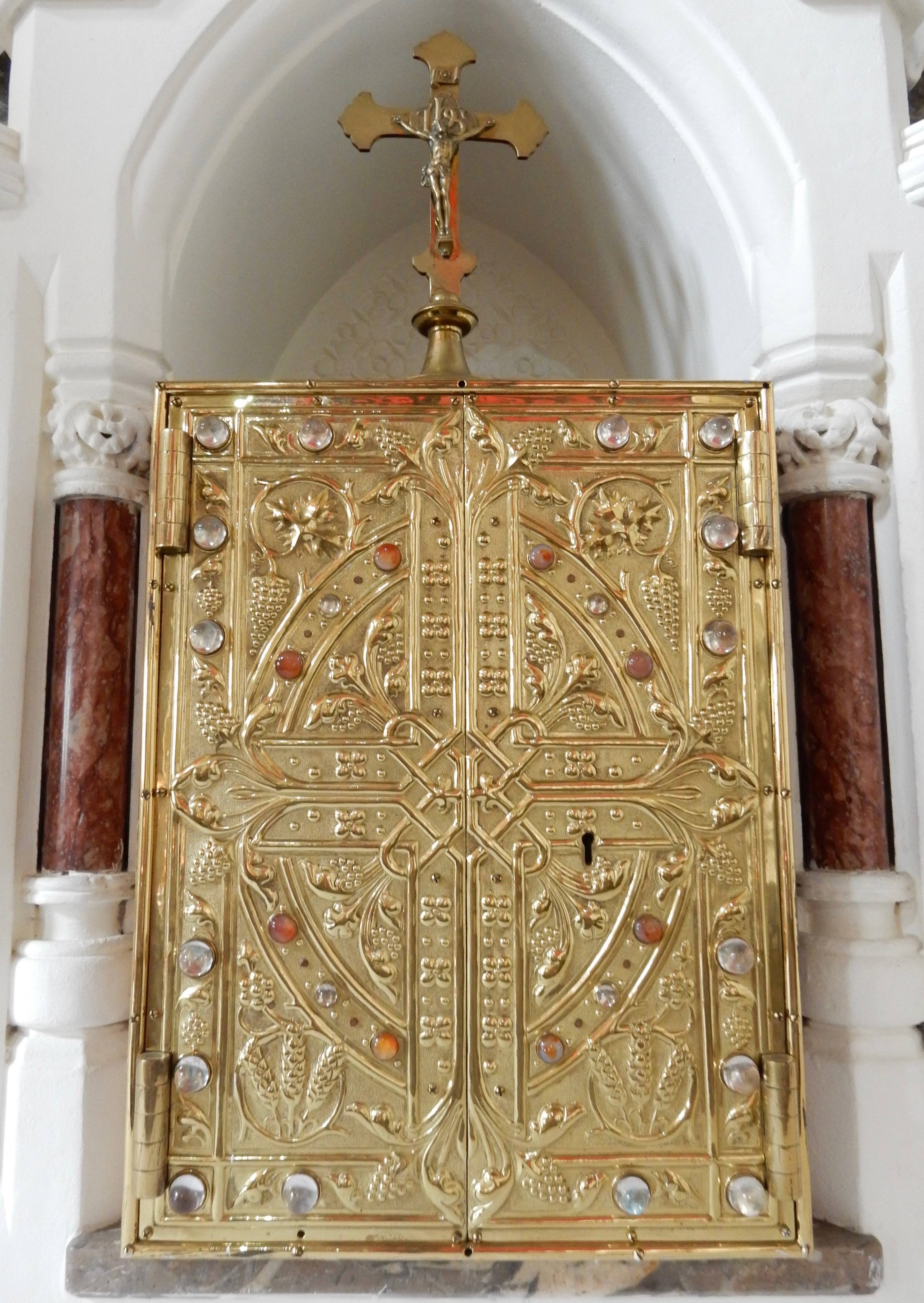 With thanks to Stephen McGinley and Suzanne Bunniss for photographs
* John Sanders, Pugin & Pugin and the Diocese of Glasgow, in ‘Architectural Heritage’ vol.8 (1997): pp.89-107.
Categories:
Interesting Churches