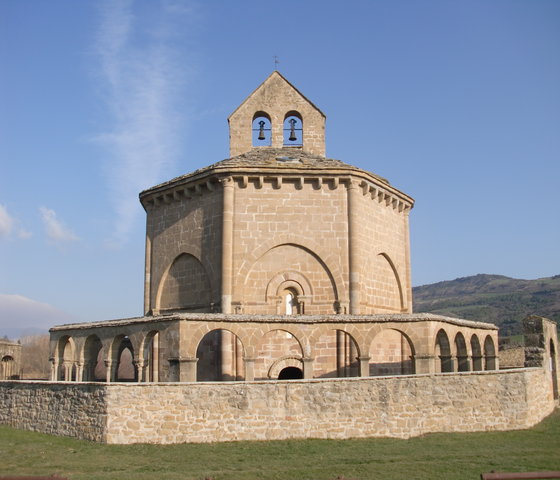 One of the joys of pilgrimage if, like me, you are not a meticulous planner, is that you are always stumbling across fantastic places that you have never heard of and know nothing about. When I walked the 1,100 miles from Arles to Santiago de Compostela in 2012, there were dozens of occasions when I came across a Church on the route and thought, ‘This place should be famous.’ Frequently, it would transpire that it was, and that I was just ignorant! 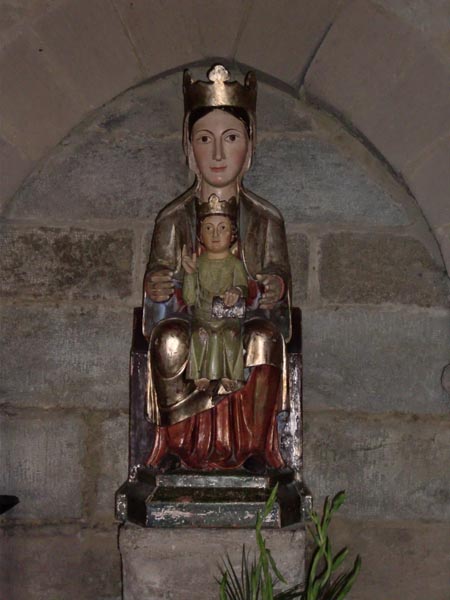 One such unexpected delight for me was the chapel of Santa Maria de Eunate, which is near the junction of two routes to Santiago: the Camino Frances and the Camino Aragones (aka Via Tolosana). It’s one of those places where there is no obvious reason for having a chapel. It doesn’t survive a now abandoned settlement and it’s only a mile and a half away from the town of Obanos, which has its own rather fine church; so it’s not bridging a large gap between Churches, like some of the other out of town chapels along the Camino. 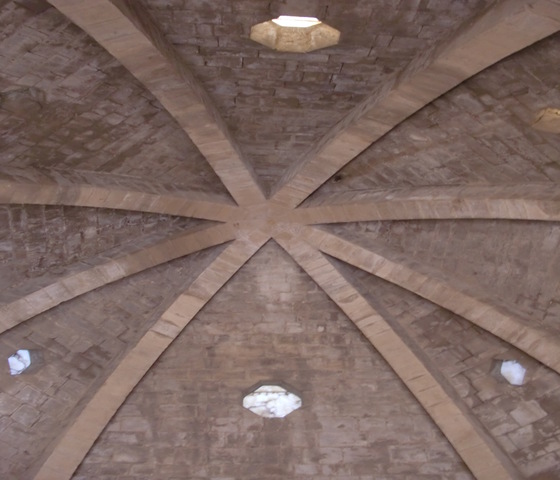 So why is the chapel there? The answer is that nobody really knows. And the architecture perplexes people too. There are plenty of unusual features which nobody can really account for. Most are agreed that the chapel dates from the late 12th century. Beyond this agreed fact theories abound, and it comes as no surprise to learn that some have suggested – as is so often the case where there the Church and the unknown collide – that it is a chapel of the Knights Templar. In this instance, there is some plausibility in the theory – it’s not pure Da Vinci Code – as the octagonal structure of the church might well owe its inspiration to the church of the Holy Sepulchre in Jerusalem. However, the most popular current theory is that the chapel was intended as a burial place for people who had died on the pilgrim route. This fits well its location surrounded by nothing but fields, and the fact of deaths on pilgrimage is still a reality to this day, albeit much rarer. 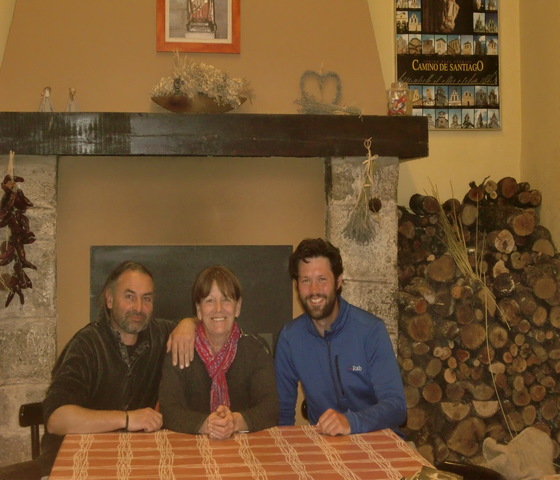 My hosts for the night and me
The place has a wonderful sense of peace and I spent a wonderful evening and night here. It was my last night on the quieter Camino Aragones before it merged into the busier Camino Frances and I had the privilege of being the only pilgrim staying in the adjacent refugio (cheap accommodation for pilgrims), a 13th century barn, that night. My only company was the kind husband and wife who were staying there as volunteers for a month to look after the chapel and to host pilgrims. 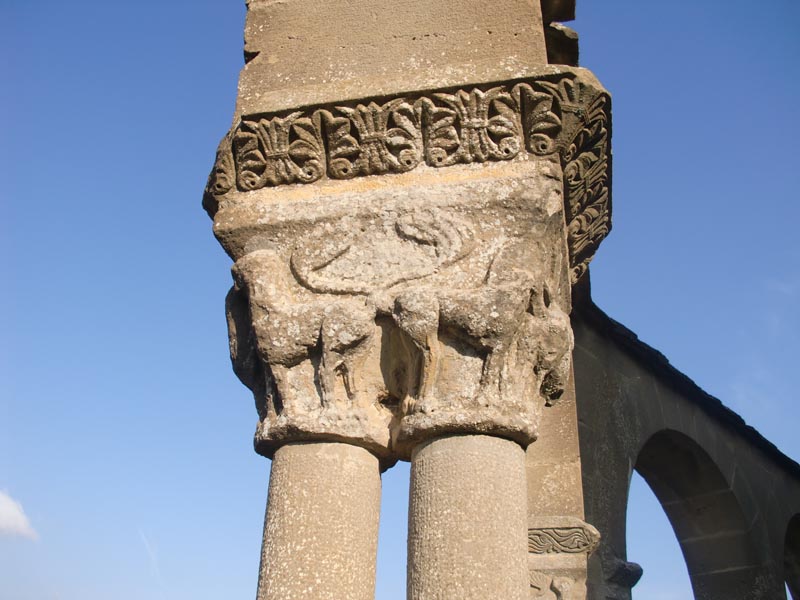 It’s all too rare an experience where just about the only thing you can do is the best thing you can do: pray. There are no distractions here. You get a real sense of smallness as you think of the hundreds of thousands of pilgrims who have passed through this way before and contemplate that for others this may have been their terminus in this life. 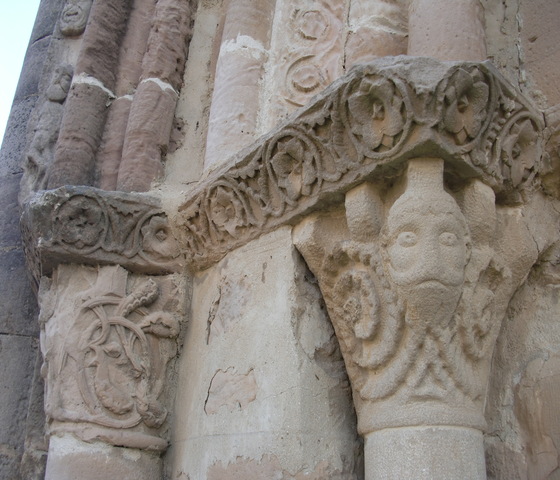 Amongst the most unusual architectural features is the octagonal ring of arches which surround the chapel. It is not thought that they were ever linked by roofing to the main body of the chapel, but they may well have been linked to out-buildings which have now disappeared. Three sides of the octagon have columns set in pairs and topped by capitals. These include masks with the tendrils of plants emerging from their mouths; lions in a stand-off; and a Crucifixion scene. 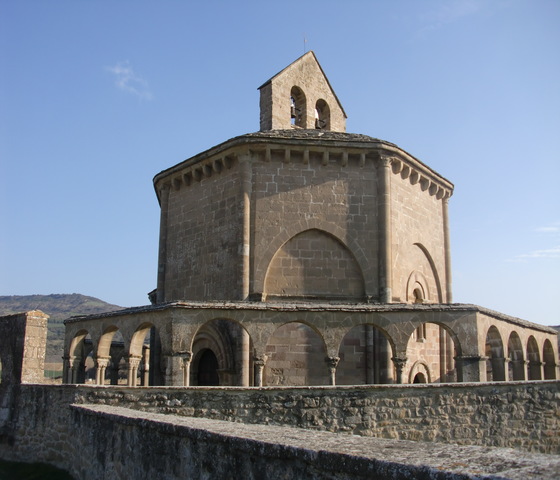 The north doorway to the chapel is also a feast for the eyes, with a succession of human figures, masks, monsters, and plant patterns. However, it’s the interior of the chapel which is the biggest draw for me. It is simple and solid, but there is also something delightfully wonky (a technical architectural term) about it. It’s an octagonal and yet not quite symmetrical, and the apse is not quite square-on to the nave. It’s a little like the Christian life: we offer our best to God and we don’t get it quite right, but there is still beauty and a reflection of God’s glory in it. It’s not the false humility, characteristic of some Church architecture, where we deliberately offer much less than our best to God, as if this might somehow be pleasing to Him. It’s the beautiful asymmetry of our best and God’s gift of Himself present in the Tabernacle. 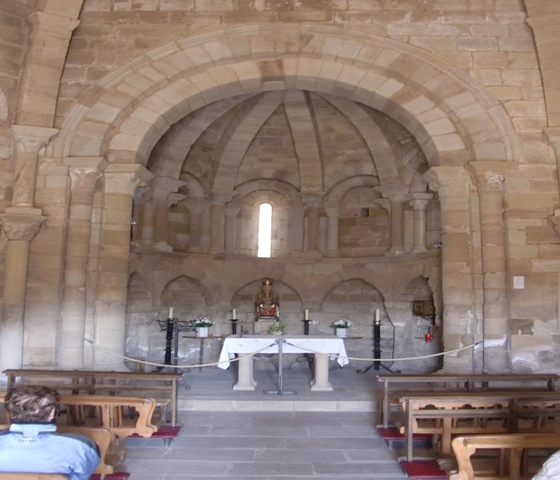 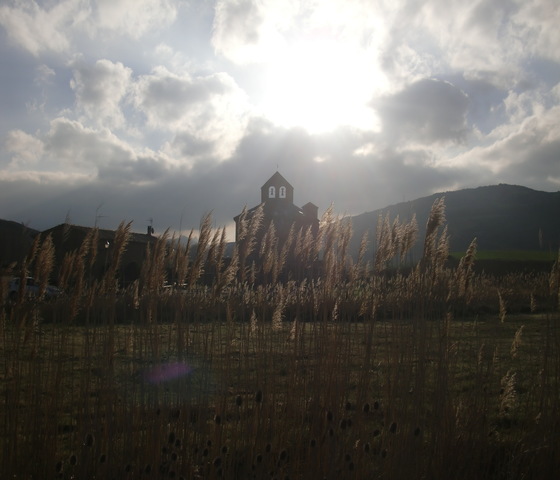