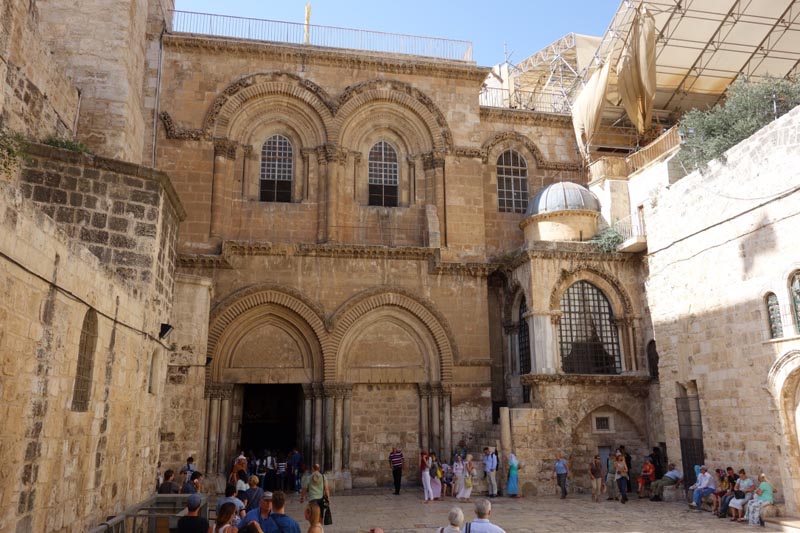 A church might be considered interesting for a plethora of reasons. One might consider it interesting because of certain architectural features, or because of its historical significance, or because it ministers to a particular group of people. For me, the Church of the Holy Sepulchre in Jerusalem fulfils each of these points.

It is the Church that contains the historic sites of Our Lord’s Crucifixion and Resurrection. In his marvellous book, Jerusalem, Simon Sebag Montefiore says that it is likely that the site of the church is the genuine site of these key events in the life of the Church, as it has been venerated from the very earliest of times by Christians. I have had the privilege of visiting Jerusalem on three occasions, with the most recent visit being at the end of June of this year. On another visit before I entered the Dominican Order, I spent three weeks living in the Old City of Jerusalem, and attended Mass more or less each day at the Holy Sepulchre. I consider it now one of my very favourite churches. 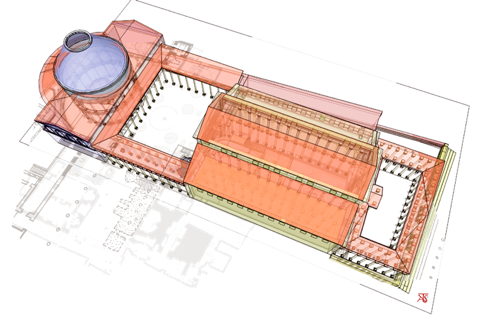 The first church was built on this site by Constantine after he demolished the pagan temple dedicated to Venus. His church was inaugurated on 13 September 335 and boasted a great basilica with five naves separated by pillars and columns supporting a ‘gold coffered ceiling’. A pilgrim would have entered a courtyard with archways, and would have before them the impressive Anastasis mausoleum. Above it was the large dome.

During the Persian conquest of 614, the church was pillaged and suffered much damage. It was during this time that the relic of the True Cross had also been taken, only to be recovered in 630. From 648 Jerusalem came under Muslim rule, but Christians were still able to make pilgrimage to the church.

In 1009 Caliph al-Hakim gave orders for all churches to be destroyed. This proved fatal for Constantine’s basilica, which was singled out in particular, and destroyed beyond recognition. 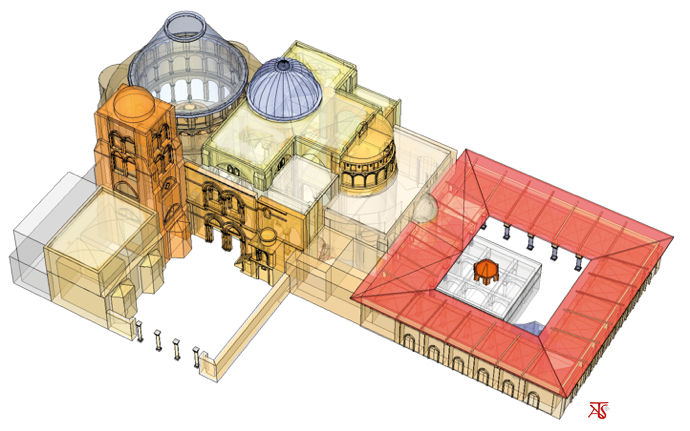 The Church of today owes much of its existence to the Crusaders. They constructed a church during the 12th century with a different shape to Constantine’s, and built in the European Romanesque style.

Since the fourteenth century, the Holy Sepulchre’s Catholic representatives have been the Franciscan friars, who continue to have custody of the holy sites across the Holy Land. The Church is shared with many other ancient Christian churches, such as the Greek Orthodox and Armenians, as well as the Copts among others. Each have a designated area in the Church, and take it in turns to have services at the various shrines within the building.

For many people I know who have visited the Holy Sepulchre tend not to share the same positive sentiments I have of the place. They are often dismayed by the chaotic atmosphere of the complex, with mob-after-mob of tourists ploughing through the building, taking pictures, and generally making a racket. On top of that, you have the more-often-than-not grumpy clergy from the various ancient churches hurrying persons on as they venerate the holy sites associated with Our Lord’s death and Resurrection, occasionally shouting at a bemused tourist who has wandered in wearing shorts. If you are there in the evening, you can partake in the unforgettable experience of being caught up in a cacophony of Gregorian, Armenian, and Greek chant, as each group fights to be heard over the other; the Latins have the organ which tends to get the upper hand against the Easterns!

On my latest visit, I was standing in the entrance area of the church, when, on top of the general noise of the place, a small tractor drove through with a carriage carrying broken rocks (the church is undergoing restoration thanks to the generous support and financial contribution of King Abdullah of Jordan). Not that is a daily occurrence, but there have been instances of fights breaking out between clergy from the different churches, serious enough for the Israeli authorities to enter the church to settle the conflict. 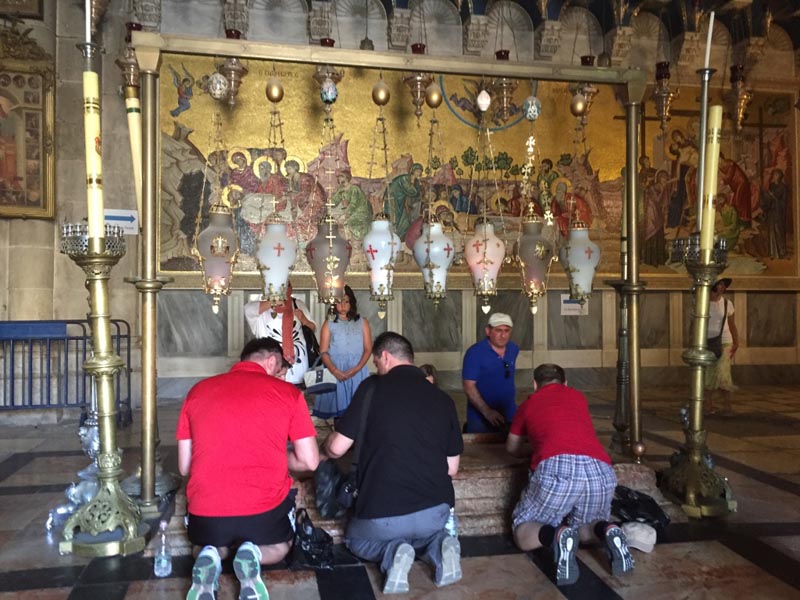 (As you enter the church, you encounter what is venerated as the stone on which Our Lord’s body was anointed before burial)

I probably have not portrayed the Holy Sepulchre in a particularly positive light. The situation there shows up the real and painful divisions that exist in the Church here on earth, how even in the midst of these sacred sites associated with Our Lord, we are divided and cannot share of the gift of unity, which He lovingly gave to us: the Eucharist. But if one can see through the chaos of the place, so reflective of the world (and dare I say, the Church) in which we live, one encounters a profound peace, a peace that can only come from the belief in what happened on that site over two thousand years ago. God, who became Incarnate in the person of Jesus Christ, was there. Right there. It was there that he offered his life for us, his friends, whom he sought to integrate into the fullness of the life of the Godhead. It was on that site that heaven was opened up to us. We encounter this mystery each time we celebrate Holy Mass; but we encounter this mystery, perhaps, in a more tangible way whilst inside the Church of the Holy Sepulchre. One also realises that one stands in continuity with centuries of Christians who have visited that site, continuing the venerable and time-honoured tradition before the coming of the Messiah, of making pilgrimage to that most hallowed city of Jerusalem.

I highly recommend a visit to Jerusalem, and in particular, to the Church of the Holy Sepulchre. You have to be immensely patient with the place, but if you manage it, I think you might also come to share the same great love I have come to have for it. It really is a church like no other, for so many, many reasons! 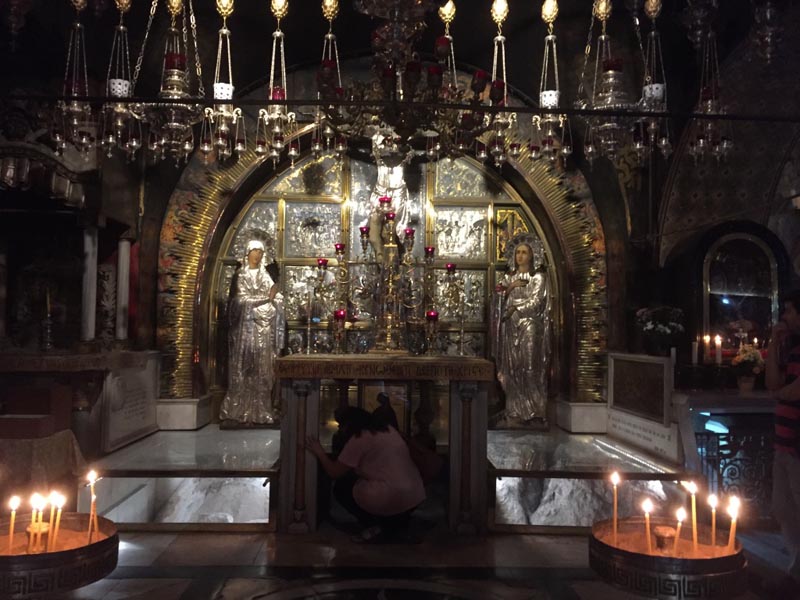 (Golgotha. You can see through the glass on both sides of the altar the rocky terrain. There is a space to touch the rock beneath the altar, as the lady in the photograph is doing) 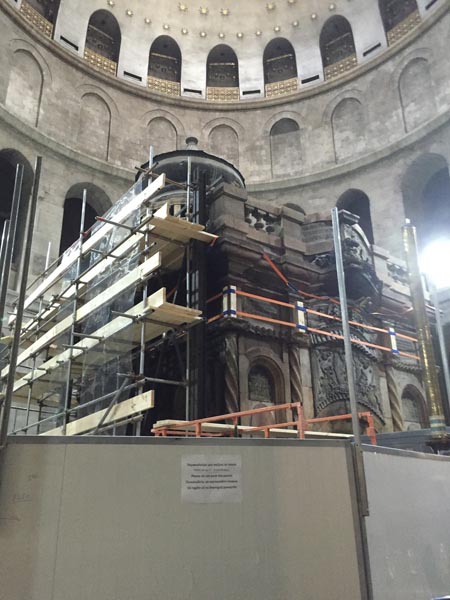 (Encased in scaffolding is the tomb of the Resurrection, which is under renovation at the moment) 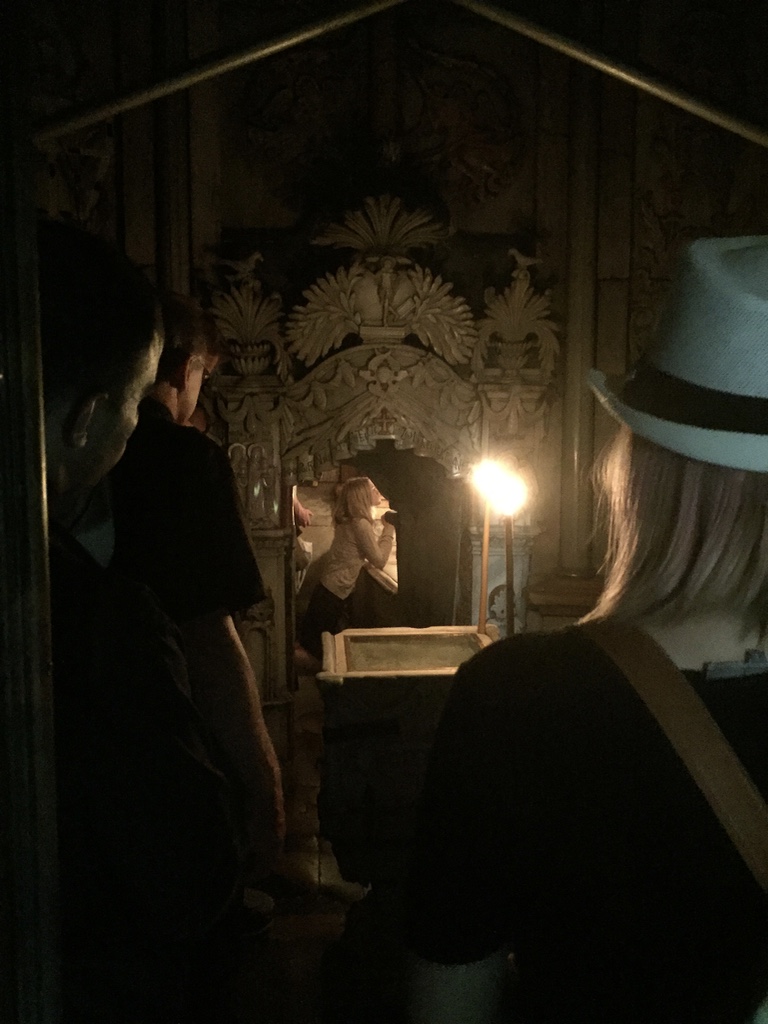 (Inside the tomb made up of two sections. The further one, where you can see a lady kneeling in prayer, is the place of the Resurrection of Our Lord)