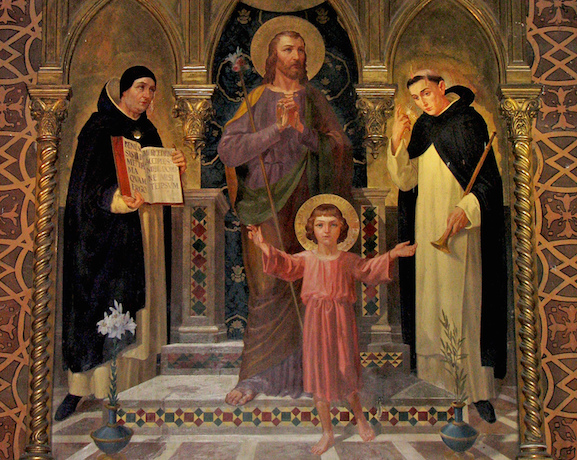 Yesterday, we heard about the ancestors of Jesus, including all those reprobate characters, noting that the genealogy of Christ was framed by two surprisingly good men: the man of faith, Abraham, at the beginning, and at the end, Joseph, the just man.

Now in today’s Gospel, St Joseph is our focus. Apart from this short passage, we actually know remarkably little about him. He was a descendant of David, a carpenter or builder in Nazareth, who became the husband of Mary and thus the adoptive father of Jesus. (Perhaps that’s enough to be going on with!)

I like the imaginative reading of St Francis de Sales, who takes the text of a Psalm – “Do good, Lord, to those who are good, to the upright of heart” (Ps 124:4) – and infers that since the Lord did good to Joseph (after all, he was blessed to have God the Son and the Mother of God in his family, the Holy Family no less!), so, since God was so good to Joseph, therefore Joseph must have been “good and upright of heart”.

It’s not a strictly logical argument, but it tallies with what St Matthew has told us today: Joseph was “a just man”, an upright man. He was “unwilling to put [Mary] to shame” and so “resolved to send her away quietly” – a very decent thing to do. But justice is much more than decency. And the Gospel gives us a clue: the real evidence that Joseph is a just man comes in the last verse: “When Joseph woke from sleep, he did as the angel of the Lord commanded him”. Joseph is obedient to God, he conforms his actions to the holy will of God, and in so doing becomes truly blessed.

So we can see that justice is much more than decency. It’s even more than fairness, despite what some recent philosophers say. Ancient philosophers understood this: Plato took a whole book to ask ‘What is justice?’ and to conclude that he didn’t know! Other philosophers have fared better: Aquinas, building on Aristotle, defines justice as “a habit whereby a man renders to each one his due by a constant and perpetual will” (2-2.58.1). That’s very good, but it might need unpacking (another time). To make this fit the Biblical picture of justice, I think we can simplify quite a bit and say: the just man is the person who does what he should. He does what he should as an individual, as a member of society, and as a child of God. In fact, the Bible often treats justice as a kind of summary of all the virtues (e.g. Ezek 18:5ff).

As such, ‘justice’ becomes a word too small for its own definition. Because surely the summary of all the virtues is something we would rather describe, in more explicitly religious terms, as righteousness or perhaps holiness, or, of course, love. God alone is just, because God alone is righteous, holy, perfect love. That’s why the prophet Jeremiah says the name of the Messiah will be: “The Lord is our Righteousness.” While God is just, we are not just, we are not righteous, because we do not do what we should, and we do what we should not. All of us have fallen short of the glory of God.

So, if St Joseph is just, this is entirely thanks to God, because God came close to him. In this Year of Mercy, we can be tempted to think of mercy as opposed to justice. But really we should think of God’s mercy as the fact that he gives us justice. God comes close in his justice, to impart justice. He gives us a share in his justice (his righteousness) to make us just and righteous.

We’re familiar with the Virgin Mary as a sign of prophetic fulfilment, especially in Advent: “a virgin will conceive and bear a son”, and so on. But perhaps we should also think of Joseph as a bearer of Messianic prophecy: he is a just man whom God chose to nurture his son Jesus Christ, to introduce in a human way to us the human being who is God-With-us, the Lord-Our-Righteousness.

We Dominican friars of England and Scotland have gathered in Oxford for our Province Assembly to discuss our life and mission, ahead of our Provincial Chapter in April. I think St Joseph can be a good role model for our deliberations, because we need our talk to be just, rather than just talk. In the end we have to remember that justice is a concept too big for its word; that the justice of God is his righteousness, his mercy, his peace, his love; and that all our attempts (yours as well as ours) to preach God’s justice and to build a just world must point to God himself as the goal of everything – because he is also the origin.