Litany of Loreto – Help of Christians

By Br Andrew Brookes O.P.
116
Here we have a title that does not contain doctrine that needs unpacking, or symbolism that needs uncovering, or biblical allusions that need exegesis! We are simply being told that Mary, by her prayers, helps Christians here and now. The straightforwardness, even directness of the title, implies or suggests to me a practicality about Mary and the impact of her intercession. I think this sits well with the woman who noticed that a couple was embarrassed by running out of wine at their wedding feast and asked her son to help (John 2: 1-12). This is first recorded request Mary made of Jesus and in a way is an intercession, and thus an anticipation of her ongoing prayer for all of us. It also suggests that we can be direct in addressing Mary and confident that she grasps the reality of daily life, its needs, and the problems it throws up. Daily concerns are not too trivial to be taken to Mary in prayer.

However, the title’s doctrinal and linguistic simplicity is countered by what is seen by many today as its perplexing and even controversial history. The title was adopted in connection with the military victory of Catholic forces against a Muslim Turkish (Ottoman) force seeking to dominate the Eastern Mediterranean and even Europe as a whole. The battle, named Lepanto, was fought on 7th October 1571 and Pope St Pius V, a Dominican, was heavily involved in organising the force and also in urging the faithful to pray the Rosary for victory. In fact, the feast of Our Lady of the Rosary, formally called Our Lady of Victory, is still kept on this day in connection with these events, victory being attributed to Mary’s intercession sought by Catholics in prayer and in praying the Rosary in particular. The title and intercession “(Mary), Help of Christians” was first used in connection with these events.
This raises difficult questions about Mary (and the Papacy) and war. Does the Biblical presentation of Mary sit with a woman who would back a military cause? Would Jesus? He refused to fulfil his mission by military means. If ‘no’ is the answer in either or both cases, then does this rather limit the practical help Mary will give us, or that we can ask of her? As such, does it undermine this title and indeed our general confidence in God, assuming our cause may reasonably be considered just? I will leave you to ponder these difficult issues, but the Magnificat (Luke 1:46-55) offers additional food for thought: how did Mary understand this to be fulfilled and did her understanding change during her life and even on entering heaven where she intercedes for us? 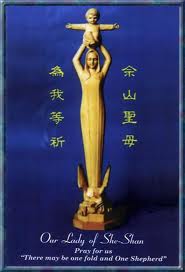 In a modern context it is also striking that Mary is addressed as help of Christians, not just of Catholics. It seems to me to imply, even to state, that Mary and her prayer blesses not just Catholics, not even just Christians that actually ask for her prayers, but all Christians including therefore those who ignore the prospect of her intercession helping them. (The battle of Lepanto was seen to benefit all the Christians of Europe.) This is worth reflecting on. Mary is often seen as on obstacle to ecumenism but I think she is concerned for it and can be a very positive focus for it and the building of a fuller expression of the unity of the Body of Christ of which she is the Mother. Our Lady, help of Christians, pray for us!
We might also remember to pray to Mary for Muslims, and to help us in our relations with them, remembering that they accept and honour Mary’s purity from the beginning of her life and her virginal conception of Jesus and her radical obedience to the will of God. May her prayers help us all live in peace and come to recognise God in her son, Jesus, and follow him in obedience to the will of God.