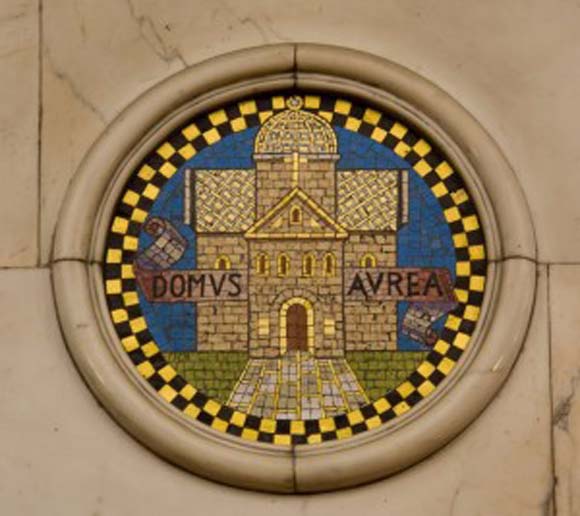 Litany of Loreto – House of Gold

In around 64 AD, the emperor Nero built himself an astoundingly lavish palace in the centre of Rome, the ‘Domus Aurea’ or ‘House of Gold’. Although the palace was destroyed and plundered after Nero’s death, legends of its magnificence have tantalised historians for centuries. Interestingly, the Litany of Loreto uses this same title – Domus Aurea – to refer to Our Lady, and I don’t think it is merely co-incidental.
Rather, this title is accorded to Our Lady to draw a sharp contrast between Nero’s short-lived House of Gold (destroyed in 68 AD), and Mary, whose name is continually praised, for “all generations will call [her] blessed”. The self-aggrandizement of Nero’s structure is further juxtaposed with the humility and “lowliness” of Mary. Moreover, Nero’s building stands for corruption and decadence while Mary is immaculately conceived, and remained a pure virgin throughout her life. It is precisely Mary’s incorruptibility, endurance, and purity that is thus symbolized by gold. She, unlike Nero’s false ‘Domus Aurea’, is the one truly worthy of this title. For “unless the Lord builds the house, in vain do its builders labour” (Psalm 127:1).
Gold, of course, is also a symbol of nobility and is associated with royalty, as is fitting for the Mother of Christ the King. Above all, gold is also a symbol of faith which is tested and proved in suffering. As St Peter says: “Now for a little while you may have to suffer various trials, so that the genuineness of your faith, more precious than gold which though perishable is tested by fire, may redound to praise and glory and honor at the revelation of Jesus Christ” (1 Peter 1:6-7). And Our Lady, whose heart is pierced with a sword (Luke 2:35), is pre-eminent in such faith.
In 1 Kings 6:20, the Holy of Holies of Solomon’s Temple is described as a perfect cube, overlaid with gold. Alluding to this in the Apocalypse of St John, the heavenly Jerusalem is also described as a perfect cube made of pure gold (Apocalypse 21:16-18). Here again, gold is a sign of purity and eternity, but what is especially significant is that both these golden places house the presence and glory of God. So, the title ‘Domus Aurea’ re-affirms that Mary is the temple within whom the incarnate Word dwells, and as such, she is “full of grace”, and preserved from sin from the moment of her conception. Therefore, St Thomas Aquinas says that “as all in the temple was covered with gold, so was everything in the beautiful soul of Mary filled with sanctity”.
Hence, in the Votive Mass of the Blessed Virgin Mary, Temple of the Lord, we say that God “made the Blessed Virgin Mary [his] Temple without compare, a house of gold adorned by the Spirit with every kind of virtue, a royal palace resplendent with the presence of the One who is Truth”.