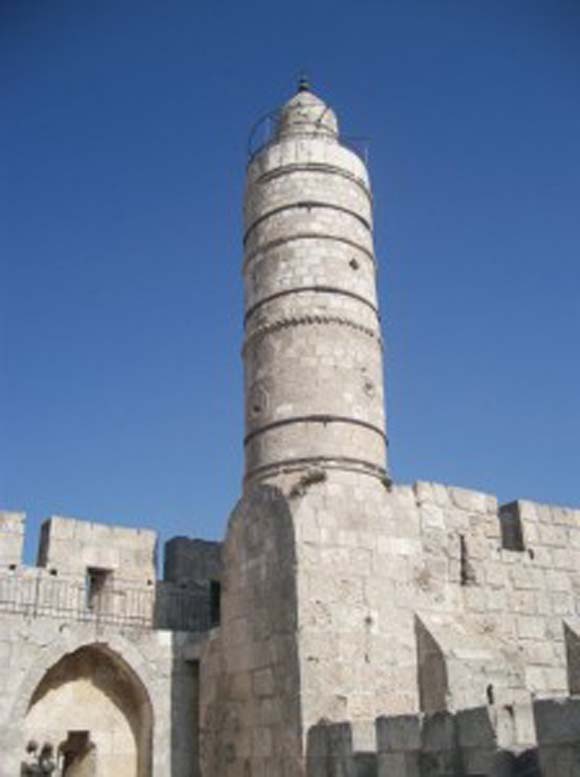 Litany of Loreto – Tower of David

The scriptural basis for this Marian title is Song of Songs 4:4, ‘Your neck is the Tower of David, built on layers, hung round with a thousand bucklers, and each the shield of a hero.’ Here it is in the first place a reference to the physical beauty of a woman who it would seem had – in the eyes of her lover – a tall and elegant neck. This was made still more beautiful by the necklaces that adorned it. He continues in verse 9,‘You ravish my heart with a single link of your necklace.’ The author of the Song of Songs is comparing the neck of his lover with a military tower put up on or near Mount Zion to defend Jerusalem. It would seem, at least some of the time, that it bore the shields of those who could be called upon to defend the tower and city in time of military threat.
Two lines of development and application then seem apparent with regard to Mary. Overtly the one is based on beauty, and physical beauty at that, and the other on military prowess, albeit a defensive one. The first has tended to be spiritualised and thus been seen as a reference to Mary’s spiritual beauty, and of her being adorned with many virtues. The second is seen symbolically to refer to Mary in terms of the defence and protection she offered Jesus, from the time he was in her womb, then as a baby, and then growing up. Sometimes added to this is a sense of her life-long ‘defence’ of her virginity – though, it seems to me, that her life long defence by sinless living of her immaculate conception might be a fuller meaning. Also sometimes added is the usefulness of a theological grasp of Mary (as virgin mother of God) in defending Christological doctrines.
I think it is also worth pondering whether these two lines of reflection, beauty and military prowess, pull Mary in different, even irreconcilable, directions? Well, a graced and virtuous woman can be one who is full of valour, and strength, and concerned to defend life and promote justice. And interestingly it is, I think, this combination that accords most with the Biblical presentation of Mary. Mary, full of grace, takes on the risk of being the mother of Jesus, despite the risks to her reputation, marriage, and life, and is someone, based on her Magnificat, who was passionate about God bringing justice and freedom from oppression to God’s people. (Jesus declared a similar message: for example see Luke 4:16-22.) Something of such  a combination of beauty and valour is also reflected, I think, in the imagery of Revelation 12 which presents a woman beautiful enough to be crowned with the sun and standing on the moon, but also in conflict with Satan. The woman is often seen as a representation of Mary, as well as of Israel, and of the Church more generally.
The title ‘Tower of David’ can thus express the beauty of the grace given to Mary, seen specifically as a spirituality that equips her for spiritual warfare, and this as a combat undertaken to bring in the Kingdom of God, with its saving righteousness, justice and liberation, and to defend us from sin and Satan. This is a combat, through her intercession, that Mary still wages for us and the world we live in.