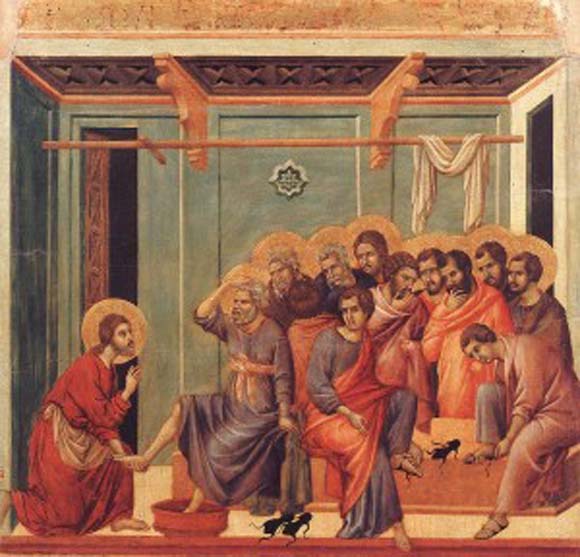 Godzdogz
Home  /  Godzdogz  /  MAUNDY THURSDAY – As One Who Serves

MAUNDY THURSDAY – As One Who Serves

There are many ways of communicating with each other. Of course, the obvious way is through speech. But sometimes what we want to say seems to be difficult to capture in words, perhaps because the words are commonly misused, or trivialised. I suppose one of those words is the word ‘love’. It’s a word that is used very freely, and very seldom seems to be associated with anything more than emotions. One minute we can talk of loving someone or something, and then after some time speak in terms of dislike or even hatred. For the use of the word ‘love’ to be credible, it must be backed up by something else – by acting consistently well towards a person, to care for their well-being, and so on.
It is noticeable that Jesus doesn’t say anything at the beginning of today’s Gospel. He simply prepares himself to wash the disciples’ feet. Even when Peter kicks up a fuss, he doesn’t provide an explanation of what he is about to do. He uses a few words to steady him, then he carries out his task. It is only afterwards that he explains that this was an action of service, of love, from the one who is their Master, their Lord. And this is something that they are to imitate in their leadership of others. It is to be leadership through service.
In Paul’s First Letter to the Corinthians we see a similar model of service. Paul doesn’t instruct the Corinthian Church with his own ways. He gives them something which he received from the Lord. He recognises that his oversight of the Corinthian Church is not about imposing his own will, but about pointing them in the way of the Lord. He wants them to do what Jesus asked them, and indeed asks the whole Church, to do: to celebrate the Eucharist, and to partake of his body and blood.
In Jesus then, we have an example of how to lead. His example shows us that leadership is about service of others. As soon as that gives way to manipulation, control or domination, it becomes a distortion. It becomes emptied of love. At a time when those who exercise ministry in the Church is under greater scrutiny than ever, it is important to return to these foundational principles. In the midst of the scandals and difficulties, it is clear that the call to conversion and a closer following of Christ’s service of others is louder than ever. As Christians, we are reminded that we are closest to God when we are doing what Jesus taught us to do. It is in this kind of service, and in gathering to receive strength from his body and blood that we can be a sign to the world of God’s love and mercy